Anti-competitive price cuts to build a dominant market position? The founder of Standard Oil would approve 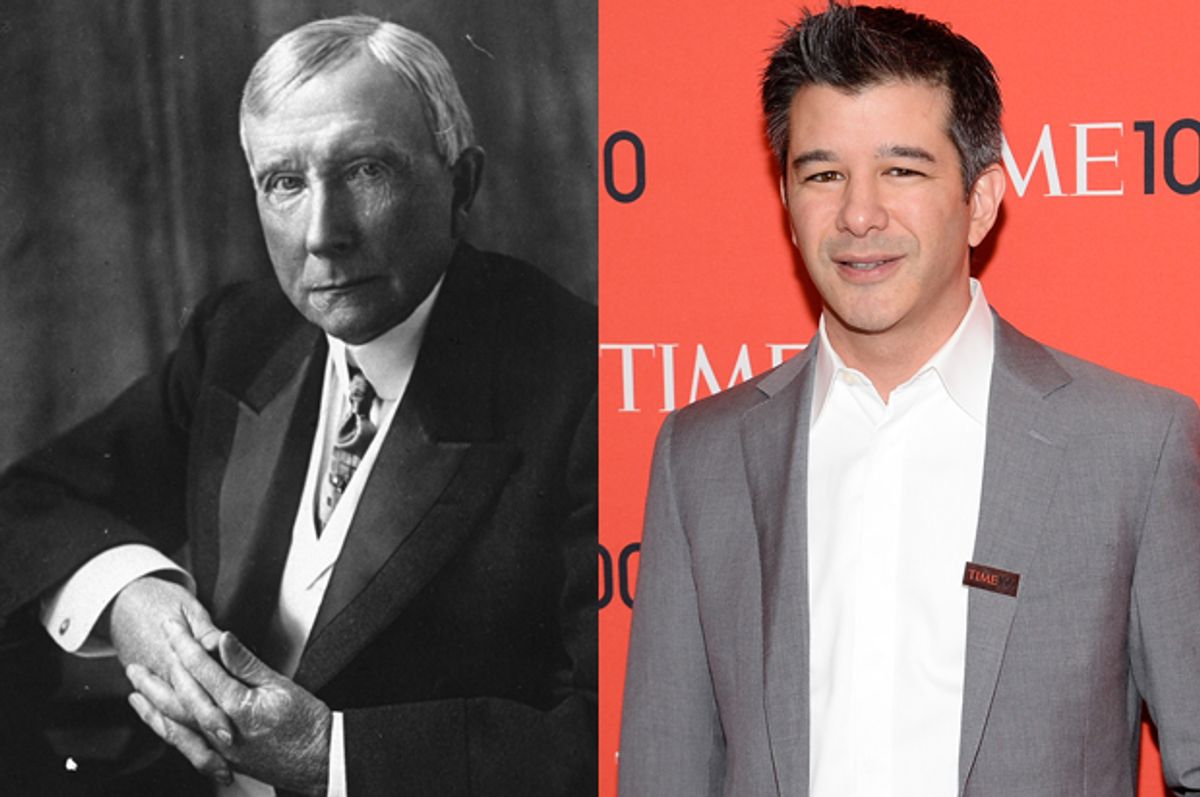 Somewhere, John D. Rockefeller is smiling. Fueled by dramatic price cuts, UberX rides in New York are now cheaper than taxis, boasts a blog post by the company published on Monday. Similar price cuts have already been rolled out in many other cities;  in San Francisco, UberX rides cost an amazing 45 percent less than taxis. The longer this keeps up, the sooner the obvious denouement: The traditional taxi industry, as we know it, is doomed. But what comes next?

Rockefeller would be smiling because he would be quick to recognize a winning display of anti-competitive market behavior. The founder of Standard Oil built his monopoly by exploiting  size to leverage discounted access to railroad transport. Such economies supported price cuts his competitors couldn't match. Travis Kalanick, founder of Uber, is employing a slightly different strategy; Uber is straightforwardly leveraging its access to seemingly unlimited venture capital to break economic rules. Sitting on $1.2 billion in cash, Uber can lose money on every single ride for a long, long time. In some markets, Uber is even paying drivers a bonus to make up for what they are losing in price cuts (though that does not seem to be the case in New York).

Kalanick hasn't minced words about his antipathy to the existing taxi industry, but Uber is also quite obviously focused on its tech start-up competition. With bigger pockets than the likes of Lyft or Hailo or Sidecar, it's within reason to believe that Uber could triumph over all.

And maybe it should. Emily Badger's fabulous investigation of the clash between the new ride-sharing companies and the taxi industry in Chicago makes clear that the old system of tightly regulated taxi  transportation system has little hope of withstanding the assault from Uber and its brethren. There are obvious advantages for consumers. The rules that currently exist were not written for an era when anyone can envisage using a smartphone to hail a cab. Accommodations will be made. Change is inevitable for the transportation sector as it was for the U.S. energy industry when oil started gushing out of the ground in Pennsylvania in the 19th century.

But suppose Uber does come out on top. What happens then? An environment in which each city regulates its own taxi industry might be replaced by a future in which one company has a dominant position in every city. That will entail immense market power. Eventually, Uber's investors will want a return on the billions they've invested, and that will require profits. Either prices will have to come up, or driver fees will have to go down, or both.

In 1911, the Supreme Court found Standard Oil guilty of violating the Sherman Antitrust Act, and ordered the company broken up. To this day, economists still argue whether it was the right decision. But one does wonder: Would the current Supreme Court ever rule that a company was abusing its monopoly position to unreasonably restrain trade? It doesn't seem likely. If China was engaging in similar tactics, Congress would be screaming for retaliation. But Silicon Valley gets a free pass.

We're witnessing a grand experiment: Access to venture capital enables a company like Uber to wage a massive price war in order to grab dominant market share. But there are no constraints in place to limit the damage that might be inflicted afterward. Municipalities may try to ban ride-sharing in the short term, but at the highest levels, neither our political nor our judicial system seems at all inclined to say enough is enough. Teddy Roosevelt -- the original trust-buster -- is nowhere in sight.

Maybe John D. Rockefeller isn't smiling, after all. Maybe he's gritting his teeth, as he realizes that there's never been a better time to be a robber baron than right now.