Why is Marge Simpson a sex symbol? 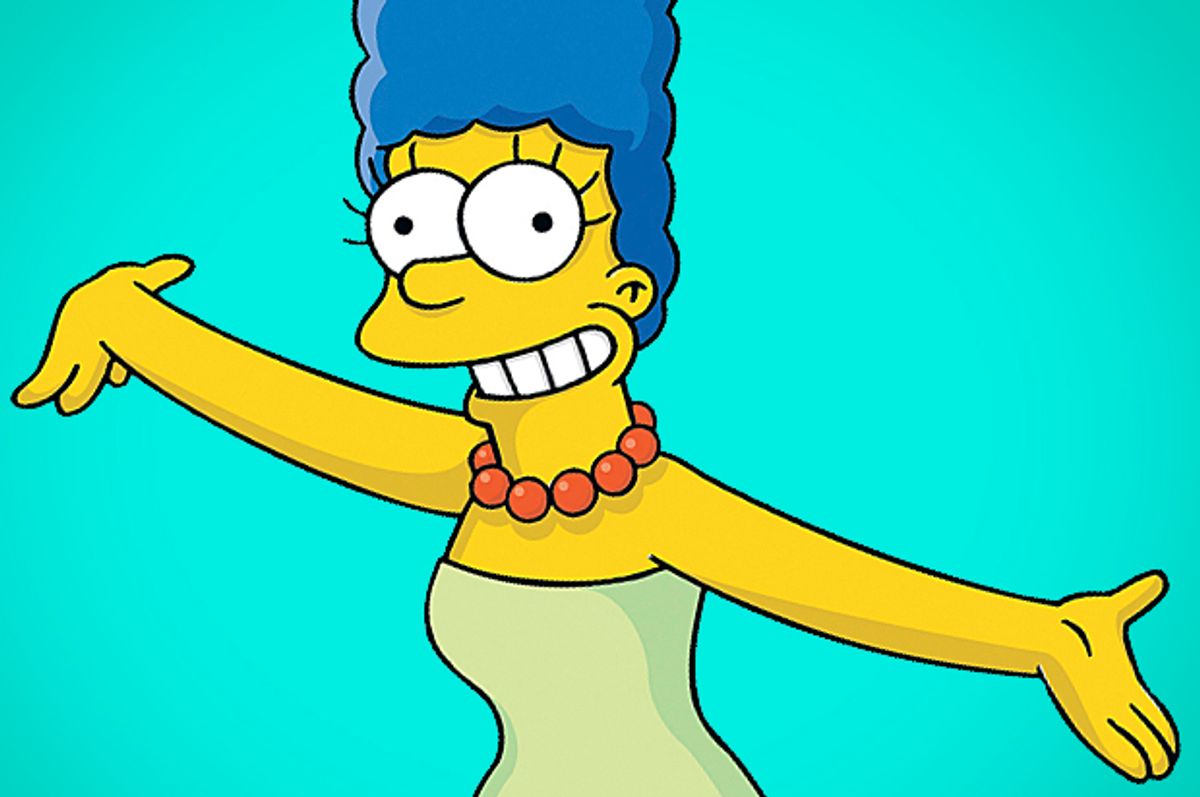 "Simpsons" superfans can get one more piece of branded merchandise to join their chess sets and Krusty dolls at this year's San Diego Comic-Con; makeup line MAC is introducing a Marge Simpson capsule collection, including eyeshadow, lip gloss and fake lashes. It's a fairly strange tie-in -- Marge herself is depicted as going through life fairly fresh-faced, and is also a cartoon with far-from-aspirational yellow skin and blue hair. It'd be hard to imagine anyone wanting to get the Marge look in its specifics.

But, oddly enough, Marge Simpson has lately come to represent in the popular culture a generic idea of sexiness and beauty. Simpson "posed" for Playboy in 2009, with a spread including semi-creepy (and NSFW) photos of the Springfield matriarch in thigh-high stockings and a see-through négligée. She holds out a plate of doughnuts for the photographer. On a slightly more tasteful note, Marge was the standout in a 2009 Harper's Bazaar spread that placed her in Versace, Chanel and Gaultier creations. A popular YouTube makeup artist recently transformed herself into Marge, complete with jaundice-y yellow skin.

"The Simpsons" is in some way a victim of its own success, and Marge's public image outside the show is proof. New episodes of the show are still popular, particularly among teen boys, but even with contemporary references they just don't feel like the present day. The show George H. W. Bush decried in the 1992 presidential campaign now depicts a family that's unusually close and functional by our standards, and Marge Simpson -- who has never worked outside the home for more than an episode and who goes through life in a strapless dress, pearls and perfect beehive -- is practically an emissary from another planet.

No wonder that, yellow skin aside, she's so aspirational. It's not looking like something Marge Simpson makeup-buyers or Harper's Bazaar readers want to do -- it's the life of the archetypal housewife. Marge Simpson may get annoyed with Homer when he acts dumb, but there's really nothing bad about her life. Indeed, she likes completely subsuming her personality to Homer's (a trait made explicit in the yikes-inducing Playboy picture of a near-nude Marge offering up doughnuts and beer). Any financial crisis or familial discord is always fulfilled within 22 minutes, and neither her pearls nor her hairdo are ever out-of-place. The most surprising thing about the marketing of Marge Simpson as lifestyle brand is that there isn't more of it.