Visit the border, Mr. President: The real reason it's the right thing to do

Yes it’s risky, but it would illustrate the complexity of the humanitarian and immigration crisis like nothing else 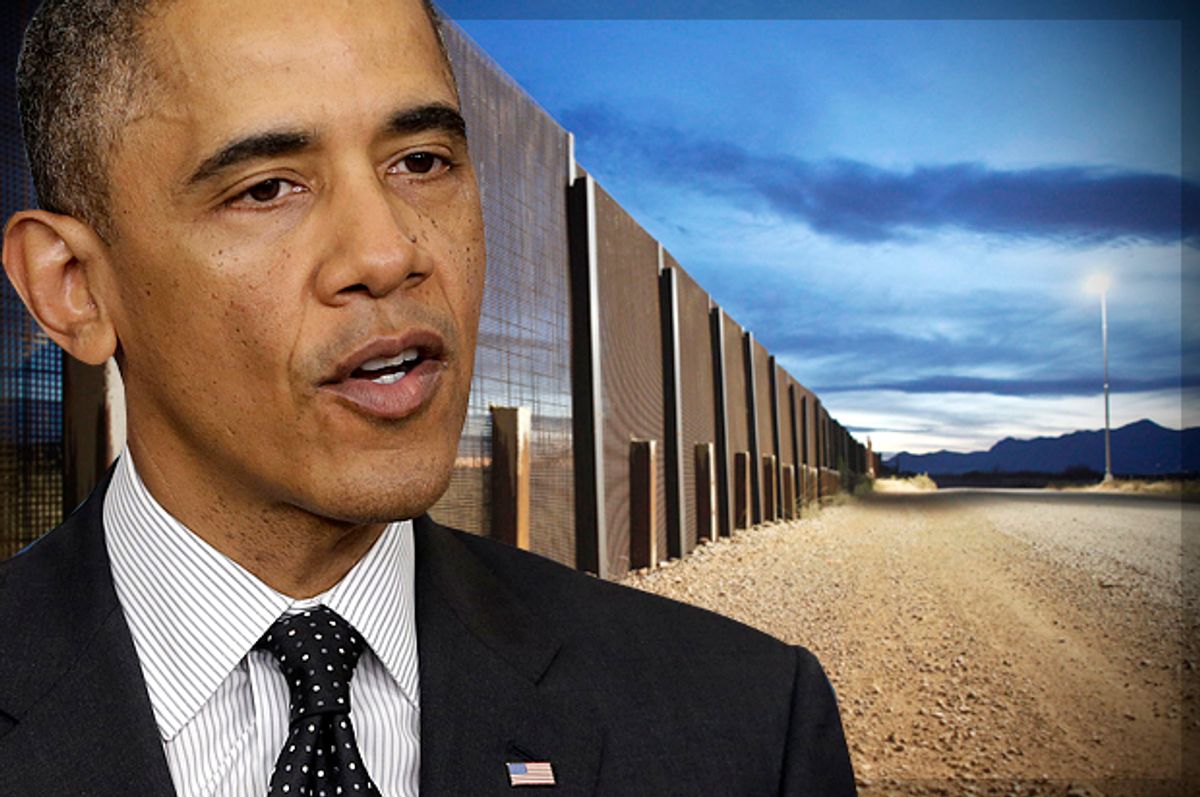 Journalists’ complaints about “optics,” which always come with advice to politicians to make the most risky and cinematically dramatic move, are the lazy way for the media to criticize our leaders when a satisfying and just solution to a vexing problem eludes everyone. For the record, the problem with President Bush’s handling of Hurricane Katrina had little or nothing to do with the “optics” of a photo showing him viewing New Orleans from the comfort of Air Force One. When he finally caved to the “optics” chorus and visited the city, he rewarded the media by crowing “Heckuva job, Brownie” at his incompetent FEMA director Michael Brown.

But neither thing really mattered; what doomed Bush was that he botched the Katrina response from start to finish.

So I rarely side with the MSM pack when it’s braying for President Obama to pay attention to “optics” – in this case, by visiting the Mexican border while he’s in Texas, to see firsthand the humanitarian and immigration crisis amassing there. This time, however, I do. But it’s not just journalists making the case: Some Democratic Congress members think he should visit, acknowledging the political risk of such a move. Rep. Henry Cuellar went too far when he told Fox's Megyn Kelly that not visiting could make this crisis “Obama’s Katrina.” But Rep. Donna Edwards, while sympathizing with the administration’s rationale, nonetheless tells USA Today: “I’d advise him to go to the border.”

It certainly would be risky. There are no good “optics.” Photos of the president surrounded by undocumented children could further convince Latinos and the liberal Democratic base that what’s required is a purely humanitarian solution to a refugee crisis. Conversely, unless the cameras captured the president personally packing kids onto buses out of the U.S., the scene would further inflame a xenophobic GOP base that imagines Obama mailed a hand-engraved invitation to each child, with his moves to scale back deportations of children who came to this country as young children. Likewise, any tough-guy photos with law enforcement could anger his base while garnering no goodwill from Republicans, because there’s no goodwill to be had.

Typically, Republicans are using the crisis as an excuse to bash the president and get themselves off the hook for blocking comprehensive immigration reform. They now want to repeal the asylum legislation that they passed under President Bush, which is the real motor powering the flow of undocumented minors to the country, and giving them the legal right to stay here while their cases are sorted out. Sen. John McCain also wants to block aid to the Central American countries whose residents are streaming to the border, as though that will do anything but worsen the poverty and crime that is powering the surge.

And while Republicans claim immediate deportation is a tough love solution that will stem the flow of illegal immigrants, as usual their ideas are tough without much love. Right now, Republicans are promising to block the $3.7 million that Obama is requesting to expedite the return of undocumented minors that they themselves are demanding. When it comes to the children amassed in squalor on the border, Sen. Tom Coburn supports nothing but first-class treatment. As in “give them a first class [airplane] seat back to their home,” he told MSNBC’s Chuck Todd. And Coburn is routinely described as one of the “reasonable” Republicans.

The very difficulty of managing the “optics” of a presidential visit is why a visit makes sense. It would humanize the complexity of the issue, in a way the president needs to do. His likely solutions will involve something to tick off virtually everyone. More funding plus administrative changes to allow courts to process undocumented minors and their parents more quickly, as the president has proposed, isn’t going over well with Republicans, while immigrant advocates worry such moves will short-shrift legitimate asylum cases.

Still, humanely and personally grappling with the crisis on the border might earn him points with allies who are otherwise concerned that Obama plans to beef up enforcement and ultimately return most of these children to their home countries. It might also convince undecided Americans that the crisis is more complicated than Republicans claim it is. Officials with the U.N. High Commissioner on Human Rights are asking that the children be declared “refugees” eligible for asylum because they’re often fleeing armed violence at home. This issue is not going away quickly.

I can imagine Obama’s advisers squirming at the thought of the president besieged by desperate children and parents, or flanked by tough-looking Border Control agents, or heckled by border town residents fed up with the crisis. I can also imagine the president rising to the occasion and making it clear, by his presence, that he’s going to look at the issue in its full and painful complexity and do the right thing.