Republican leaders say impeachment isn't worth it since it would die in the Senate. Here's their new civics lesson 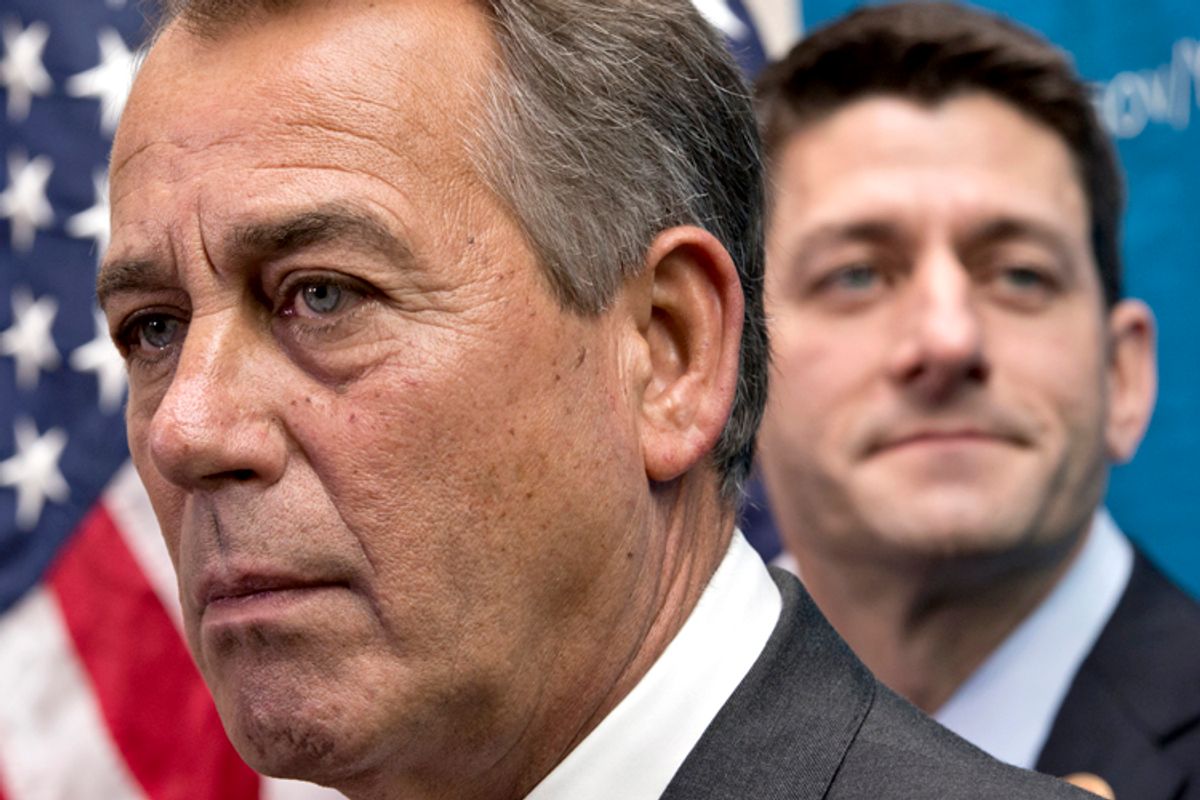 Thanks to the heroic stance taken earlier this week by Sarah Palin, impeachment chatter is in the air, and every Republican's got to answer for it. Surely Palin's fellow conservatives in the House of Representatives are grateful to her for giving them the opportunity to dodge reporters' questions on this most summery of questions.

So is it gonna happen, or is it gonna happen? It's not gonna happen, is the thing. John Boehner has ruled it out (so far). And that's a true shame. Can the republic endure even another hour of rule from the Imperial President who uses the Constitution as toilet paper? If the Obama administration can't take a breath of oxygen without violating some crucial clause, it doesn't make much sense for the Republican House of Representatives to sit on their fannies and allow this tyranny to endure.

It's not just orange Ohio RINOs like Boehner that are tut-tutting calls for impeachment. The Hill reports that even "staunch House conservatives are quashing calls for President Obama’s impeachment," arguing that "an impeachment trial would be a doomed effort in a Democratic Senate that could hurt Republicans in the midterm elections."

“Harry Reid’s going to block anything we do in that regard,” said Rep. Paul Broun (R-Ga.), a dyed-in-the-wool conservative who in February said he would vote to impeach Obama.

“We’d like to do more, the problem is the avenues are just not available,” said Rep. John Fleming (R-La.). “Even if impeachment was to pass in the House, it wouldn’t remove the president from office.

“It’s one of those things that if you can’t see an end solution, why even get into that debate?” Fleming said. [...]

“If somebody were to file impeachment proceedings — well, the fact is we know that’s going nowhere in the Senate,” [Rep. Charles Boustany] said. “And it’s going to be a major, major distraction from actually getting results, which means rolling back some of his power relative to Congress.”

All of this is correct. Impeachment in the House wouldn't lead to a conviction in the Senate. It would be a "major, major distraction" that would backfire on Republicans when they least need another self-imposed catastrophe.

It's fascinating, though, to see the House Republican majority that came into power in 2011 use "it wouldn't go anywhere in the Senate" or "Harry Reid would just block it" or, more broadly, "there's no point, it's a waste of time," as a justification for not taking an insane course of action.

In the summer of 2011, there was no chance that a debt ceiling agreement that included a "cut, cap and balance" amendment to the Constitution and all sorts of other partisan goodies would go through the Senate or be signed by the president. And yet, until the very last minute, with an arbitrary global market collapse looming over their heads, House members refused to eliminate these items from their debt ceiling demands. "This wouldn't go anywhere in the Senate" was a sellout's excuse for not trying, even if "trying" meant putting the country through months of unnecessary stress, fear and embarrassment.

This doesn't count the hundreds of other bills (40+ just to repeal the ACA) that the House has spent time passing knowing that they would have no chance in the Senate. If anything has defined the House of Representatives in the Tea Party era, it has been passing bills that have no chance of passing or being called up in the Senate. "Harry Reid’s going to block anything we do in that regard" has rarely come into the House GOP's calculus for choosing to spend time on one thing or another.

So why are they all of a sudden deferring to this excuse when the topic is impeachment? Because they know they've got nothing. If there really was a president who'd committed glaringly impeachable offenses, getting a Senate trial and conviction wouldn't be a problem. It was this sort of clear impeachment threat that finally forced Richard Nixon's hand into resignation. The rhetoric about the Obama administration's illegal actions -- at least in terms of what they're complaining about, instead of, say, NSA spying programs -- doesn't match up with the reality. So, no, prosecution of a bluff would not go anywhere in the Senate.