Jenny Lewis: Being a woman can be frustrating

The singer-songwriter on her new album, insomnia and why she doesn't think about her fans when she writes 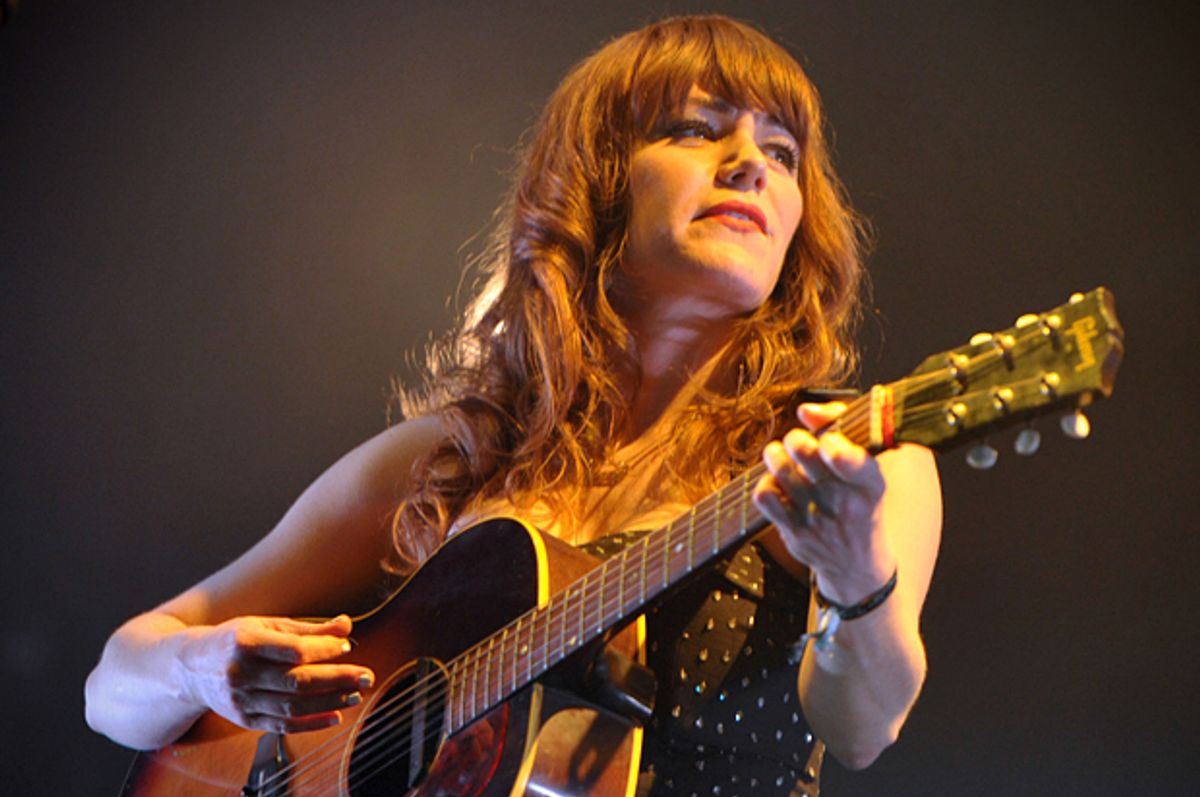 Jenny Lewis doesn’t do anything halfway. As a kid, this meant throwing herself into a successful 20-year career as a Hollywood actress (see “Troop Beverly Hills,” “Foxfire” and that Jell-O commercial). Later she switched gears, launching the beloved indie-rock band Rilo Kiley (which led one critic to dub her "the Emmylou Harris of the Silverlake set") and moonlighting with the Postal Service in 2003. Then -- and still -- it equaled committing to one fashion uniform for an entire tour because, duh, the look so perfectly encapsulated the theme of the songs (it was all hot-pants, all the time when supporting Rilo Kiley’s "Under the Blacklight").

In recent years, Lewis has built her thriving music career on smart songwriting, strong vocals and passion – heaps and heaps of passion. She’s all in or nothing, and thankfully, she’s now all in ... again. It’s been six years since Lewis’ last solo record, but she’s returned with "The Voyager," out on July 29. Ryan Adams and  partner Mike Viola did most of the production at Pax Am, Adams’ California analog studio. Beck helped, as did Lewis’ longtime boyfriend Johnathan Rice (who is also one-half of their folksy indie duo Jenny & Johnny).

"The Voyager’s" songs are alternately poppy and lilting and energetic and sad – most didn’t come from a happy place. Lewis has described the record as a product of one of the hardest times in her life -- her estranged father died in 2010, and Rilo Kiley dissolved the following year. As a result, she found herself beset by doubt, regret and a years-long bout of insomnia due to a mind that wouldn’t, or couldn't, shut off.

What differences might fans notice between this album and your past work?

I can’t imagine how people will react to my music. For me, it’s a really fluid process from one record to the next, but it’s really up to the listener.

Are you still playing with Jenny & Johnny, or is that on hold?

Well, we are always writing together. Jenny & Johnny (which I’ve never referred to like that before: "Jenny and Johnny are always writing music together"!) collaborate on various projects. And Johnathan and I actually co-wrote two of the songs on "The Voyager" together. It’s a little factory over here …

Are you generally always writing something, or do you go through quieter periods, when nothing comes to you?

My work ethic is different from Johnathan’s. I try to work every day, but I also work [more] within that moment of inspiration. He’s much better at doing homework. So I’ll always have, like, 10 ideas lying around, and he’ll get down to brass tacks and finish ideas. We pick up each other’s slack in that way.

Well, the record doesn’t represent only that feeling. And I wrote the songs over an extended period, so there’s a lot of joy in there as well.

I think art doesn’t have to be created in a period of misery, but it certainly helps. You know? Trying to write positive songs -- like “All right, sit down and write a Bob Marley song like ‘One Love’” -- for some reason that is harder for me to tap into than the other [darker] stuff.

I know, but it’s funny when you think of living your life like that. I wouldn’t want to be miserable just to make something. You’ve just got to find the balance, and hopefully use the darkness in your work to get over it.

What’s the biggest difference you’ve experienced when it comes to the realities of being a woman in a band versus being a solo female artist?

Being in a band is a really magical thing, because you’ve got a family and you operate as this one entity. It’s very democratic; everyone is involved in the output. But within that, there can be a lot of disagreements and strife. As a solo artist, at the end of the day, if people like my record or don’t like it, it’s on me. But it’s my vision -- it sounds so pretentious, "It’s my artistic vision" -- but it really is. So there are positives and negatives, but at this point in my life, I want to present something that’s wholly mine.

Were you nervous about going out on your own?

I’m always pretty nervous when I do anything! I walk very slowly. I’m very careful. But for me it was a natural transition, because my first solo record was recorded when my band was still together, so it felt like I was moonlighting or cheating on my band a little. The stakes were really low ... I perform better when the stakes are low, at smaller concerts, when there’s not so much [riding] on it.

You went out on the Postal Service’s big reunion tour last year. Was it nerve-racking at all?

That had no bearing on my own music. I was in [the Postal Service] 10 years ago; it was a privilege to play Ben [Gibbard] and Jimmy [Tamborello]’s songs 10 years ago, and it was even more amazing last year! It was something that I never thought was going to happen. Those were the biggest shows I’ve ever played in my life, and Ben and Jimmy are two of my best friends, so it was a pretty happy [event].

What’s the difference between playing in a huge arena environment vs. a smaller club environment?

There’s a certain anonymity in a bigger environment. With the Postal Service, we had the full production -- lights, costumes, a massive crew. You don’t have to work as hard, because the production is doing a little bit of the work for you. But when I play my own shows, I don’t have any lights or anything, so I’m up there busting my ass ... When you allow yourself to have a little production value, it adds to the entertainment factor. It kind of felt, with the Postal Service [reunion shows], like we were at Universal Studios or something. It was so big.

Is there anything frustrating, obnoxious or just difficult that you’ve experienced as a female artist?

Being a woman -- just in life -- can be frustrating at times ... But I never really thought of it like that. My goal was always to write the best songs I could possibly write. Not to be considered a "female songwriter" -- I’m just a songwriter. I hope my songs can exist next to good songs across the board.

Certainly there are details of being a woman on the road that can be difficult, but ultimately [it’s] totally worth it. And I’ve tried, in my solo work, to incorporate as many women as possible, so I’m always traveling with women, which only makes my life better.

I read that severe insomnia fueled the songs on "The Voyager" -- is that something you’ve always struggled with, or was it only during that time in your life?

No, I’d always been a great sleeper. I remember being a little kid and falling asleep at Denny’s, [in] the booth. So when [insomnia] struck me, it was pretty shocking. It was very sudden. One day I couldn’t sleep. I had to take a moment to look around, take an inventory of my life and look at why I wasn’t sleeping. It’s a very complex issue, you know? Is it emotional, psychological? I’d reached some kind of crossroad.

It was definitely a moment in my life that seemed to last forever.

No, a couple of years! It was terrible. I expected it to resolve itself quickly. When you [try to] exert control over your life, you’re like, "I want this better, now!" and it’s just not what happened.

What helped you through it?

I did everything. I tried hypnosis, acupuncture, neurofeedback. In the end, I think exercise helped most. Every day I was hiking miles and miles, doing yoga, doing cardio, just whatever I could do to exhaust my body. But then at the end of the night, my mind was still alert. In those moments that I was lying awake, I focused on my lyrics. I used that time to comb through every word and iron things out. The Postal Service tour came about halfway through [that period], which also allowed me to get out of my own head and focus on my work.

But I’m sleeping well again! [I’m] superstitious, and I hate to even say that because I’m afraid.

If you had to narrow down the core themes on "The Voyager," what would they be? You know, like love, loss ...

Certainly both of those! Sex. Regret. Acceptance. And joy -- I knew I’d get one positive one in there.

Do you think the media or the public in general have any misconceptions about you or your work?

I try not to pay too close attention to that stuff. Because like the first question you asked, it’s not my job to tell audiences how to perceive me. All I know is that I write songs and I’ve never written out of any desire to be someone else. I’ve always written from a very real place, even if it’s based on a character. It’s the nature of being in the public eye; it ebbs and flows, people are with you, and then not with you. I can’t really worry about that.

What were you listening to, reading and watching while you made this record -- are there any specific artistic influences that played a role in it?

I was watching three things on my iPad: "Downton Abbey," "Cosmos" (the Carl Sagan show) and boxing. And the three things are so different that they kept me distracted, in a way. Also I was listening to a lot of Bonnie Raitt, who I absolutely love, and I read Keith Richards’ autobiography,"Life." I read it, and then I listened to it. That really kept me going. If Keith is still kicking, then certainly I [should be able to] get back to sleep!