Rove criticizes Obama for fundraising during crises -- just like George W. Bush did 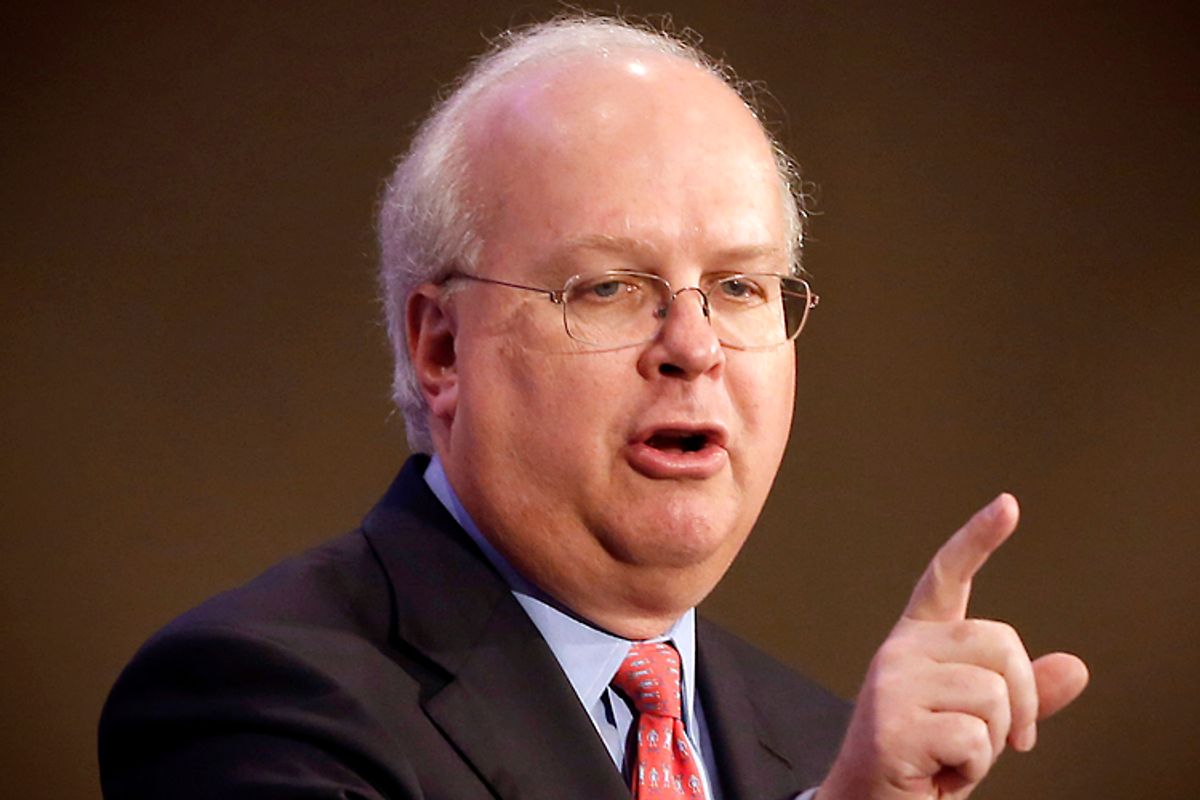 It’s been fun watching Karl Rove’s political persona slowly degrade over the years. He’s gone from being a Machiavellian master strategist who terrified liberals as he ushered in an era of Republican political dominance, to a clown with a whiteboard who bleated futilely on Fox News that Ohio had not slipped out of Mitt Romney’s grasp.

In keeping with this slow skid towards buffoonery, Rove wrote a column for the Wall Street Journal this morning attacking President Obama for attending fundraisers during moments of international crisis. “His timing and his lack of judgment” are terrible, Rove argues, dinging the president for heading off to raise funds in the immediate aftermaths of the Benghazi attacks, the Russian invasion of Crimea, and the assault on Mosul by the terrorist group ISIS. “He makes time for [fundraising] no matter how pressing world or national affairs are,” Rove writes.

Let’s grant Rove’s premise and say yes: the president of the United States should not be jetting off to fundraisers while the world is in chaos and people are being killed overseas. If that’s true, then he’s also just penned a withering critique of his former boss, George. W. Bush.

On March 2, 2004, suicide bombers conducted coordinated attacks on Shiite shrines in Baghdad and Karbala that coincided with the holy day of Ashura. Nearly 200 people were killed, which made it the deadliest day in Iraq since Bush had declared major combat operations over. The next evening, Bush flew out to Los Angeles for a fundraiser, where he joked about Arnold Schwarzenegger’s role in Terminator 3.

Just over a week later, on March 11, 2004, terrorists exploded bombs on commuter trains in Madrid in a coordinated attack that left nearly 200 people dead and over 1,800 wounded. That morning, Bush condemned the attacks. That evening, he flew to New York for a Bush-Cheney campaign fundraiser.

On October 2, 2006, eight U.S. soldiers were killed in Baghdad by small arms fire and roadside bombs. Another three soldiers had been killed in the previous two days. Bush spent the evening of October 2 in Nevada at a fundraiser for Dean Heller. “It's a good sign, Dean, when your friends and neighbors are willing to put a little hard-earned cash into the hat in order to help you.”

A week later, on October 9, 2006, North Korea detonated its first nuclear weapon. That morning, Bush called North Korea’s actions a “threat to international peace and security” and called on the UN Security Council to take immediate action to counter this “grave threat to the United States.” The next evening he jetted off to Macon, Georgia to headline a fundraiser for Mac Collins.

Rove was working in the White House as Bush’s senior adviser or deputy chief of staff for every single one of these fundraisers. It’s a good bet he wasn’t as concerned back then about the president showing a “lack of judgment” by attending fundraisers during moments of crisis.

Of course, the argument undergirding Rove’s premise is that the president can’t be an effective crisis manager and a politician at the same time. That’s silly on its face, but it’s enough of a hook for a hack politico on the downslide to fake a little outrage.