Hypocrisy, incompetence and cold inhumanity: Ukraine heads for its most gruesome hour

Brace yourself: Ukraine's civil war is about to turn even worse. Time to examine our policies that brought us here 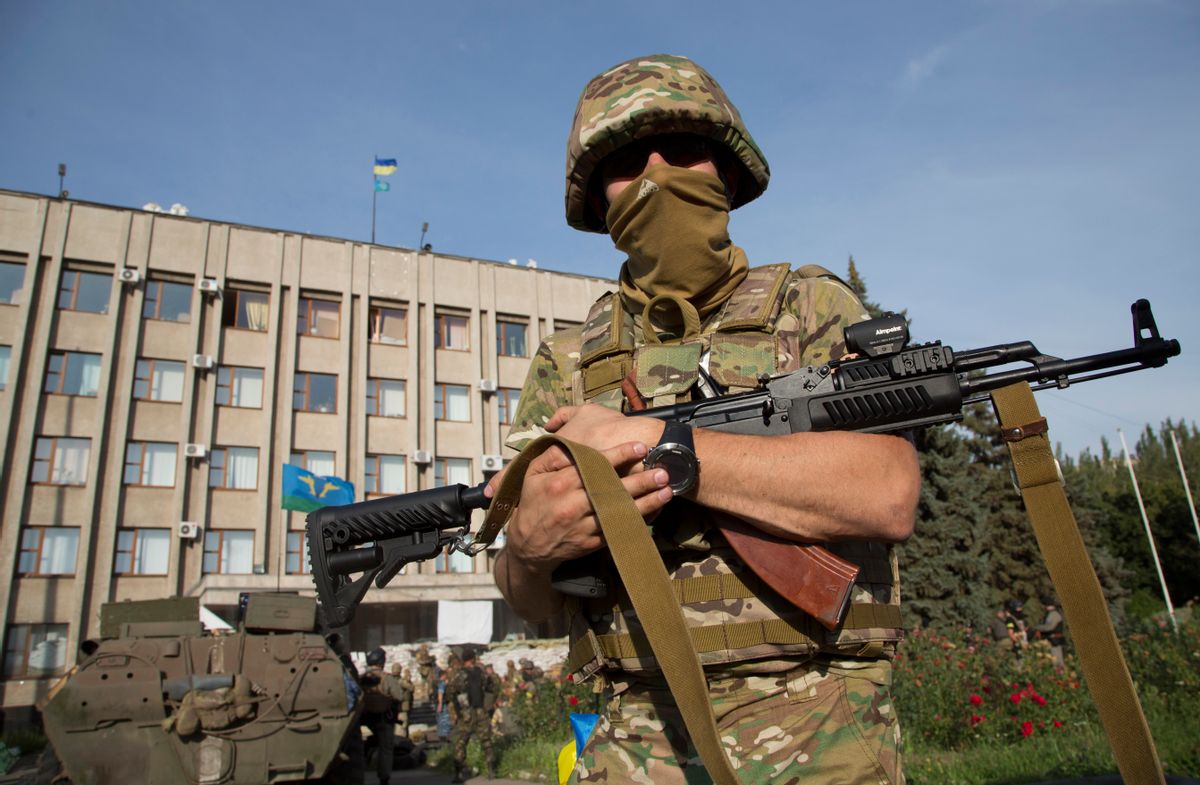 An Ukrainian government army soldier stands in front of the government building with a Ukrainian flag on the roof in the city of Slovyansk. (AP/Dmitry Lovetsky)
--

We had better brace ourselves. The civil war in Ukraine appears headed for its most gruesome hour. Those in the east of the country who resist what amounts to the crude chauvinism of the new government in Kiev may very soon remind us of fish in a barrel. The heart sickens at the hypocrisy, incompetence and cold inhumanity that have brought this crisis so unnecessarily to this.

Victor Poroshenko has been in office a matter of weeks, and it is already clear he has not an ounce of statesmanship in him. Strip away all the foggy, misleading  language — a self-help exercise, as your media are complicit in reproducing it — and the candy bar magnate now turned president displays a governing principle that comes to, “I’d rather shoot you than talk to you.”

It will be criminal if, as now appears likely, Kiev sends warplanes and troops to Luhansk and Donetsk, where anti-chauvinist rebels have retreated in anticipation of a showdown with the army Kiev has, without hesitation or conscience, turned on its own people. Know what you are watching if it comes to blood running in the streets of these two eastern cities: A minority of Ukrainians entertaining a fantastic ideal of life as part of “the West” will attempt to erase that part of its national identity it holds in contempt.

Depending on events over the very near term, it may tempt some to conclude that the Ukrainian crisis has reached its denouement. Ukraine should be so fortunate. There is no triumphing over the aspirations of others, not in the long run. Defeating the rebels in the east will simply confirm the splitting up of the country, in fact if not on maps, and fix eastern-dwellers in a poisonous state of ressentiment.

Join me, please, in refusing to let anyone get away with calling such an outcome either victory or success. Kiev will have won the battle and lost the war, in my view, given the damage the Ukrainian polity will have sustained. And if what remains counts as a successful transformation of the nation into a Western-tilted liberal democracy, well, the rest of this sentence is not printable in a wholesome  publication such as Salon.

Poroshenko, Prime Minister Arsenyi Yatsenyuk and their colleagues are still not done calling the eastern rebels “terrorists” — the single most preposterous use of the term I have heard to date. This seems to foreclose the only road to success now open to Kiev, the opening of talks with rebel representatives without preconditions. So it is time to talk about failure in Ukraine, and to consider just whose it is.

It will belong, first, to those in western Ukraine determined to marginalize their eastern compatriots in the name of the impossible European dream. They will get a dose of International Monetary Fund conditionality that will be less overtly violent than the civil war but freighted with misery in its own right. And they will get their very own version of the democracies in name only that are coming to force upon us Westerners a stark choice between bitter acquiescence and resistance.

On a visit to Slovyansk the other day, Interior Minister Arsen Avakov was asked, “What kind of future is there for Ukraine?” According to the New York Times account, Avakov replied with a smile, “A beautiful one.”

I am not at all surprised. Kiev will get away with selling this bill of goods for a while longer — until the products actually on offer arrive, to be precise.

But given the Ukraine crisis was never truly about Ukrainians, the larger failure will belong to the Americans. It was our State Department and intelligence people who took a large, probably decisive role in shaping the events that now come to civil war. There is no way under the sun to call this a desired outcome. Washington wanted to yank Ukraine westward in its ongoing enmity with Russia, but it is another case of destroying the village to save it, if you see what I mean.

I have remarked previously in this space on the historical aspects of American responsibility. There has been no break in the pattern straight up to the present, it is important to note now.

First of all, there is the on-the-record part. Remember those visits CIA Director John Brennan and Vice President Biden paid to Kiev in the early spring? It is plain enough now what those conversations concerned. Washington has sent Kiev $23 million in “security assistance,” as a June 4 fact sheet from the White House puts it, since March. Military equipment just shy of weapons is the cleaner phrase. When Kiev’s troops  began the civil war against eastern rebels in April, they were wearing American-issue goggles, helmets and other “non-lethal individual tactical gear.” (I simply cannot resist a good American euphemism.)

So we equipped the coup-makers, which is against U.S. law, while pretending to a detached desire for an equitable settlement. This stuff is not lost on the Russians, or the Europeans — only on we Americans.

Now onto other dimensions of the campaign.

Here and elsewhere, I have noted over the past couple of months the “silent sanctions” Washington has imposed by exerting off-the-books influence among lenders and investors. These have been effective, if little noted in our news columns. Russia has been more or less frozen out of the international bond markets since the spring, for instance. Now this report by John Hellmer, published in Business Insider a few weeks ago. It requires only a slight change in vocabulary:

“In the New York and London markets, brokers and bankers explain that they are being discreetly called by U.S. Treasury officials with this message: Buying Russian equity or debt paper is legal, but in the event there is a new round of sanctions, it will be illegal to re-sell them, so there can be no profit in Russian assets. The market is calling this campaign ‘stealth sanctions.’ It is an attack on the international market for Russian corporations, and on the international currency and security clearance systems on which the market depends.”

Paraphrase: Washington cannot get the Europeans persuasively onboard for more sanctions, given they will suffer most from the consequences and the U.S. not at all, so Treasury will get it done another way.

This is a miserable business, not only with regard to Russia, but toward the Europeans, too. Even now, after the European Union announced that is sees no further need for another round of sanctions, Washington continues to prepare them.

Recall the infamous “‘F’ the EU” tape recorded in March and identified as the voice of Victoria Nuland, President Obama’s assistant secretary for European affairs. Several months on, it appears to be precisely what Washington is doing.

There is worse of late. Last week France and Germany joined Russia in calling on Kiev to open talks with the eastern rebels. Sergei Lavrov, the Russian foreign minister, said more recently that Poroshenko’s insistence that anti-Kiev insurgents lay down arms and surrender before talks can open  “kills any opportunity for reconciliation.”

This appears to be precisely Poroshenko’s intent, of course. The day after he refused European requests to extend a cease-fire that, once again, the EU and Russia had supported, I had this from an exceptionally well-placed source in Parisian political and diplomatic circles:

A few days after this note arrived in my inbox, Kiev announced, with unmistakable new vigor, the revived “anti-terrorist operation” we are about to witness. The promising thing, the New York Times tells us in a remarkable piece, is that the soldiers in the Ukraine army “have surmounted a reluctance to open fire on their own countrymen.”

It is simply the very best news. And this, when it is over, we will be invited to look upon as Washington’s success in helping the people of Ukraine realize their democratic aspirations. Victoria Nuland and those for whom she runs errands will celebrate the installation of a government of stooges on Russia’s border, but this kind of thing never turns out well, as any student of history knows.

One more point in closing. Does anyone have any more time left for the incessant propaganda leveled at Vladimir Putin as the pernicious instigator of the Ukraine crisis? I never have and certainly will not make any now. Since distancing Moscow from the referendums held in eastern Ukraine is May, Putin has consistently called for an end to hostilities and a negotiated solution.

After the elections in May, he accepted Poroshenko and the rest of the new leadership. (This, to be honest, surprised me.) Now he has so far declined to come to the aid of the rebels as they retreat and, indeed, to intervene on behalf of those in eastern Ukraine who can be identified as deserving of Russian protection.

I am with my Parisian source: We are going to have a real mess on our hands. Let there be no doubt as to its authorship.