Republican turns on party, blows up its crock of nonsense 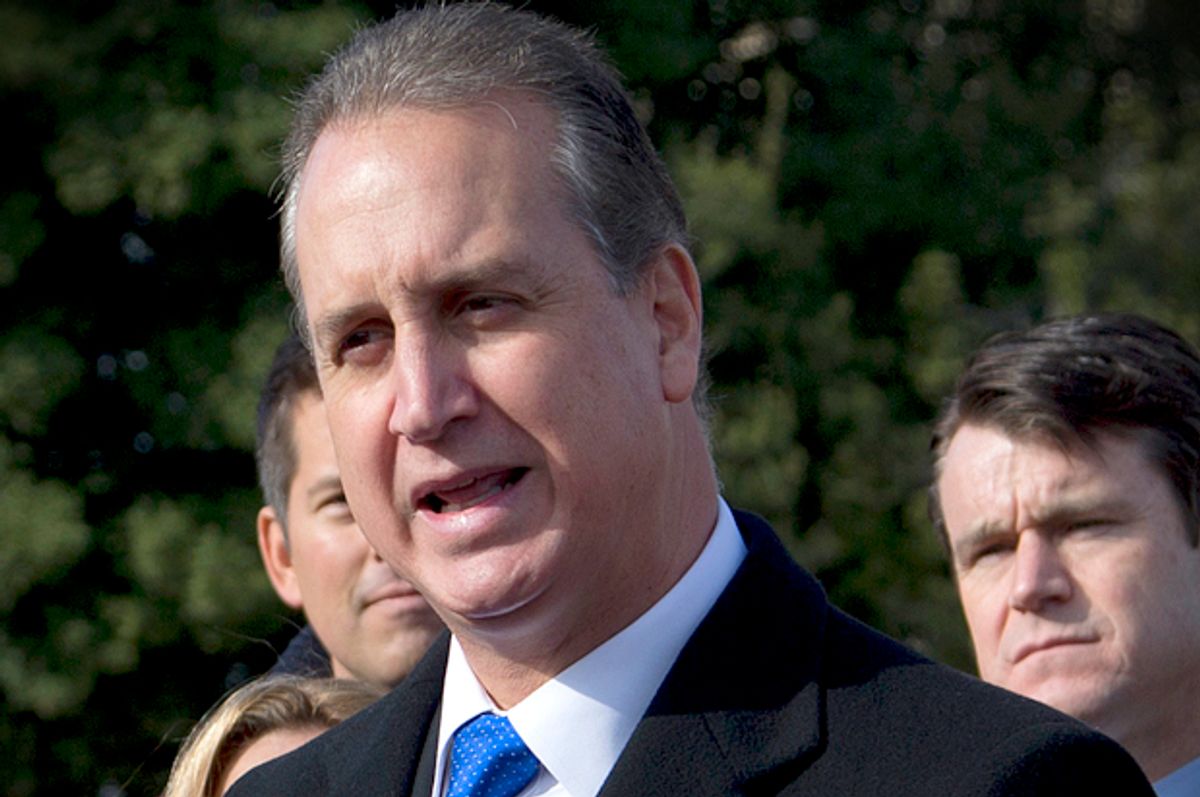 It’s been painfully obvious for months now that the reason offered by House Republicans for why they couldn’t move forward on immigration reform was a crock of nonsense. When asked about the possibility of reforming the immigration system, Speaker John Boehner and the rest of the leadership would mournfully shake their heads and say they’d love to get something done, but they just couldn’t trust President Obama to enforce whatever law they passed. Until that key element of trust could be restored, they said, no legislation would leave the House.

Everyone knew that was a load of crap; the reason Republicans wouldn’t move forward on immigration was that the caucus was terrified of the political blowback from conservatives, and not willing to hand the president a huge legislative victory. Those two obstacles couldn’t be overcome, and the Senate’s immigration reform bill, passed last summer with bipartisan support, slowly died.

The death of that bill has resulted, predictably, in everyone blaming the other side for the failure to get reform done. But yesterday Rep. Mario Diaz-Balart, one of the GOP’s chief proponents for immigration reform, came out and blew some holes in the Republicans’ attempts to deflect blame and said plainly what needs to be said: Republicans killed immigration reform.

Diaz-Balart has been quietly working to cobble together his own reform bill and muster support for it. After Boehner told Obama two weeks ago that no votes on immigration would be held this year, Diaz-Balart made one last plea to the House leadership, and they gave him the same answer: no vote. So he held a press conference yesterday to discuss the “disappointing and highly unfortunate” turn of events, and let fly with some real talk:

It is highly irresponsible not to deal with the issue.  I know it is difficult, especially when you have a President that failed to build the trust of the American people or the U.S. Congress, and who has done little to enforce current law despite his assertions to the contrary. But we were sent here by the American people precisely to tackle difficult issues and not to take the easy way out.

It’s an interesting statement, in that he gives the GOP’s reason for inaction (mistrust of the president) the due credit you’d expect a Republican to give it, but then says it doesn’t matter because legislators are expected to, you know, legislate.

But what of this argument that Republicans just couldn’t trust Obama enough to pass a bill? According to Diaz-Balart, that’s not necessarily true. “I feel absolutely confident that we had the majority — of the majority — of support from the House Republican Conference,” for his bill, he told reporters. Diaz-Balart could just be blowing smoke on this point; the bill won’t get a vote anyway, so he’s free to invent whatever level of support he wants. Either way, whatever backing was there got wiped out by “multiple unexpected events — most recently the primary defeat of Majority Leader Eric Cantor, R-Va., and the uproar over the child migrant surge at the southwest border,” according to Roll Call.

Diaz-Balart also made a point that Republicans are loath to concede: The migrant crisis at the border is not a reason to shelve reform, but a reason to pass it as soon as possible. “This system is not going to fix itself, and delaying a commonsense solution is only going to make matters worse as is evident by what is going on today with the crisis on the southern border.”

There’s one more point here that needs to be emphasized, and that’s how Diaz-Balart’s remarks yesterday were a rebuke of the rationale behind John Boehner’s plan to sue the president for his alleged abuses of executive power. Boehner has been claiming that going to the courts is the only way for the legislature to protect its power from encroachments made by the executive branch. “The House must act as an institution to defend the constitutional principles at stake and to protect our system of government and our economy from continued executive abuse,” he wrote in a June 25 memo.

Diaz-Balart shares the Republican disdain for Obama’s use of his executive authority, but on immigration at least, he said the best way to prevent the president from overreaching and to act in the country’s best interest was to actually do the job of the legislature and pass laws.

By blocking reform, whether it was when Nancy Pelosi was Speaker or now, we are in effect abdicating our duty.  Particularly when we have a President that is willing to unilaterally act through executive action, that he himself has said is legally circumspect, will not provide a long-term solution to our immigration system, and I believe could even make it worse.

This isn’t a novel theory – it’s how government is supposed to work. And it makes it kind of difficult for Boehner to argue that he has no power to fight back against an overreaching, imperial president when members of his own caucus are saying he has the power and the responsibility, but chose to give up both.