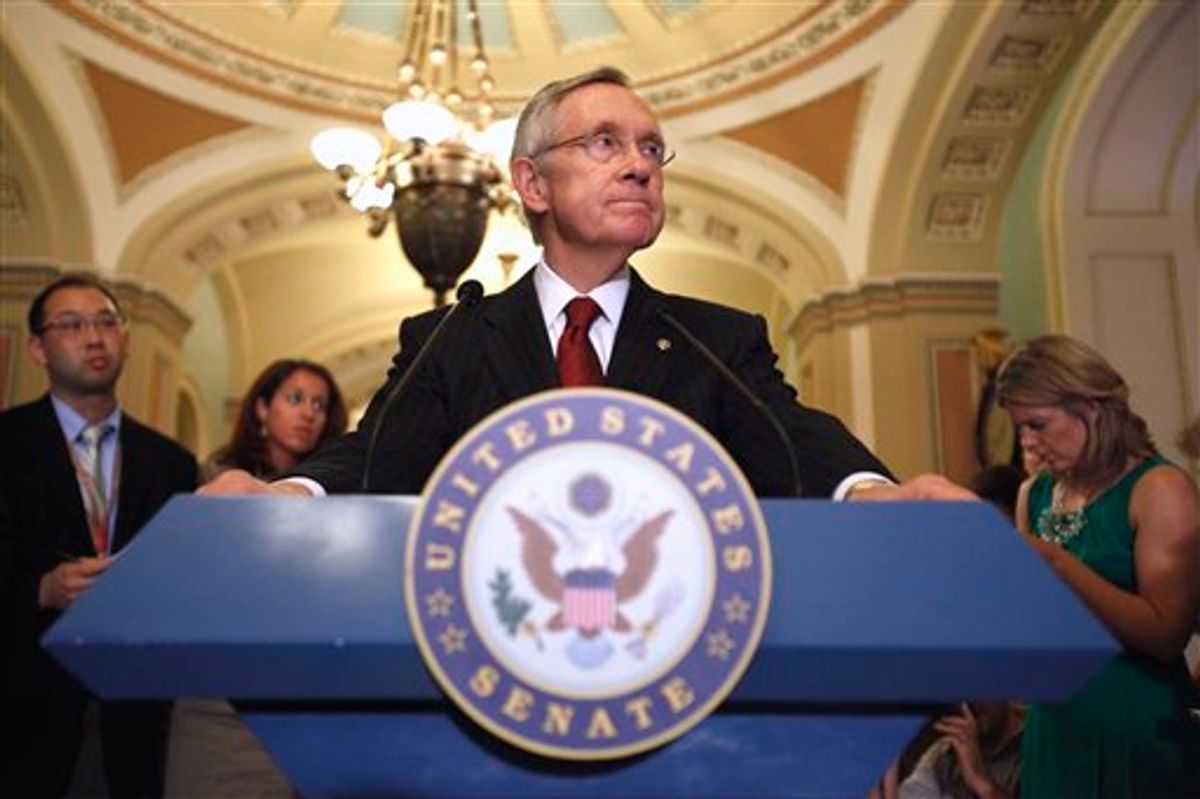 If the Democrats control the Senate after November, Majority Leader Harry Reid might want to send thank you notes to a bunch of relatively unknown Libertarians, who, with little money and a big dependence on free YouTube videos and Facebook posts, are undercutting mainstream Republican candidates in seven states.

The Washington Post says the upstarts—Sean Haugh, Roger Roots, John Buckley, Robert Sarvis, Thom Walker, Nathan LaFrance, and Mark Fish or Dave Patterson—are attracting needed Republican votes. Who are they? A few are a bit nutty, but also appealing in perverse political ways. One is beyond creepy and should crawl back under the snake-infested rock where he came. The rest spew the party’s well-known anti-government lines. Let’s take a closer look, starting with the most intriguing.

1. North Carolina’s Sean Haugh. Is he really a pizza delivery man running a campaign based entirely on YouTube videos? He seems to be exactly that, drinking a different craft beer as he delivers his folksy bromides from a basement bar stool. The WaPo said that he has raised $4,000, a fraction of one bitcoin, and recent polls give Haugh 8-to-11 percent of the vote. That showing boosts prospects for the Democratic incumbent, Sen. Kay Hagan, against her GOP rival, North Carolina House Speaker Thom Tillis.

But enough with the horse race—what about those videos? Well, they’re charming, and Haugh sounds almost sane as he lands on right-wing stances. This one, posted on July 9, is typical. Sitting next to a drained pint glass of Peacemaker beer, Haugh shares his thoughts on gun control laws:

“I’m not your typical Second Amendment absolutist. I don’t like guns. I am committed to living a non-violent life. And that includes keeping weapons out of it as much as possible. You will not bring a gun into my home or my car. I want to end violence in every aspect of our lives. Now, not having a gun is my choice. I will be happy to tell you about my choice all day and all night long…

“But as a Libertarian, I know that trying to force others to make that choice does not work. Like what? I’m going to hold a government gun to your head because guns are bad? That makes no sense.”

If a lot of politics comes down to voting for who you want to have a beer with, Haugh certainly is that candidate. In fact, if you watch enough of his videos, he begins to look somewhatbuzzed most of the time. He’s never drinking the same beer twice.

2. Montana’s Roger Roots. Now that we’ve had some fun, it’s time to be scared. In the late 1990s, Roots sued Montana Human Rights Watch for libel because they said that he was an organizer for the Klu Klux Klan in Billings. An appeals court threw out Roots’ lawsuit, but not without citing even more alarming facts about his background in a lower court’s ruling:

“[He] authored a publication entitled Whites and Blacks 100 Facts (and One Lie), which is advertised for sale nationally. The publication lists “facts” about African-Americans, such as: blacks have low I.Q.’s due to small foreheads; they have never invented anything; and they are more likely to have syphilis than whites. [Roots] is a columnist in the Jubilee, wherein one of his columns states that the Holocaust was a hoax.”

That Court ruled Roots could not sue for libel because he was a public figure. Today, he still is a public figure. The Montana Newspaper Association and Montana PBS included Roots in a statewide debate for 2014 U.S. Senate candidates. In this YouTube clip, just posted by The Billings Gazette, it took about 20 seconds for Root to show how little he’s moderated his views. Roots attacked the Democratic incumbent, Sen. John Walsh, and the Republican challenger, Rep. Steve Daines, over federal spending.

“The main focus shouldn’t be so much on earmarks, specifically, it’s on the spending: the wreckless and irresponsible spending of these two government supremacist parties. Both of these man on stage spend like drunken sailors. Some people say that that is an insult to drunken sailors, because at least drunken sailors are spending their own money.”

Did we forget to mention that Roots also is a two-time felon, including gun convictions? MtCowGirl.com predicts he’ll draw support from the state’s Tea Party voters.

3. West Virginia’s John Buckley. Compared to the Wild West, the Libertarian running in West Virginia is almost sane. John Buckley is an ex-state legislator from Virginia and has worked for a gamut of right-wing think tanks: American Conservative Union, Cato Institute, and George Mason University’s Law and Economics Center. The WaPo noted that he once made Rolling Stone’scover, holding a Ronald Reagan bumper sticker.

In announcing his candidacy, Buckley espoused a “limited governent… live and let live” philosophy for solving big problems. He then compared West Virginia to the enslaved districts in the Hunger Games books and movies, which surely will make voters back home feel good about themselves and him. Here’s what Buckley said:

“Did you ever see “The Hunger Games”? Sometimes, it seems that Washington, D.C., is the same as the “Capitol” of Panem, administering West Virginia and our sister states just like the “districts” in the Hunger Games. The seemingly benevolent dictators in Washington, D.C., think they know what’s best for us and, in regulating us so minutely, they keep us from thriving on our own. They set us against each other, all while the lobbyists in the capital city just get wealthier and wealthier at our expense.”

4. Virginia’s Robert Sarvis. Sarvis, in contrast, is probably the kind of Libertarian you would let your sister date. He’s a successful entrepreneur who believes in the free market but doesn’t go off on paranoid tangents like his partisan brethren. Of course, his reply to Obamacare is to give all the power back to insurers and hospitals, as he told Reason.com. But Sarvis sounds even-tempered, which contributed to his receiving 6.5 percent of the vote in 2013’s Virginia gubernatorial race. He’s now running against ex-RNC chairman Ed Gillespie, a quintessential party insider, and incumbent Democratic Sen. Mark Warner, an ex-governor. The WaPo says that Sarvis gets about 6 percent in current polls, including 11 percent from those very important independent voters. Their analysts said that he won’t be a "spoiler" for Gillespie, which, of course, means that the Republican establishment is worried.

5. Kentucky’s Dave Patterson. This police officer is still collecting signatures to qualify for the fall ballot, where Democrat Alison Lundergan Grimes has already pushed Senate Minority Leader Mitch McConnell into his toughest re-election contest in years. There’s little doubt that Patterson will be on the ballot, as enough Kentuckians like Libertarians. The state’s other Senator is Rand Paul, who was elected as a Republican but takes numerous Libertarian stances.

Patterson cites curious credentials for office. He’s descended from two passengers on the Mayflower, his website noted, which may mean that he thinks he knows what the country’s founders were thinking before there ever was a concept of America. He’s also won awards for making drunk driving arrests and been twice cited for bravery. Apparently, Patterson is the rare police officer concerned about government overreach, as his Facebook page noted. He recently shared a link and commented about an Oregon man who was sent to jail for collecting rainwater on his roof. He wrote:

“This is ridiculous. The only thing I can see Gary Harrington being guilty of is an outdated unnecessary law enforced by people who have no better sense than your below average village idiot. At both the local, state and federal level, governments need to review and repeal unnecessary/immoral laws.”

6. Alaska’s Mark Fish or Thom Walker.These men are competing to be the party’s Senate nominee. According to Alaska politicos, Fish, an ex-state Libertarian Party chair and campaign worker for Sarah Palin, is favored. He spent five years on Alaska’s Human Rights Commission, but did not seek reappointment after getting into trouble for blogging that “radical feminists” were out to purge the Earth of men. Fish wrote, “Yes, folks, elements of this group actually belief (sic) men have no value and through science they can eliminate men from the face of the earth.”

It’s unfortunate that he’s seen as the frontrunner, because Walker appears to be more interesting of the two. Nonetheless, pollsters say that any Libertarian could take 5 percent of the vote. That clearly would help incumbent Democrat Sen. Mark Begich.

Walker is an assistant manager at the University of Alaska’s Toolik Field station in the Arctic. The WaPo noted he “only has a web presence on Facebook, where he posts photos of kayak trips and his dog.” Alaska's current Libertarian chair told AmandaCoyne.com, “He’s not a viable candidate if he can’t answer his phone.” Actually, his Facebook page is filled with entries slamming the federal government for interfering in people’s lives. And there is a photoshopped picture of him holding a four-foot long fish.

7. Arkansas’ Nathan LaFrance. There are Libertarian Senate candidates on the ballot in other states, such as Oregon, Colorado and Minnesota. But the Senate race in Arkansas is seen as one of the 2014's closest. That makes the entrance of LaFrance, an energy manager at Wal-Mart headquarters in Bentonville, potentially significant—if he takes away votes from the Rep. Tom Cotton, the Republican challenging the Democratic incumbent, Sen. Mark Pryor.

On a YouTube video explaining his candidacy and positions, LaFrance dryly recites the typical Libertarian platform—cut, cut, cut government services and taxes. It’s hard to say how that will play with voters, but he might garner a protest vote that will dillute what Cotton would need to oust Pryor.

It’s quite a thought that some of these Libertarians might hold the partisan control of the U.S. Senate in their hands. One likes to swill his beer. Another is a textbook racist and white supremacist. Another thinks Congress works like the Hunger Games. Another is Sarah Palin’s misogynist friend. And some of the others are just old-fashioned Libertarians: pro-business, Ayn Randers, anti-government activists—even if two are currently employed by the government.