CrossFit, neuroscience, surviving the zombie apocalypse: Is your workout a fraud? 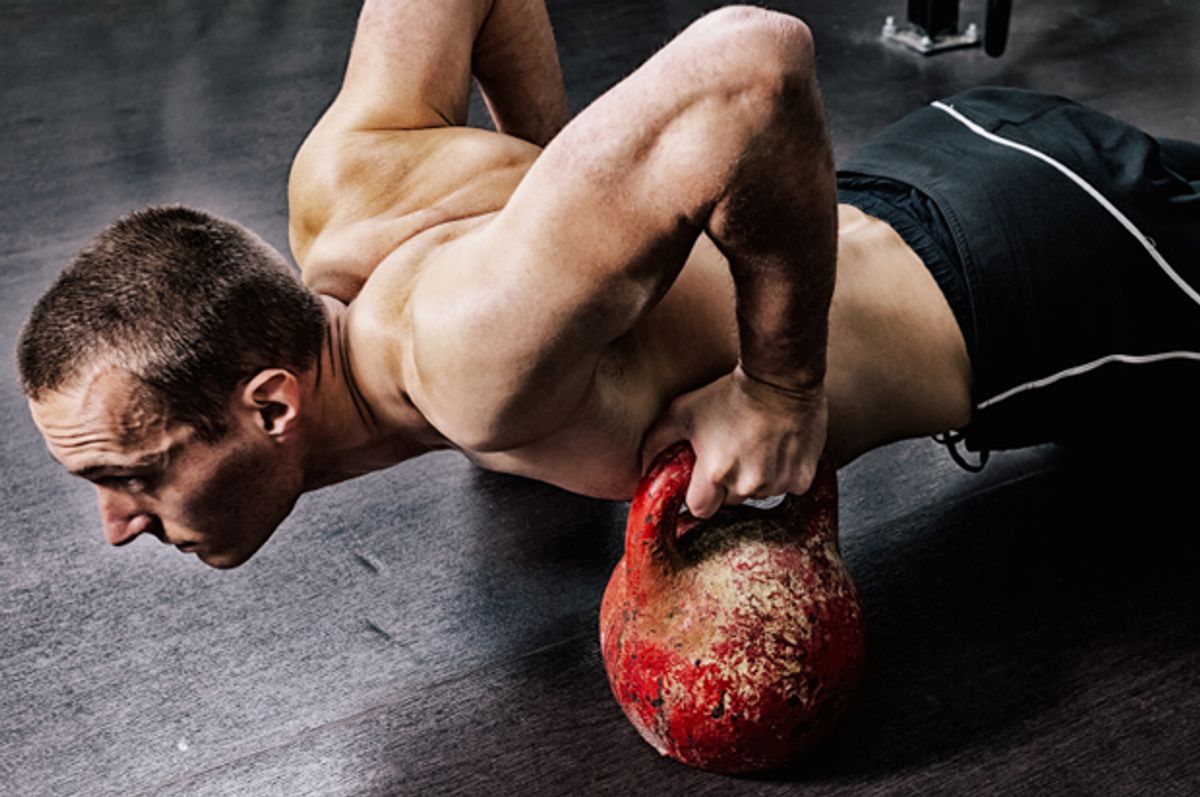 Excerpted from "Learning to Breathe Fire"

Greg Glassman, the guy who invented CrossFit, was a gymnast who’d gone feral. He’d grown up in the San Fernando Valley, then a cradle of world-class gymnasts.

His high school sent a 16-year-old, Steve Hug, to the 1968 Olympics. What made the official programs so good - what created a deep and brilliant pool of gymnasts for coaches to draw on - was a bunch of kids teaching themselves and competing against each other. In the days before draconian consumer protection codes and liability scares, there were stainless steel high bars, parallel bars, and rings in most of the Valley’s public parks. Kids would roam like packs of wild dogs from park to park, to conduct informal workshops and challenges.

Intensity was the foundational element of CrossFit. This came from gymnastics. Gymnastics demands absolute physical commitment in the moment of effort. You have to stick the landing. There is no half vault. Part of what makes CrossFit distinctive as a fitness movement is this idea that life, the universe, could swerve in unexpected ways and make daunting physical demands. The CrossFit mantra of “constantly varied functional movement executed at high intensity” is about mental and physical preparedness to move quickly, do work, bear weight - to be a clutch player in the game of life. Every CrossFitter secretly believes that the people in their box will be the ones to survive the zombie apocalypse.

If you ask a CrossFitter to define CrossFit, you’ll hear a recitation of Glassman’s capsule description: “constantly varied functional movement, executed at high intensity, across broad time and modal domains.” Which basically means hauling yourself and heavy objects quickly, horizontally or vertically, within a period of time that ranges from seconds to half an hour. It’s excruciating. But yesterday’s form of torture won’t be repeated for months.

If you then ask what the rote definition actually means, people talk about being able to do things they couldn’t do before. Women talk about being able to do pull-ups for the first time. Men talk about Olympic lifts. Anyone who’s climbed a 15-foot rope talks about that. CrossFit spurs a lot of first-time achievements and personal records. People are learning to move their bodies and objects through space in a more powerful way, and that sense of mastery keeps them motivated. It makes training seem more like play, albeit of the most exhausting sort. There are nets hanging from the ceiling of many CrossFit gyms. People climb. They jump up on boxes and pull-up rigs. They throw medicine balls high against the wall and drop heavy objects on the ground. The typical CrossFit box is a defoliated orangutang habitat.

The major difference between the movements in this grown-up playground and the kind that happen at a conventional gym is the neurological elements of fitness: coordination, accuracy, agility, and balance. These capabilities require a knitting together of nerves and muscles and adaptations in the brain. They can only be acquired through practice, and are accelerated by coaching. They are entirely absent from the kinds of workouts that people do at gyms.

The modern gym has been deliberately designed to not require any coordination, accuracy, agility, or balance. The attributes of fitness that bind the body and brain together have become the exclusive province of athletes, dancers, and the few lucky children who still climb trees, pop bicycle wheelies, and hang upside down from monkey bars. The stripping-away of coordination, accuracy agility and balance from physical culture - from our modern notion of fitness - has made us weaker, because power, the ability to apply maximum force, requires neural circuitry that’s impossible to develop on a pulley cable.

But it’s worse than that. If all we lost in the transition from functional fitness to circuit-trained muscle development was power, we’d be losing something the modern world doesn’t demand. Most of us can live pretty well, in a physical sense, without building huge amounts of physical power.

The problem is, the area of our brain that’s responsible for full-body movement...that’s not all it does. The brain controls movement in three areas, depending on the complexity of the movement. The primary motor cortex, the lowest-level switch box, is responsible for simple movements like shifting the position of your head. Slightly in front of this area is a more sophisticated set of controls for integrated movements, like reaching for an object. In front of this is a third, even more intricate control center called the attention association area. The attention association area is the part of the brain that controls complex movements that involve the entire body. This is where coordination, accuracy, agility, and balance live. That’s what it evolved to do. That’s what it does in animals. When a predator leaps to latch onto a piece of prey and snap its neck, that complex coordinated pounce comes from the attention association area of the predator’s brain. The neural “go signal” to pounce comes from the same place in the animal’s brain that controls the physical execution of the movement.

So the part of your brain that enables you to do pull-ups and squats - but isn’t engaged for a bicep curl or leg extension - is what gives you the discipline to study instead of watch TV, or to budget vs. rack up debt on a credit card. High-intensity functional movement requires will power, in no small part because will power itself is what’s being built in the nervous system during the workout, through the movements themselves. Every time you snatch a barbell from ground to overhead, the complexity of the movement reinforces the circuitry you need to formulate a goal.

When CrossFitters talk about how the workouts have influenced their lives by making it easier for them to get their act together, they are describing a biological process. On the flip side, the way we allow health club machines to stabilize and limit our range of movement, to literally keep us on track, leaves us less purposeful. The abandonment of complex movement and physical intensity has rendered us, in some fundamental way, less intelligent. We have been kinesthetically brain-washed by the machines that are supposed to make us fit.

From "Learning to Breathe Fire." (c) 2014 by J.C. Herz. Reprinted by permission of Crown Archetype, an imprint of the Crown Publishing Group, a division of Random House LLC, a Penguin Random House company.