I will never wear a bikini 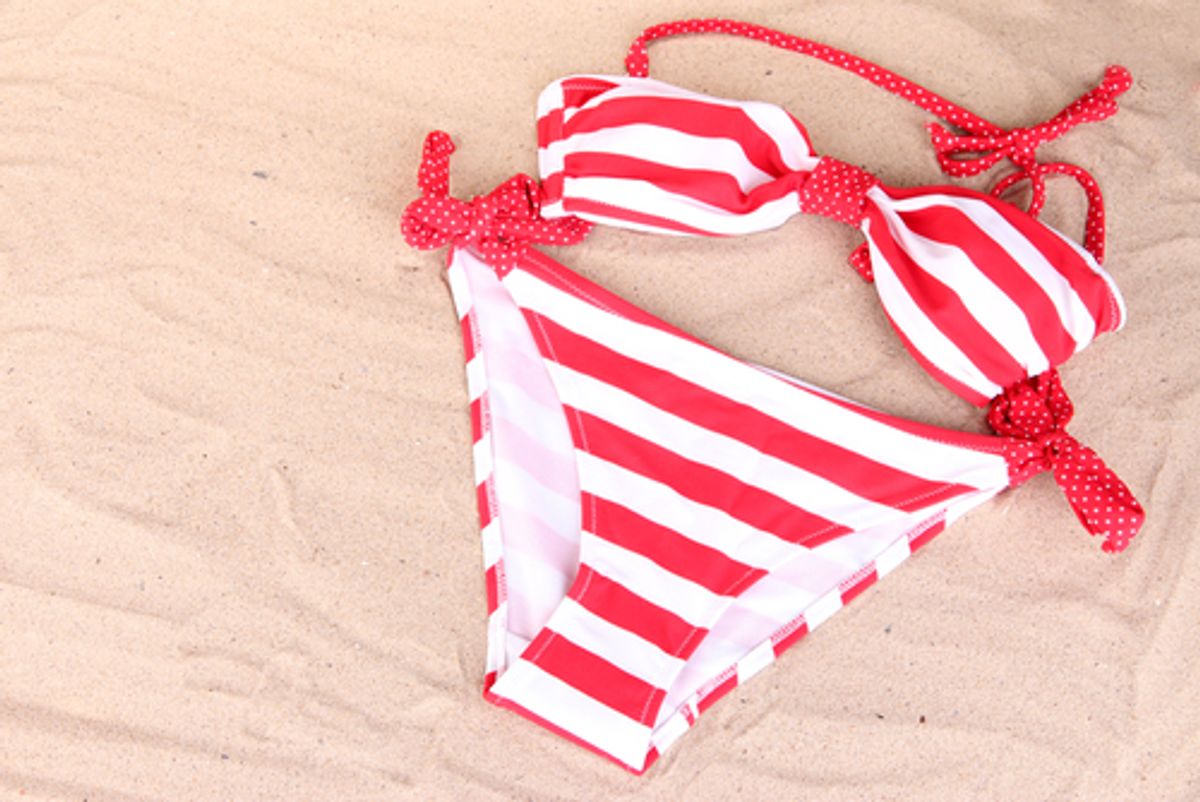 Over the last week, nearly every time I’ve checked Facebook, I’ve seen the same picture of a woman in a bikini.

Do you have a picture in your head of what this woman looks like? I suspect you do already, but if not, go ahead and do a Google image search for that phrase: “Woman in a bikini.” Save a few preggos of the “swallowed a basketball” variety, there’s almost no variation in body type among the top results. Women in bikinis are thin, and young. They are usually white, but tan. Their breasts are between a generous B-cup and a modest D-cup. Their hips are just a bit wider than their waists.

Even Bethany Townsend, the 23-year-old English woman with Crohn’s disease who recently made international news after posting a shot of herself in a bikini with her colostomy bag visible, otherwise adheres quite closely to the “Woman in a bikini” formula. Young and conventionally beautiful, she told ABC News she’s considering a modeling career, after receiving so much praise for the viral photo.

The woman who keeps popping up in my newsfeed, though, is not thin, tan, or easily contained by a few scraps of fabric. She’s Jenny Trout, who wrote the marvelous essay, “I Wore a Bikini and Nothing Happened,” and she looks basically like I would in a bikini, if I ever wore one.

I will never wear one.

Don’t get me wrong: I adore Trout’s essay, and shared it moments after I read it. She’s hilarious, and absolutely correct in her assessment of why people respond negatively to the thought—let alone the sight—of a fat woman in a bikini. “The reason these people do not want to see a fat body in a bikini is because traditionally, that garment is something a woman earns by proving herself attractive enough to exist. If fat women begin wearing them without shame or fear, what's next? Will they have self-esteem? Will they demand respect? Then what will keep them in their proper place?”

Exactly. The culture tells us that women’s job is to be sexy according to a very narrow set of standards, and to hide in shame if we fail. The “fatkini” is a hearty fuck-you to that job description, and I love it for that. I hope Jenny Trout’s post, like Gabi Gregg’s collaboration with Swimsuits for All, will inspire hundreds, thousands, millions of women to be their own bosses when it comes to hotness.

I still don’t want to wear a bikini.

It’s not that I’m ashamed of my fat, wrinkly, blemished, pale, veiny, scarred, bug-bitten, normal, human body. I spent years getting to the point where I’m perfectly happy walking around in said body, and even co-wrote a book about how to do that. The reason I don’t want to wear a bikini has nothing to do with fear of strangers’ judgment or any residual self-hatred; it’s that—I don’t know if you’ve noticed this—wearing a bikini is exactly like wearing your bra and undies in public.

More from DAME: "Is Melissa McCarthy a Big Sellout?"

There are people of all sizes and shapes who would walk around in their underwear if local laws and customs permitted it. I am not one of those people. I like my shorts bermuda-length, my tank-top straps wide, and my necklines at least high enough to keep crumbs from dropping into my bra. Even with all those limits in place, every year, when I transition to summer clothes, I feel like a blinky, befuddled infant for the first few days. There’s sun touching my calves! And upper arms! What is this madness?

Along with Trout, I roll my eyes at thin people who fake-worry that we fatties might just be more comfortable wearing something they find less assaultive. (Personally, I favor bold prints, and once had a friend ask, “Isn’t that a little loud for … someone like you?” Answer: Nope, and Byeee!) But I am indeed more comfortable in public when I’m covered from at least knees to chest. As in, I can relax and go about my business, instead of constantly thinking, I am basically naked right now, yet I am not at home. One of these things must change.

When I was young, I was like this. When I was thin, I was like this. Don’t ask me why—I mean, I can give you some bullshit about my mother being a good Catholic girl who came of age in the 1950s and passed along her values, but I gleefully disappointed her in countless other capacities. I just never liked the inexplicable rule that being near water meant I was expected to take all my clothes off in front of people I wasn’t planning to have sex with or receive a diagnosis from. I’ve always loved to swim, but for years, I avoided it entirely, partly because I was genuinely ashamed of the size and shape of my body, and partly because my thighs are nobody’s business but my own. Discovering the fat-acceptance movement was an enormous boon to my mental health, but so was discovering ladies’ swim shorts with a 9-inch inseam.

More from DAME: "We've Only Been Fighting for Reproductive Freedom for, What? A Century"

Whatever you look like, if you are the kind of person who resents being expected to put on pants before leaving the house, I want to honor that. (I am the kind of person who sleeps in pants.) I want you to see beaches and public pools as sanctuaries, as places where you can feel free to be your best, near-nakedest self! I want you to join Jenny Trout in showing off your lovely, flawed, normal, human body to whatever degree you desire.

But I also want to give a shout out to those folks—fat or thin, pale or tan, wrinkled or taut—who find themselves looking longingly at swimwear designed for members of fundamentalist religious orders. You, too, should strut down the beach with pride, in your skirted capri pants and high-necked tanks! Banish any fears that excess fabric makes you look too old, too unfashionable, too Mormon, and just get out there to enjoy the sunshine, the fresh air, and the sensation of wet spandex clinging to everything.

If you love the beach, you belong at the beach. This summer, wear whatever it takes to get you there.