Forget "The Leftovers" -- "The Strain" does summer TV right 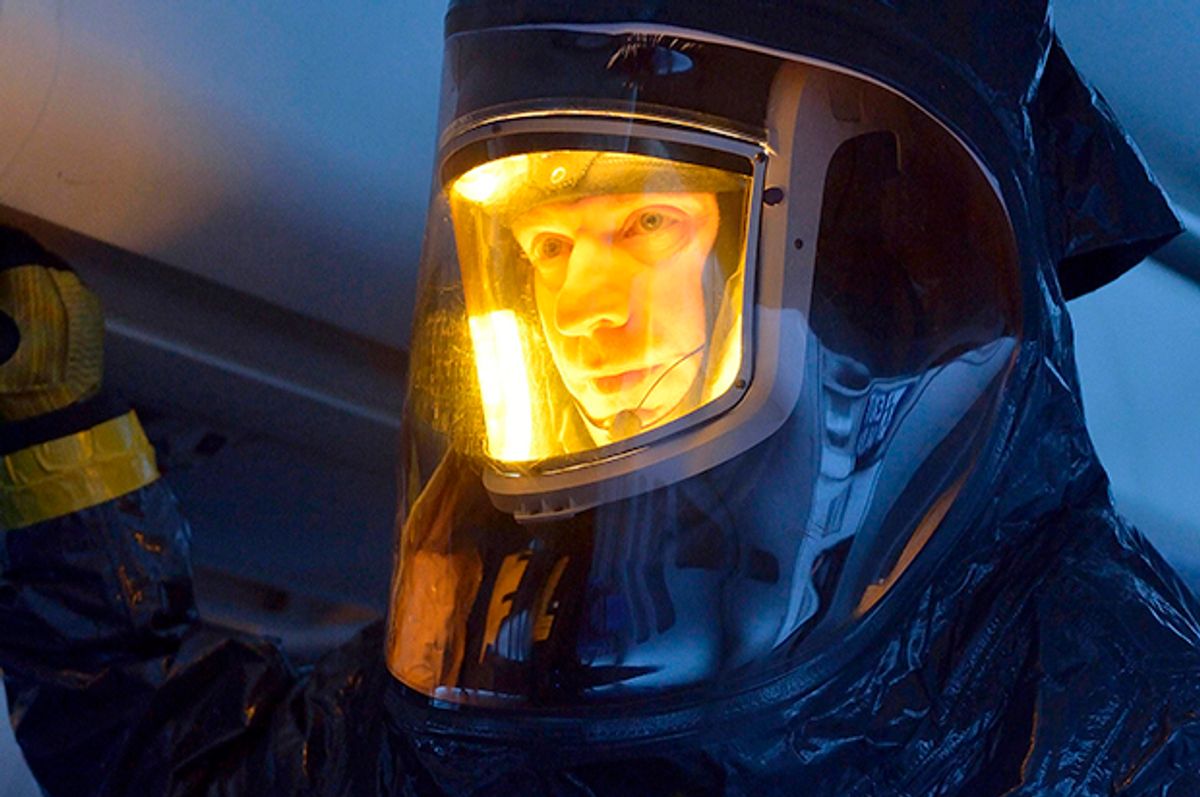 How refreshing it is to see a TV show that knows exactly what it wants to be.

On Sunday night, as another installment of HBO’s lugubrious series “The Leftovers” unspooled, FX had something far more tasty and intriguing. “The Strain,” which debuted last night, is, like its HBO counterpart, a drama about the apocalypse. What it brings to the genre, and what about it feels so particularly new, is a sense of fun.

The first episode of "The Strain" clocks in at 90 minutes, and not a moment feels wasted. The show tells the story of a CDC officer played by Corey Stoll (recently of “House of Cards” and here, jarringly, with a full head of hair) who is among those investigating mass casualties aboard a grounded jet that landed in New York from Berlin. It quickly becomes apparent that this is No Usual Case -- that the deaths aboard the jetliner were sinister in origin and perhaps … weren’t even deaths at all!

The show’s cringeworthy marketing campaign -- and the knowledge that the pilot was directed by horror master Guillermo del Toro -- contribute, here, to a fantastic sense of dramatic irony. We’re well aware, before Stoll’s character is, that there’s something supernatural afoot, even before we cut to a malicious mastermind who’s plotted the whole plane disaster. Often when watching a pilot, one gets the grinding sense that this will go nowhere; last night, watching the machinations of a man bent on eliminating humankind with an ancient, mystical power held within a coffin, I felt confident that “The Strain” would go somewhere insane. Maybe unwatchable, but certainly worth following.

The only gestures this show makes towards profundity in its pilot are a moment in marriage counseling with Stoll and his soon-to-be-ex (I take back what I said -- maybe two moments feel wasted) and a voice-over at the beginning and end of the episode about the power of love, which is forgivable, given the brutal sting. We hear a speech about human love just as a grieving father of one of the plane passengers welcomes home his zombified/vampirized daughter, who’s ready to bite. It’s this hamhandedness -- in another scene, a doc performing a series of autopsies is eaten alive by his subjects as history’s most oversweet song, “Sweet Caroline,” plays -- that comprises one of the most jarring flaws of "The Strain."

But it's easy to overlook this as mere overzealousness. The show’s problems -- the acting in general, Corey Stoll’s wig, some race … issues ... in the portrayal of a Hispanic mercenary who inadvertently brings about our apocalypse -- are almost all glossed over given how dementedly focused the show is on entertaining. If you don’t like what you just saw, an even crazier scene is coming in thirty seconds.

Carlton Cuse, a former executive producer of “Lost” who’s now working on “The Strain,” seems so far to have learned from the ABC serial drama the right lessons about ratcheting up tension and being willing to inject a certain degree of sheer fun into desperate situations. Damon Lindelof, another “Lost” higher-up who’s now doing duty at HBO’s “Leftovers,” learned the opposite lesson from his show, which was too willing to indulge half-baked spirituality. Lindelof's show is unremittingly grim, treating unexplained phenomena resulting in the apparent death of millions not as a question with an answer but as, well, the most crushing catastrophe the world has ever seen. Which it would be! But we’re learning this summer that grieving over the dead makes for pretty unforgiving TV. Better, perhaps, to try to save the living.

Blame HBO, maybe, for the comparative failure of “The Leftovers” to create a watchable apocalypse story. The network is riding high, and has the right to indulge an art project. FX is scrappier, still, and, “Louie” aside, doesn’t devote much space to existential musings. In a cable universe of “Breaking Bad”-inflected antiheroes and improbably gruesome tragedies, I’m ready to see a bit of pizzazz and stupid fun done well. Call it the “Scandal” effect -- “The Strain” hits every beat exactly right in service of a sublimely silly story whose real-world resonances are … limited. I can’t wait to watch the next episode.