A teen goes viral for servicing men in a bar — all for a free drink. But sadly, this isn't shocking at all 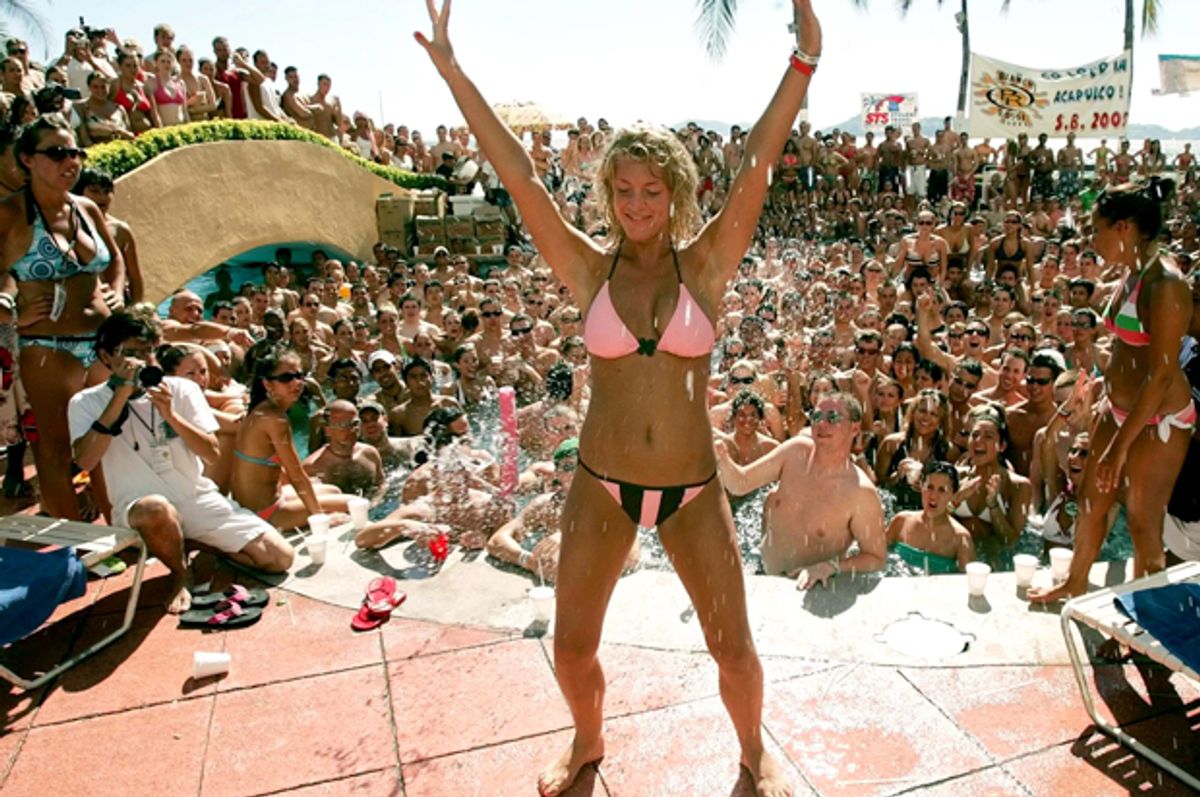 She wore a loose-fitting white tank top that revealed the sides of her breasts and a pair of fluorescent-pink cut-off shorts. The disc jockey could be heard urging her on as she squatted in front of a man with his flaccid penis in his hand. She bobbed up and down three times before moving onto the next man, and then the next and the next. The blonde 18-year-old repeatedly curled her pointer fingers at the men, as if to say, “Bring it on.” In all, she reportedly serviced 24 men in that crowded nightclub, all in the name of a contest for which she was rewarded with a $4 bottle of Cava.

It’s all captured in a now-viral video by an onlooker at the bar in Magaluf, a party-destination on the Spanish island of Majorca. The U.K. press is all over the story and has already identified the girl and interviewed her horrified parents. There is apparently a name for what she did -- this alcohol-fueled game of performative sex -- and it’s “mamading,” which comes from the Spanish word for blow job. Now, there is an abundance of headlines like this one: “'Mamading': The Sexually Degrading New Trend Humiliating Young Brits In Spanish Bars.”

In other words: the “mamading” video looked too familiar to be shocking.

And I couldn't help but think, how long have young women been doing sexual things for free drinks -- or even lame swag? Wet T-shirt contests. Mud wrestling. The entire "Girls Gone Wild" franchise. Mardi Gras. It’s practically built into college culture, the attempt to get women to compromise themselves -- and I say “compromise” because that is what is eroticized, rather than the idea of a woman’s authentic, enthusiastic expression of her sexuality -- whether it’s for a string of plastic beads or a “Girls Gone Wild” trucker hat.

Part of this is the simple fact that adults will always hand-wring about the behavior of young people; and young people will always aim to shock, to differentiate themselves from their parents’ generation, to reclaim sex as their own. They have to do this, just so that they can incredulously yell at mom: “You don’t understaaaaaand! Things are different now.” And things really are different now. But they’re also very much the same.

I will never forget the first time I saw a wet T-shirt contest. It was Spring Break in the late '90s, I was a teenager and I was lying on the couch watching MTV. Some reality-TV special, probably set in Cancun, was on. A young busty co-ed got on stage, pulled her bikini top out from under an oversized white shirt that she had knotted to reveal her taut, tanned stomach, and then men began spraying her with water while she danced -- and bounced. The crowd roared in this thrilling and terrifying way. Fists were thrown in the air, bodies surged forward en masse. I wanted to be her but also not. I wanted an excuse to do as she did, to command all of that male attention and desire, but while also lacking accountability. A contest would certainly do the trick.

Young women's sexuality is so policed and constrained that they are often looking for excuses to be sexual -- sometimes it's drinking too much, sometimes it's a silly contest. Anything for plausible slut-deniability. Of course, sometimes women eschew that -- and they are punished even more fiercely. Last year, a teenage girl became Internet-infamous after being caught on camera giving enthusiastic blow jobs to two different guys at an Eminem concert in Ireland. After the slut-shaming that ensued, she was so upset she had to be sedated at a hospital. At the time, The Frisky's Jessica Wakeman wrote an open letter to the girl's parents:

Certain rules about sexuality dictate your daughter’s life. She’s expected to LOOK sexy and sexual and be desirable by men and boys alike. But she’s also not ... supposed to BE sexual. She’s supposed have an air of sexual knowledgability and an enticement to young men around her, but not actually seek out sex or enjoy it too much. ... For young women like your daughter, sexual experience is [the] standard they’re supposed to live up to, but it’s also a taboo.

The schizophrenic nature of our attitudes toward sex make everyone sneaky about it. Women looks for excuses to be sexual, and men look for way to trick them into being sexual. You know what is truly disturbing about the so-called Magaluf girl story? She was reportedly told that in exchange for this sexual stunt she would be given a "holiday." It turned out that was the name of a cocktail, which she was given for free. Joke's on all of us.