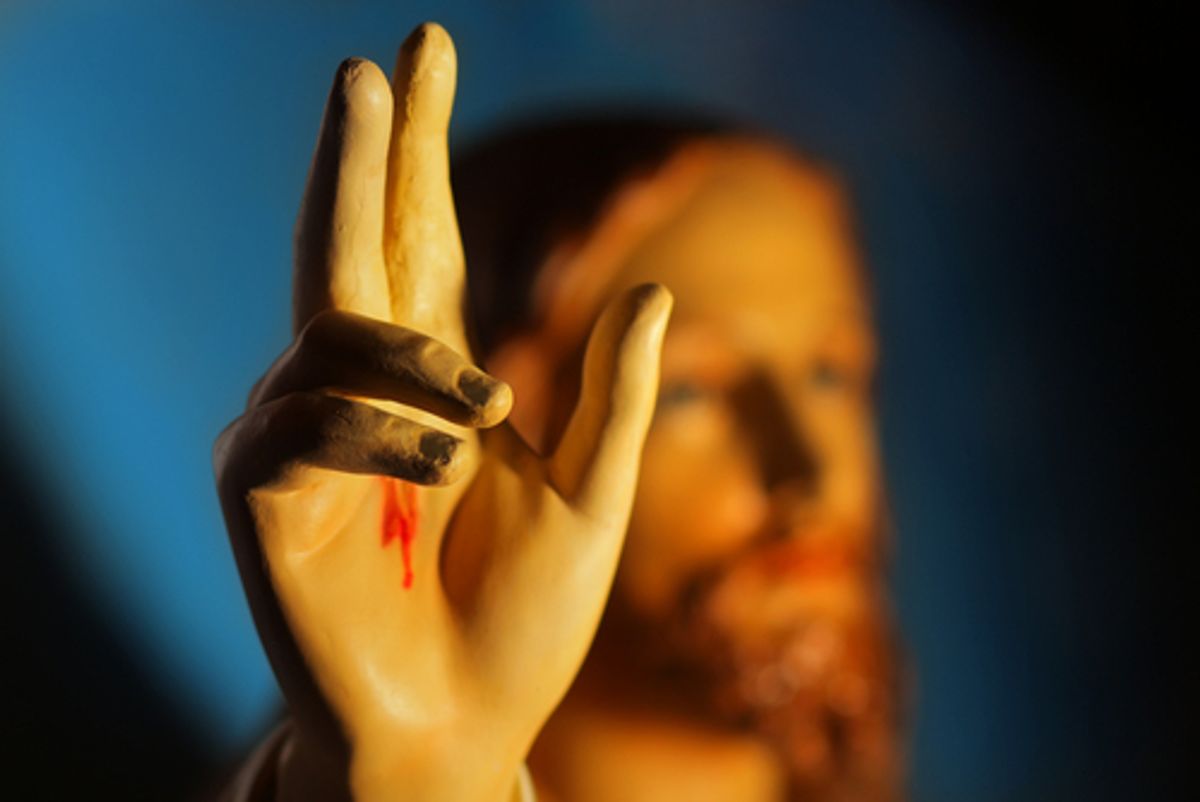 The poll was conducted July 1-2 among 1,000 U.S. adults using a sample selected from YouGov's opt-in online panel to match the demographics and other characteristics of the adult U.S. population. On a wide range of political issues, from healthcare to gun control, from raising taxes on the rich to climate change, respondents were asked what would Jesus support or oppose.

According to the results of the poll, a majority of Democrats and independents have read the same version of Christianity’s Holy Book as I. For Republicans, however, it appears that, once again, they’ve conflated Ayn Rand’s Atlas Shrugged with the Bible.

“I was sick and you looked after me….I tell you the truth, whatever you do the least of my brothers, you also do for me,” Jesus said.

The Bible makes it clear Jesus was a Marxist before Marxism had a name. He distrusted the rich. “It’s easier for a camel to walk through the eye of a needle than it is for a rich man to enter Heaven,” forewarned Jesus. The credo of the Beatitudes demonstrated Jesus saw the world in terms of class struggle. “Blessed are the poor in spirit, for theirs is the kingdom of heaven. Blessed are the meek, for they shall possess the earth.”

The decline of the mainstream church has allowed the Christian Right to misuse the Gospel to champion unfettered capitalism. For Republicans, “prosperity theology” has replaced the Beatitudes. In this Ayn Randian philosophy, God rewards the faithful with material wealth. The flip side of this theology is that to be poor means you are of little faith, and, ipso facto, must be a sinner.

On guns, 68 percent of Democrats believe Jesus would support stricter gun laws, whereas only 28 percent of Republicans think likewise. Things that go bang hadn’t yet been invented during Jesus’ time. But swords of the first century were the guns of today. “Put your sword back into its place. For all who take the sword will perish by the sword,” said Jesus. (Matthew 26:52)

Clearly, Democrats align themselves more with the values of Jesus than the proclaimed party of Jesus, the GOP. To put Republican values in view, consider Matthew 25:31-46. In this oft-quoted New Testament passage, Jesus says, “For I was hungry and you gave me something to eat, I was thirsty and you gave me something to drink, I was a stranger and you invited me in, I needed clothes and you clothed me, I was sick and you looked after me, I was in prison and you came to visit me.”

A popular blog mocked the idea of a Republican Jesus with a mock passage from a fictitious conservative Bible. In this twisted version of scripture, Jesus says, “You were hungry and thirsty, so I eliminated funding for Meals on Wheels and food banks. You were a stranger, so I vilified you and demanded you be deported. You were naked, so I called you an evil liberal who hates conservative family values. You were sick, so I repealed your only hope for health care. You were in prison, so I tortured you.”