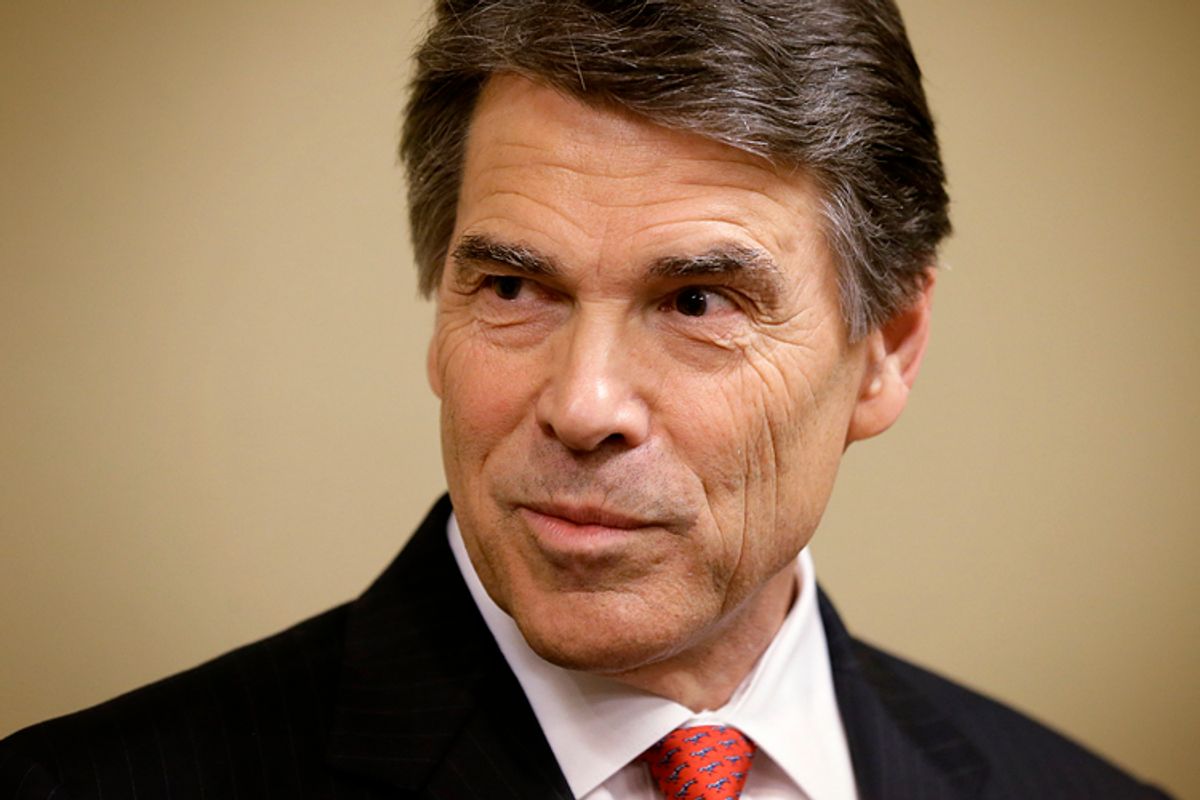 On Nov. 17, 2010, Eric Opiela sent an email to Gerard Interiano. A Texas Republican Party associate general counsel, Opiela served at that time as a campaign adviser to the state’s speaker of the House Joe Straus, R-San Antonio; he was about to become the man who state lawmakers understood spoke “on behalf of the Republican Congressmen from Texas,” according to minority voting-rights plaintiffs, who have sued Texas for discriminating against them.

A few weeks before receiving Opiela’s email, Interiano had started as counsel to Straus’ office. He was preparing to assume top responsibility for redrawing the state’s political maps; he would become the “one person” on whom the state’s redistricting “credibility rests,” according to Texas’ brief in voting-rights litigation.

In the Nov. 17, 2010, email, Opelia asked Interiano to look for specific data about Hispanic populations and voting patterns.

“These metrics would be useful to identify the ‘nudge factor’ by which one can analyze which census blocks, when added to a particular district [they] help pull the district’s Total Hispanic pop … to majority status, but leave the Spanish surname RV [registered voters] and TO [turnout] the lowest,” Opiela writes to the mapmaker.

Interiano responded two days later: “I will gladly help with this Eric but you’re going to have to explain to me in layman’s terms.”

Two years and seven months after that email exchange -- and one year ago on June 25, 2013 -- the U.S. Supreme Court issued a 5-4 ruling in Shelby County v. Holder,which struck down a provision of the Voting Rights Act of 1965 that had allowed the federal government to “pre-clear” redistricting maps proposed by Texas and other states with a history of discriminating against minority voters.

In a follow-up email on Nov. 19, 2010, Opiela explained to Interiano that he called his proposed strategy: “OHRVS” or “Optimal Hispanic Republican Voting Strength.” Opiela defined the acronym-friendly term as, “a measure of how Hispanic, and[,] at the same time[,] Republican we can make a particular census block.”

Lawyers for the African-American and Hispanic voting-rights plaintiffs consider Opiela emails “a smoking gun.” The correspondence will play a starring role at a trial scheduled to start today in a San Antonio federal court in a redistricting case, Perez v. Perry. The litigation pits the plaintiffs, who have been joined by the Obama administration, against Texas and its Republican state leaders, including Gov. Rick Perry in his official capacity.

If the Obama administration and the minority plaintiffs show in Perez that the Texas defendants intentionally discriminated against minority voters by diluting their votes, they could dramatically undo the Texas consequences of Shelby.

Critics of the Supreme Court’s ruling in Shelby say the opinion “gutted” Section 5 of the Voting Rights Act, through which the federal government imposed the pre-clearance requirements on Texas and other states when they proposed changing their voting laws.

But the high court stripped only a pivotal lever used to trigger Section 5, specifically Section 4b of the same act. That stricken provision laid out formulas for determining which states, based on their histories of discrimination, the Department of Justice could impose preclearance requirements upon.

The Shelby ruling left intact: Section 3 of the Voting Rights Act -- or its “Secret Weapon,” as Travis Crum, a former clerk for U.S. District Judge David S. Tatel of the D.C. Circuit Court of Appeals, refers to the provision in his 2010 Yale Law Journal article. In the article, Crum explains that the Voting Rights Act’s Section 3 allows: a federal court to find evidence of a state intentionally racially discriminating against voters and therefore order the state to submit to DOJ preclearance.

Nina Perales, vice president of litigation for MALDEF, the Mexican American Legal Defense and Educational Fund in San Antonio, who represents Perez plaintiffs, believes Opiela’s emails show evidence of intentional discrimination and thereby provide the federal government with a spare key to restart Section 5, replacing the one the Shelby decision removed from the ignition.

The Texas defendants, represented by Greg Abbott, Texas attorney general and Republican gubernatorial nominee, have denied that they drew redistricting maps in a discriminatory way that intentionally divided or over-concentrated minority populations, so those groups lost the opportunity to elect representatives of their choice. They argue Perez should be dismissed, since in one disputed district “Hispanics continue to represent a majority of the district’s citizen voting age population and registered voters” and the Voting Rights Act does not require state map drawers to create districts that would assemble Hispanic and African-American voters,” so they form a majority “capable of controlling the outcome of elections.”

Opiela declined to comment for this story. He represents members of the Texas  Republican Congressional Delegation, who have fought against turning over their written communications with state legislators about redistricting plans to Perez plaintiffs; it is the delegation’s policy not to comment about Perez, Opiela said.

Interiano, who is now a Google community and government affairs manager in Austin, referred all questions to Abbott’s office, which did not respond to a request for comment.  In recent months, Interiano has spent almost 20 hours answering questions under oath for the government and plaintiff lawyers. In a May 14, 2014, deposition in Perez, he described himself as “a Hispanic Republican.”  When he initially started as Straus’ counsel in October 2010, Interiano testified, he was unsure of the meaning of acronyms such as TO. “I think that I understood some of these terms in a vacuum. I don’t believe that at that time I would have fully understood how the data was used,” he said. In his deposition, though, Interiano confirmed for the federal government and plaintiff lawyers that following Opiela’s email, he collected data based on its guidance.

Clare Dyer helped gather that data for Interiano. She serves as a mapping and redistricting researcher for the Texas Legislative Council, a state agency, which provides, according to its website, “nonpartisan research” for all state players in the redistricting process.

When MALDEF’s Perales asked Dyer at her May 15, 2014, deposition about the emails, the state researcher said that Opiela appeared to be asking for “metrics,” which Interiano later sought from her office. Her interpretation of Opiela’s meaning in his emails: “[H]e’s trying to shore up -- well, he says that -- shore up districts so he can get -- have them appear to be high Hispanic, but low Spanish surname registered voters. … You could give the appearance of having a Hispanic majority district, but it wouldn’t have the capability to elect -- for the Hispanics in the district-- to elect the person of their choice.”

David R. Richards, who also represents Perez plaintiffs and shares a notion or two about Texas politics as the ex-husband of the late former Democratic Texas Gov. Ann Richards, said about Opiela’s emails: “I think everyone sees them as a smoking gun.” The emails show a clear attempt “to switch out Hispanic precincts with high voter turnout and substitute them with low voter turnout” — knowing that the Hispanic populations traditionally vote Democratic — but, at the same time, wanting to meet then obligations of the Voting Rights Act, which, at the time, still were in effect, Richards said. “You look like you preserve the vitality of a Hispanic district because of the raw numbers but the reality is you have — because of substituting out the high turnout with low turnout — hollowed out the core of the district and weakened the Democratic component of the district,” Richards said.

MALDEF’s Perales believes the Opiela emails “reveal a strategy that was very much similar to the redistricting strategy of Texas struck down by the Supreme Court in LULAC v. Perry in 2006, an attempt to create sham Latino districts to prop up incumbents not preferred by Latino voters.”

Erin Velandy, lead counsel for the federal government in Perez and an attorney in the Voting Section of the Civil Rights Division of the U.S. Department of Justice, declined to comment and referred calls to her agency’s public relations department, which did not return a call.

In its list of witnesses filed on June 9, though, the federal government has included Interiano as one it intends to call and Opiela as another it might call. Interiano testified at an earlier redistricting case for Texas — one the state filed in a D.C. federal court before Shelby in July 2011.  In its complaint in that case, Texas sought a declaration that its redistricting plans complied with the Voting Rights Act.  A three-judge panel of the D.C. federal court denied Texas the declaration and found the state in violation of Section 5 of the Voting Rights Act. After Shelby, the D.C. court had to vacate its ruling. And the court had never ruled on the question of Texas’ alleged intentional discrimination, since prior to Shelby, such a finding was unnecessary to find the state in violation of Section 5.

In its opinion, however, the D.C. court expressed doubts about Interiano’s testimony. “[T]he incredible testimony of the lead House map drawer reinforces evidence suggesting map drawers cracked VTDs [vote tabulating districts] along racial lines to dilute minority voting power. … This and other record evidence may support a finding of discriminatory purpose in enacting the State House Plan. Although we need not reach this issue, at minimum, the full record strongly suggests that the retrogressive effect we have found may not have been accidental,” the D.C. judges concluded.