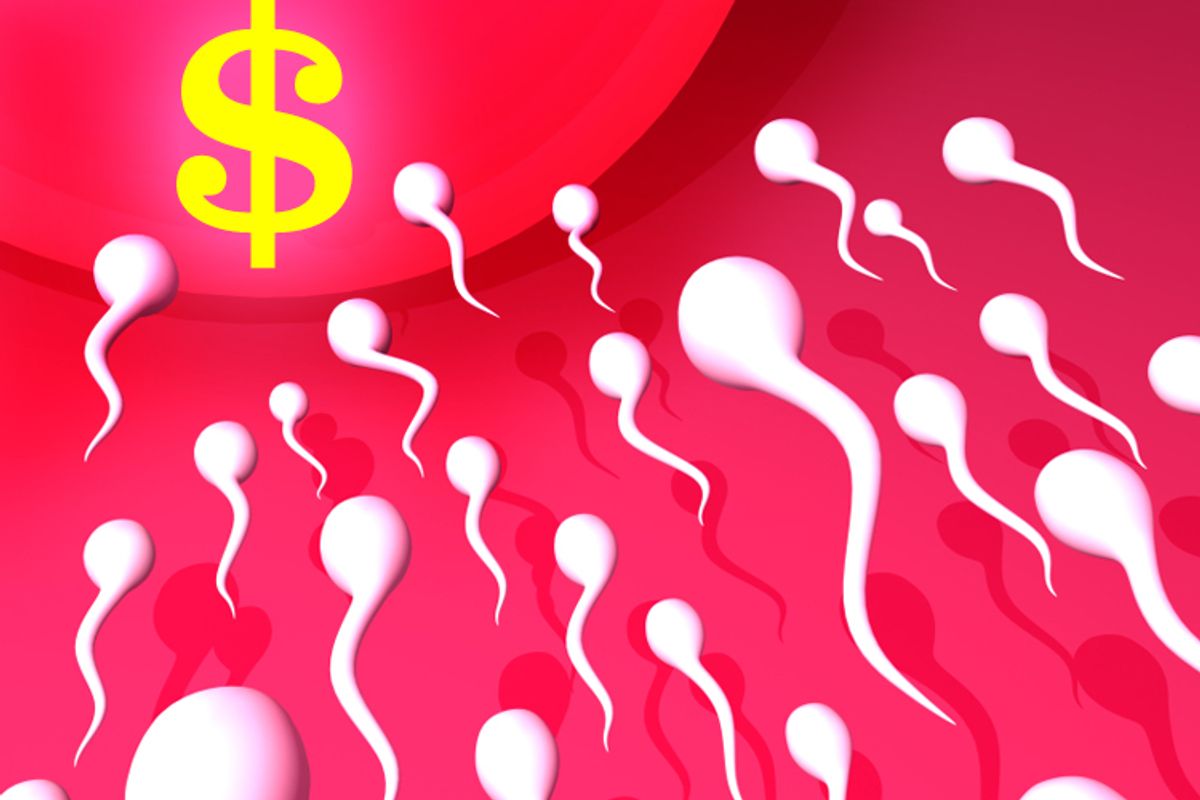 Having a baby is crazy expensive -- especially when getting pregnant in the first place doesn't just involve a fun 20 minutes at the right time of month, but rather necessitates fertility treatments or sperm donation. Sperm banks can charge hundreds and hundreds of dollars for a vial of sperm, which often isn't enough to result in a pregnancy. But, just when it seemed like sperm donation might be a luxury reserved for the rich, the trusty Internet has stepped in to solve the problem for women who can't afford traditional donors. Multiple online forums now offer women the opportunity to find donor sperm for free.

Established donor sites such as the Known Donor Registry -- which might be considered a social network for sperm donation -- make it their business to pair women with sperm donors in a safe, prescreened process, offering women different methods of insemination should they follow through with a match. But, as NPR reports, many women who can't afford services like Known Donor Registry are turning to cheaper, less official channels. Take Jennifer R., for example:

Eighteen-year-old Jennifer R. hoped online sperm donation could help her have a baby. When she was 16, Jennifer, who asked not to use her last name to protect her medical privacy, found out she has an ovarian disorder that her doctors say will make her infertile by her mid-20s. If she wants to have a baby, she's been told, Jennifer has to get pregnant soon.

But she doesn't have a partner, and she says buying sperm from a sperm bank is too expensive for her. The cost of a single vial of sperm runs between $500 and $700, and most women require multiple vials to get pregnant.

So, with her mother's blessing, Jennifer went online and posted a message on a forum where men donate sperm for free (she did not use Known Donor Registry). She says a lot of men replied, and one caught her interest. They emailed, exchanged photos, and eventually spoke using Skype. He said he wanted her to have sex with him in order to conceive.

Surprise! Free sperm donors are men who are trying to get laid. Now, it would be wrong to generalize about the motivations of all the sperm-offering men online -- after all, #notallspermdonors are interested in having sex with their recipients. Plus, even Known Donor Registry offer members the option to copulate as a method of insemination.

But these forums are not Known Donor Registry. They are open to anyone and they're unregulated, which has the potential to create so many legal quagmires. First, men who donate sperm have little legal protection, but women who procreate with free donors online also put themselves at risk for engaging in a serious future custody battle. And, of course, there's also the issue of infections and diseases, of both the sexually transmitted and genetic variety, which don't have to be disclosed as they do at official sperm banks.

All of this is to say: finding free sperm donors on the Internet is probably a bad idea, and might involve men whose ambitions aren't exactly in line with the women seeking them out. But -- and this is a big but -- labeling these forums "no good" is by no means meant to shame the women who are have used/are using/might use them. Actually, it's an opportunity to talk about the ethics of sperm donation, as well as reproductive decisions, who gets to make them and how much freedom women really have when it comes to pregnancy choices. When people are essentially relying on Reddit to fulfill their reproductive desires, we should probably be questioning why that is.