A youthful 1 percenter gets horrible advice and sends his money to Republicans opposed to his agenda. Here's why 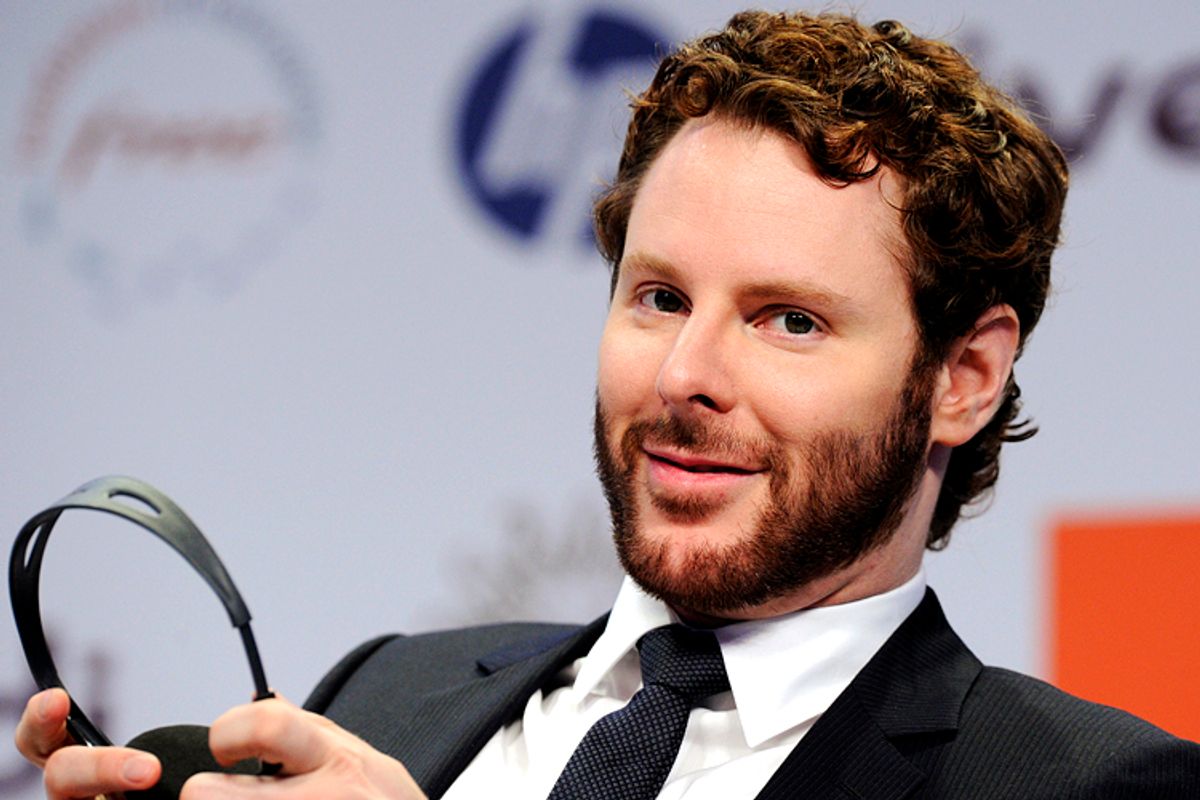 The last we heard of the Napster billionaire and Baby Mugwump, Sean Parker, his interest in politics had led him to embrace a "No-Labels" style approach in which he would pay large sums of money to various inside the Beltway players to help him decide which members of both parties he should donate to. You see, he's very concerned about the loss of bipartisan spirit in Washington and he wants to invent a new app for Congress!

Parker, who has recruited new advisers this year to help focus his political activities, has expressed a strong interest in backing middle-of-the-road candidates with a demonstrated interest in compromise and deal-making.

“The theme across the board is encouraging or supporting elected officials who have shown themselves willing to work across the aisle,” Parker said in an interview earlier this year.

Yesterday, we got an update on his exciting new project. He's hired the company of the tri-partisan former adviser to conservative Democratic Sen. Max Baucus, President Barack Obama and the U.K. Conservative Party Jim Messina and his hardcore GOP partner Charlie Black.  And they're doling out the big bucks to Republicans who have drawn primary challengers. Evidently, the Beltway now sees that the only way to bring the country back to the sensible center is by helping very conservative Republican incumbents win reelection. How very convenient for the GOP.

Take Thad Cochran, for instance.  Other than the fact that he won his runoff election with the help of Democrats trying to thwart a Tea Party extremist, there is very little evidence that he's interested in compromise and deal-making. Sure, he's been in Congress since the time of Moses so there are examples in his past of working across the aisle. And he loves to bring home the bacon, so there has been some horse-trading over the years. Back in the day that was business as usual. But let there be no doubt about just how conservative this long-running senator from Mississippi is. Here's just one example: Only a handful of senators had the chutzpah to vote against the Detainee Treatment Act of 2005, a piece of legislation that prohibited "inhumane treatment of prisoners, including prisoners at Guantanamo Bay." He didn't have to do that, obviously. The vast majority of his caucus voted for it. He wanted to. He genuinely believes that prisoners should be treated inhumanely.

Mississippi's own Boss Tweed, Haley Barbour, thinks Sean Parker is doing a heckuva job. He says Parker is a "canny contributor" who wanted to know how his money would be spent to help Cochran win. He's quoted saying:

“All Sean Parker seemed concerned about was: can we win, and the kind of job Thad Cochran’s going to do in the United States Senate. He liked the fact that Thad Cochran was somebody who could get something done in Washington in a productive way."

But how about one of the other recipients of Parker's largess, Idaho congressman Mike Simpson? Surely he's a big bipartisan dude, right? Well, not really. It's true that his Tea Party opponent accused him of being in bed (not literally) with Nancy Pelosi, but that was a bit of an exaggeration:

In the current Congress, spanning 820 votes, Simpson and Pelosi have voted the same way just 29 percent of the time, according to OpenCongress.org, a website created by the pro-transparency Sunlight Foundation.

Still, 29 percent isn’t nothing and some may say, if Simpson was a real conservative, he would vote with Pelosi 0 percent of the time.

Maybe, but not every congressional vote is polarized, and even some of the most conservative members of Congress have voted with Pelosi at least on some issues. For instance, no one would confuse Rep. Michele Bachmann, R-Minn., for a liberal, yet Bachmann and Pelosi have voted the same way 24 percent of the time since January 2012.

Simpson has voted with his party 95 percent of the time. (emphasis added)

One can certainly see why the Republicans wanted to tap their whale for him. He's a very reliable conservative vote who is as likely to take a bipartisan leadership role as the Texas loon Louis Gohmert. What could be more perfect?

Parker also gave to the leadership PACs of Peter Roskam and Pat Tibieri which was very generous. After all, leadership PACs are for the purpose of giving money to whomever the leadership member wants to curry favor with. Bipartisanship and aisle crossing is completely irrelevant to their needs. But it was a nice gesture.

And finally, he seems to like the cut of South Carolina Sen. Lindsey Graham's jib. He gave a big wad of cash to an unnamed PAC that was supporting him but they declined to share what it was about or who was involved. One certainly hopes it went to help Graham with his Benghazi! efforts. Nothing could be more helpful in cleaning up the toxic atmosphere in Washington than hysterical scandal-mongering. And no senator is more hysterical than Lindsey Graham.

It's fairly clear what's happening here. The youthful billionaire decided that he needed to talk to the "experts" about what to do with his money. And all those experts, knowing a rich sucker when they see one, persuaded him that the biggest problem in Washington was the lack of bipartisanship, which they attributed to the Tea Party. They told him that the only way to get anything done is to give money to incumbent Republicans.

These are the same Republicans, by the way, who believe that the government should be drowned in the bathtub and to that end they have pledged to never raise taxes for any reason. How's that for  "middle of the road"?  That's right. Grover Norquist started strong-arming GOP official into signing his Taxpayer Fairness Pledge back in 1986 when Parker was still in diapers and long before the Tea Party was even a gleam in Rick Santelli's wild eyes. By 2012 he had 95 percent of the Republican Party officeholders signed on to it. If Parker wants to know what is the strongest underlying barrier to making Washington work he should read up on the history of the conservative movement and then ask his experts if any of these Republicans they want him to save signed on to Norquist's pledge. (Hint: all of them)

But that would require Parker to have the slightest clue, which he clearly doesn't. You almost can't blame the political sharks for going after a fool who's sitting there bobbing around mindlessly, bleeding money all over the place.