From Superman to the Green Turtle: How superhero comics are really assimilation fantasies 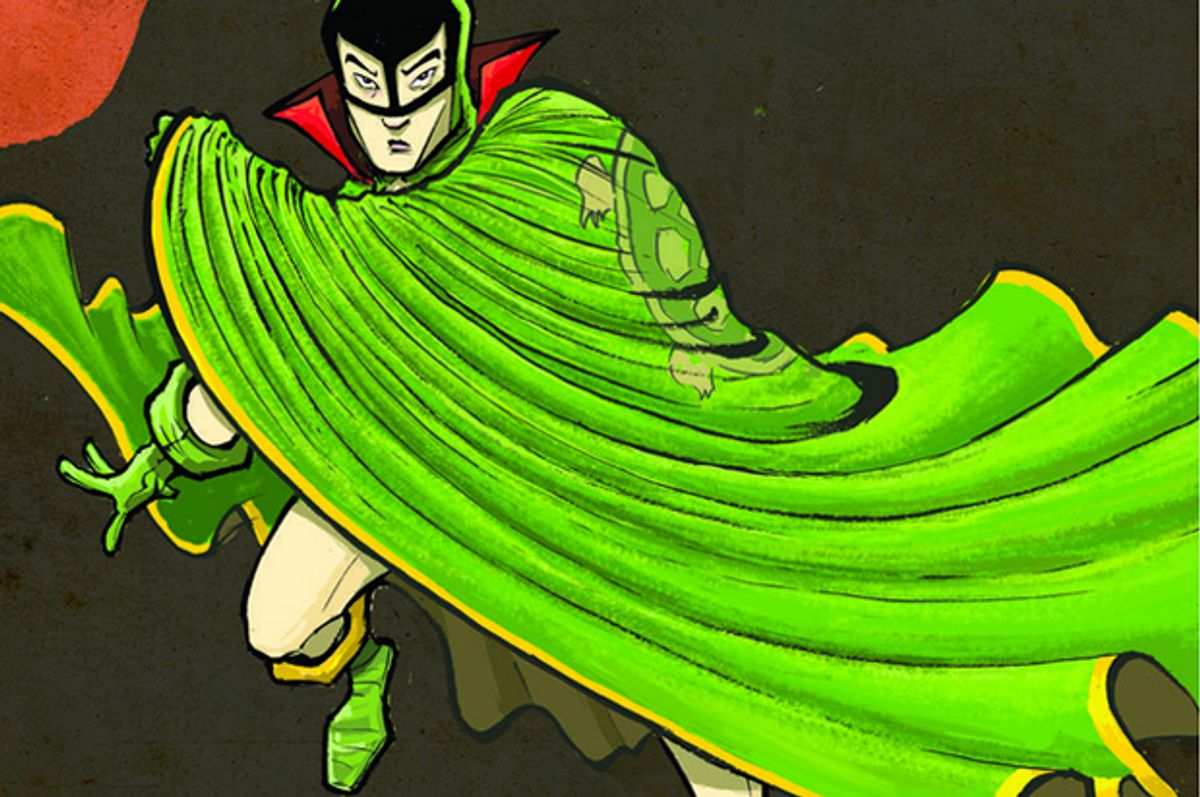 Superhero stories are assimilation narratives. They always have been, ever since Jewish comic creators Jerry Siegel and Joe Shuster wrote a tale about a baby from another planet who comes to Earth, gets raised by good sturdy country folk, and grows up to become the greatest American hero.

That tradition continues, with some variations, today. G. Willow Wilson and Adrian Alphona's popular Ms. Marvels series from Marvel comics focuses on Kamala Khan, a Pakistani Muslim-American girl who is trying to negotiate American culture and her new shape-shifting superpowers at the same time. And publisher First Second has just released "The Shadow Hero," a graphic novel by Gene Luen Yang and Sonny Liew about the Green Turtle, a Chinese-American superhero who battles gangsters in World War II-era San Francisco.

Yang and Liew didn't invent the Green Turtle; he's the creation of Chu Hing, a little-known Chinese American artist who worked on early superhero comics. Hing supposedly wanted to make the Green Turtle Chinese, but his editors didn't think it would sell.

So Hing fudged; as Yang and Liew show in an afterword, the original art for the World War II Green Turtle adventures managed to never show the hero's face. Hing also coyly refused to give him an origin; every time the Green Turtle is asked about it, something interrupts before he can spill the tale. Yang  and Liew conclude that Hing was deliberately leaving open the possibility that the character was in fact Chinese.

In their cheerfully humorous updated version of the hero, Yang and Liew have a lot of fun playing with the line between assimilating and staying true to your roots. Our hero, Hank Chu, just wants to be a grocer and help his dad, until his mom is saved by a Superman-like hero. She becomes obsessed with turning Hank into a hero too — it's not the child who wants to become Americanized in the face of parental disapproval, but the parent who wants the child to assimilate despite his indifference.

In his mom's efforts to get him superpowers, Hank ends up, not with super-strength, but with skin that turns pink in the rain. This is inspired by the coloring of the original Hing comics, where the Golden Turtle was portrayed with very pink skin, perhaps in an effort by the editors to make sure he read as white. But it's also obviously a wink by Yang and Liew to superheroes as assimilation fantasies. One of Hank's powers, literally, is to turn Caucasian (-ish).

Again, this is all in good fun. But it also raises some uncomfortable questions. After all, the original Golden Turtle was, effectively, forced to assimilate; his editors demanded he abandon visible signs of his ethnicity. This resonates with other heroes as well. Characters like Superman or Captain America or Batman or later Spider-Man or the X-Men were all created by Jewish writers and artists; with their double-concealed identities, they could all be seen as metaphors for assimilation, but the characters are rarely Jewish themselves. One of the few actual Jewish superheroes, the Thing, didn't officially reveal his ethnic identity until 2002 — 40 years after his first appearance.

Moreover, the price for assimilation, in superhero narratives, often seems to involve painful tradeoffs. Clark Kent, Peter Parker and Steve Rogers before the Captain America super-soldier formula — they're all nebbishy weaklings, uncomfortably suggesting emasculated Jewish stereotypes. Moreover, when superheroes do become their powerful American selves, the folks they fight are often villains who can be read as sharing with them a marginalized ethnic identity. The X-Men are mutant outcasts who hunt down other evil mutant outcasts. Superman in "Man of Steel" fights immigrants from his original home in the name of America and Earth. At the end, he cries as he snaps the bad Kryptonian's neck. He's heartbroken that he's betraying his people — but to be an assimilated superhero, he has to betray them nonetheless.

Yang and Liew are aware of this dynamic, and they take care to avoid its least savory aspects. The Green Turtle does fight against Chinese gangsters. But he's defending Chinese shopkeepers and, significantly, his own family, rather than protecting white people. The gangsters, for that matter, are portrayed with some subtlety. They're not irredeemable monsters (like the Kryptonians in "Man of Steel"); instead they seem to be trying to find their way in America, much as Green Turtle is.

Finding their way for the gangsters means trying to build a Chinese empire, or kingdom in America — not by conquering the U.S., but just by creating their own (criminal) community and power base. The emperor of this ethnic enclave could be Green Turtle himself; Ten Grand, the leader of the gang, wants Hank to be his heir, and marry his daughter, Red Center. It's a choice between a kind of ethnic nationalism and assimilation. On the one hand, there's Red Center, who needs Hank's help, appears to love him,  and asks him pointedly, "Do you really think dressing up in that silly costume will make them accept you?" And on the other hand, there's Hank's white police contact, who spews an ethnic slur and then feels terrible about it. Who should he choose?

It doesn't necessarily seem like the cop should be the natural choice. But, of course, it's pre-ordained. This is a superhero comic. Barring the occasional reform of Magneto, the bad guys are bad guys, and the good guys are good guys.  You can sympathize with the gang, but at the end of the day, they're still thugs. In a law-and-order paradigm, the only way to criticize or to resist the mainstream is to be a criminal. And if all resistance is criminal, then not assimilating is itself a kind of crime.

"The Shadow Hero" confronts these issues with humor, insight and intelligence, but at the end of the day it can't quite escape its genre demands. To defend truth, justice and the American way, Hank has to pick the cop and the friendly Superman-guy over the woman who (maybe) loves him. That's not an unhappy ending, exactly, but you can see why it might make a hero hide his face.