GOP's Reagan love explodes: How the Gipper is causing a major party clash 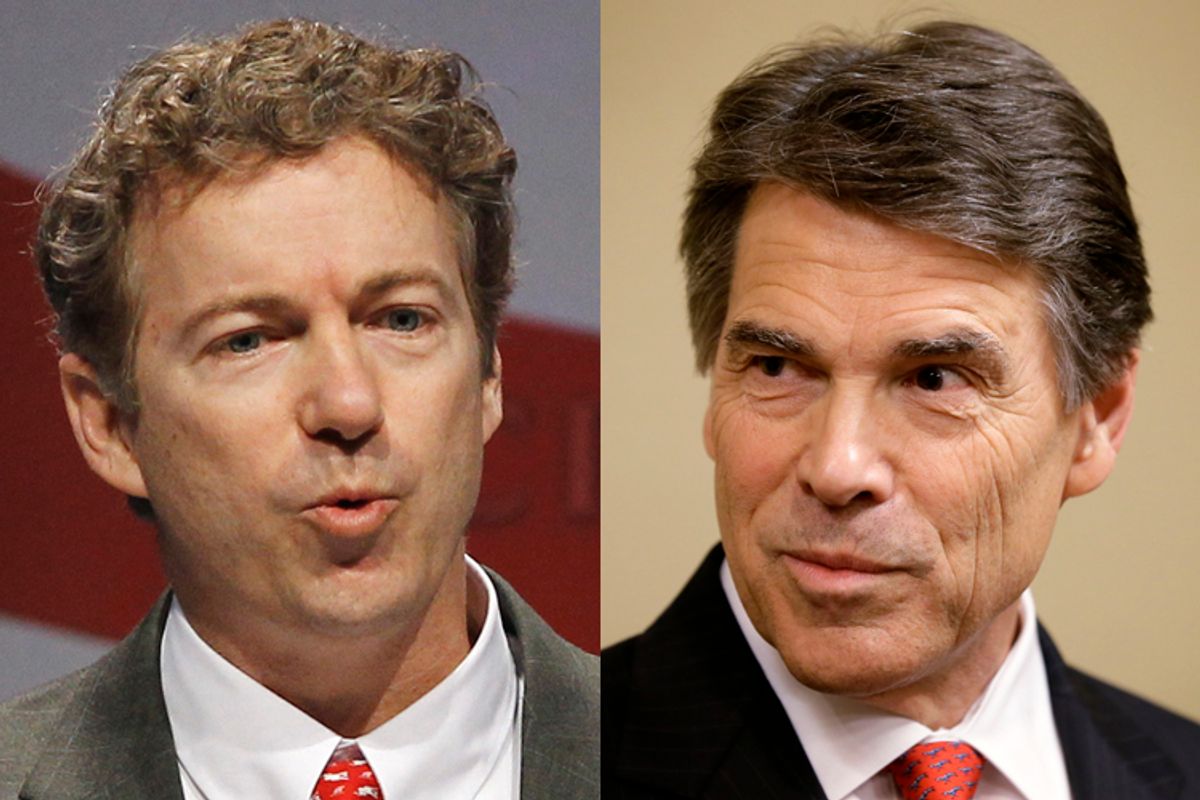 One of the most interesting political stories over the past decade has been the massive realignment of national security politics. Stretching back to the Cold War years, the Republicans were always viewed as the party of national security, the tough-on-communism “Daddy Party” that would do the dirty work of defending the free world while the Democrats kowtowed to the hippie peaceniks. Then George W. Bush came along and made such an epic hash of Iraq that he undid a couple of generation’s worth of public faith in Republican foreign policy in a few short years.

It just so happened that when America finally quit the GOP on national security, Barack Obama was standing right there with his “no dumb wars” policy. After some sniped Somali pirates, a quickie war in Libya, and a dead terrorist mastermind, Democrats were the new party of national security.

Now that’s all gone to hell too. A string of foreign policy crises, capped by the resurgence of Islamic extremists in Iraq, has left the public soured on Obama and conflicted on what the U.S. should actually do. The Republicans, who spent most of the Obama era on defense on national security, suddenly have an opening. Some of the GOP’s 2016 wanna-bes are trying to take advantage of that opening and make the public forget that it hates Republican foreign policy. And they’re doing it the only way Republicans know how: by saying “Reagan” a lot.

It all started last month when Rand Paul wrote an Op-Ed for the Wall Street Journal slamming both George W. Bush and Obama for the troubles in Iraq and calling for a “new approach” to foreign policy, “one that emulates Reagan's policies, puts America first, seeks peace, faces war reluctantly, and when necessary acts fully and decisively.” Ed Kilgore pointed out at the time that Paul’s description of the Reagan national security nirvana carefully elided some aspects that Paul himself opposes (like bloated defense budgets). Kilgore also predicted that “Paul’s attempt to appropriate the Reagan mantle in foreign policy will be sharply contested by ‘Bush Republicans’ of all varieties.”

He was right. Texas Gov. Rick Perry wrote a July 11 Washington Post Op-Ed bashing “isolationism” on Iraq and rebuking Paul’s attempt to remake himself in Reagan’s image. Because Reagan has become an actual political deity among Republicans, Perry’s attacks on Paul veered creepily into accusations of insufficient reverence for the one true Reagan: “Paul conveniently omitted Reagan’s long internationalist record of leading the world with moral and strategic clarity.” Perry invoked the glory of Reagan eight times throughout the op-ed (not counting the accompanying picture caption) and made about as clumsy and obvious a grasp for the Gipper’s legacy as can be imagined: “I personally don’t believe in a wait-and-see foreign policy for the United States. Neither would Reagan.”

Unimpressed by Perry’s response and as eager as the rest of us to make fun of Perry’s glasses, Paul fired off yet another Op-Ed, this time for Politico. He waved off Perry’s foreign policy vision entirely — “I’ll make it my personal policy to ignore Rick Perry’s opinions” — and made another play to cast himself as chief among Reagan’s disciples by Reaganing no fewer than seven times in just two short paragraphs:

This is where many in my own party, similar to Perry, get it so wrong regarding Ronald Reagan’s doctrine of “peace through strength.” Strength does not always mean war. Reagan ended the Cold War without going to war with Russia. He achieved a relative peace with the Soviet Union—the greatest existential threat to the United States in our history—through strong diplomacy and moral leadership.

Reagan had no easy options either. But he did the best he could with the hand he was dealt. Some of Reagan’s Republican champions today praise his rhetoric but forget his actions. Reagan was stern, but he wasn’t stupid. Reagan hated war, particularly the specter of nuclear war. Unlike his more hawkish critics—and there were many—Reagan was always thoughtful and cautious.

At this point, it wouldn’t be surprising to see Perry fire back at Paul for blasphemous usage of the pronoun “he” when the truly pious would invoke the name of Reagan at every opportunity.

And thus, what is ostensibly an argument about how to best approach a complicated and potentially disastrous conflict in the Middle East has turned into a Reagan fight. It’s a competition between two grown men to see who can write the most embarrassingly laudatory prose about the man who stopped being president 25 years ago.

Interestingly, the fight between Perry and Paul has completely veered away from the only Republican president whose legacy actually matters when it comes to Iraq: George W. Bush. Neither Perry’s response to Paul nor Paul’s response to Perry mentioned Bush once, even though they’re arguing over Bush’s war and Bush’s legacy. Americans still don’t like Bush and still especially dislike him for Iraq, so for Republicans like Perry who argue for renewed military intervention, it’s preferable to fight over who’s more Reagan-y than who’s less Bush-like.

Rand Paul wants to have the Bush fight. He wants Republican foreign policy to move away from the neocon adventurism that defined the Bush-Cheney years. Establishment figures who backed the Iraq war and still believe in projecting American military might abroad are quick to push back — if they don’t attack Paul directly, they send messages to “the Rand Paul types” within the GOP. Just yesterday at Politico’s “Playbook Lunch” with the Cheney family, Dick Cheney (who is enjoying something of a renaissance among Republicans) declined to comment when asked specifically about Rand Paul’s ideas but made a point to attack “isolationism” as “crazy.”

The funny thing is that, at least on Iraq, Paul and Perry aren’t that far apart from one another. “Some of Perry’s solutions for the current chaos in Iraq aren’t much different from what I’ve proposed,” Paul wrote in Politico. And so they’re fighting over Reagan, since the Republican political toolbox these days is largely limited to “what would Reagan do?”