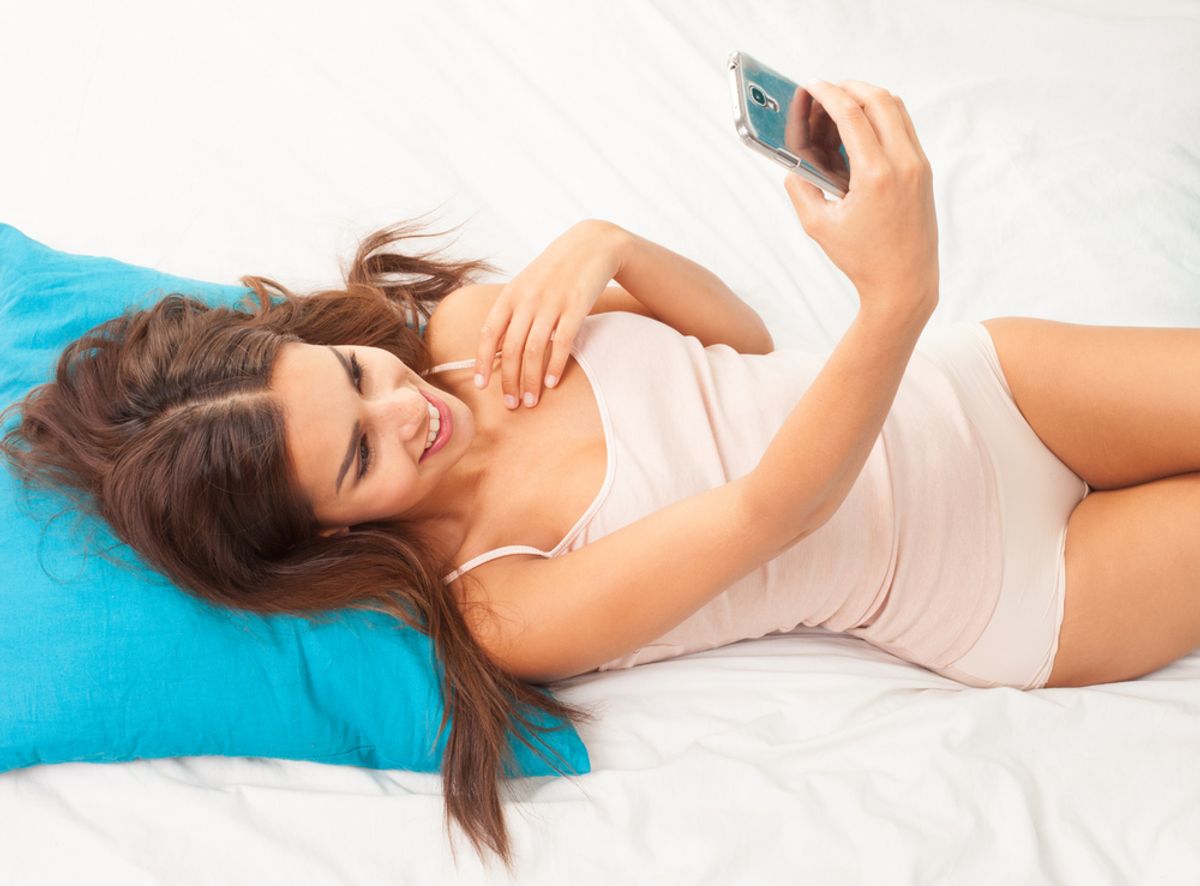 If a young woman thinks she looks hot in that chesty selfie she just set as her Facebook profile picture, chances are another woman thinks she looks incompetent. Well, maybe not entirely incompetent, but certainly less capable than if she were wearing a buttoned-up button down, a cardigan and classic Levi's. According to a new study published on Tuesday, girls and young adult females who post revealing photos of themselves on social media are received by their peers as being less attractive -- physically and socially -- as well as less competent, in general.

"There is so much pressure on teen girls and young women to portray themselves as sexy, but sharing those sexy photos online may have more negative consequences than positive," Elizabeth Daniels, the study's lead researcher and an assistant professor of psychology at the University of Colorado, said in a statement. "We need to understand what [young women] are doing online and how that affects their self-concept and their self-esteem."

Daniels and co-author Eileen Zurbriggen conducted their investigation by creating two fictitious social media profiles, both for a 20-year-old woman whom they named Amanda Johnson. For the sake of finding common ground with other females in their character's age group, Amanda "liked" musicians such as Lady Gaga, the book "Twilight" and the movie "The Notebook." Both profiles contained all the same information, with only one difference: profile picture. In one profile, "Amanda" (really a young woman who agreed to have her photograph used in the study, as with the other profile picture) was shown wearing a low-cut red dress with a slit up the leg, revealing a garter belt and some cleavage. In the other profile, a second young woman was shown wearing a short-sleeve T-shirt, jeans and a scarf that covered her chest.

The researchers polled a total of 118 girls and young woman, 58 of whom were between the ages of 13 and 18 and 60 of whom were aged 17-25 and were no longer in high school. Each participant was shown one of the two Facebook profiles and then asked to respond to a series of statements about Amanda's appearance, such as "I think she is pretty," as well as statements about her social attractiveness ("I think she could be my friend") and her task competence ("I believe she could get a job done"). Responses were given on a scale of 1-7, with 1 indicating strong disagreement and 7 indicating enthusiastic agreement.

In all three areas, the "non-sexy" profile fared better, with respondents finding the covered-up Amanda prettier, friendlier and more qualified to complete a given task. Daniels and Zurbriggen found the largest disparity between photos in the category of task competence, indicating that "a young woman's capabilities are really dinged by the sexy photo."

Daniels and Zurbriggen believe the study raises important questions about the way we perceive females, like why we focus so heavily on girls' appearances and what this can tell us about gender. But the biggest takeaway, according to the researchers, is that young women should be careful about how they portray themselves online. "We really need to help youth understand this is a very public forum," Daniels said, calling her findings "a clear indictment of sexy social media photos." Her advice to girls and young women? "Don't focus so heavily on appearance ... Focus on who you are as a person and what you do in the world." Daniels also added that posting photos of women participating in favorite hobbies or sports and showcasing their identities is a better way to go.

That's all fine and good and, in most instances, solid advice. But Daniels seems to overlook the fact that for some young women, sexuality is a defining feature of their identity, and they shouldn't be diminished, reviled or rejected if that's the case. To suggest that young women conform to this misguided assumption that their sexuality is somehow linked to their competence doesn't do much for young women. It is important, though, for girls to consider why is it, exactly, that they want to upload that sexy selfie instead of a more conservative image -- still, covering up isn't for everyone, and that's OK.

And, in the instance that girls and teens are simply responding to a culture that focuses primarily on their physical appearance and all but demands they portray themselves in a sexual manner, the issue is less with the way those young women respond and more with the cultural expectations themselves. Sure, posing in a pantsuit instead of a string bikini is one way to subvert social expectations of how women should portray themselves, but it doesn't solve the virgin/whore dichotomy that Daniels and Zurbriggen call out in their study. Even with these findings, young women are still damned if they do and damned if they don't post a sexy photo -- so it's important that girls, teens and young adults consider how they want to represent themselves online and whether it's an accurate representation. Even if it's a sexy one.