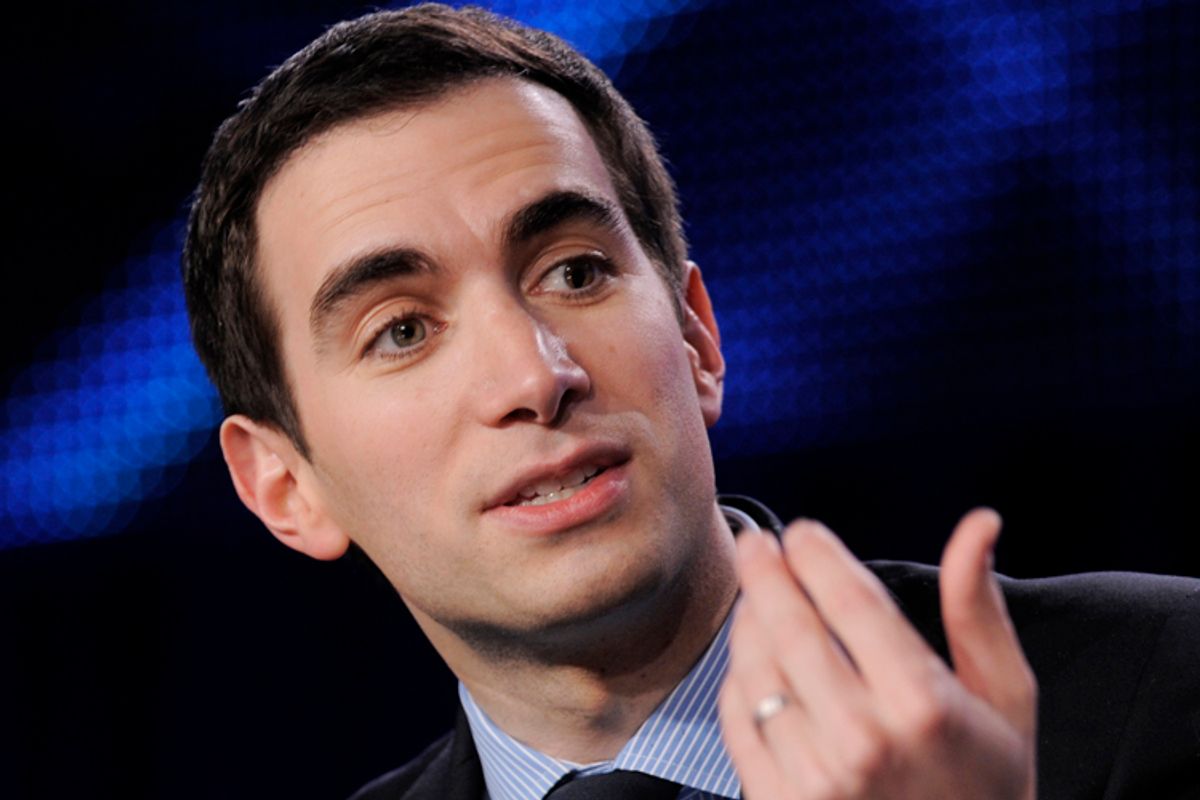 Let's say you're, OH I DON'T KNOW, the CEO of a major pharmaceutical company, and you plan to renounce your corporation's United States citizenship and reincorporate in the Netherlands to avoid paying taxes. Let's also stipulate that your father is a United States senator from West Virginia. This has the potential to be something of a P.R. disaster for you, your company and perhaps your father -- if it's not massaged correctly in the press. If only there was a reporter out there who'd collaborate with you to spin this in a way that presents you as the victim, that makes the existence of corporate taxes the enemy, that pins the blame for this naked cash grab on those clowns in Congress who just can't get their act together ...

Sorkin is the financial journalist behind the New York Times' DealBook blog, where he helps awful plutocrats share their human sides and share Hard Truths. Sorkin is famous for doing such gumshoe journalism as finally going to check out Occupy Wall Street after a bank CEO asked him to scope out the scene for potential danger. As Alex Pareene wrote about Sorkin's project, "DealBook is unusually attuned to the sensitive task of vetting the public image of Wall Street."

Earlier this week, Sorkin wrote a story about the pharmaceutical company CEO in question: Heather Bresch, "the chief executive of Mylan, the giant maker of generic drugs." She is the daughter of Sen. Joe Manchin. And oh god yes, she's performing a nifty little acquisition maneuver to reincorporate her company in the Netherlands, to pay a lower tax rate on business operations done abroad. Bresch tells Sorkin that the decision is "driven mostly by its strategic merits" while "the lower tax rate is just an added benefit." Which doesn't make a lot of sense, because she then complains at length about how the United States corporate tax structure forced her into making this decision.

“It’s not like I’ve not been vocal and up there talking to anybody who’d listen to me,” Ms. Bresch told me in an interview about the crusade she had been on in Washington for years, talking to lawmakers about overhauling the corporate tax code to make United States companies more competitive. “But you know what they all say? ‘Yeah, uh huh, O.K. Uh huh.’ ”

She added: “We were one of the last ones in our sector to do this. So it’s not like I was blazing the trail. If you put on your business hat, you can’t maintain competitiveness by staying at a competitive disadvantage. I mean you just can’t. The odds are just not in your favor.”

Just listen to this poor pharmaceutical corporation executive sob, as she worries about the future of her beloved (renounced) America if it doesn't get its act together: We might not have more dumb websites if people don't listen to her!

“Obama had the wherewithal to muscle through an entire health care reorganization, right?” she pointed out. “Like it, don’t like it, whatever. This tax reform is even, in my opinion, on a larger scale than that because it’s a global economy.” She added, “Our government, right or wrong, has taken the viewpoint of, ‘We’re not negotiating.’ It is what it is. I think that standoffish mentality around tax has now continued to compound and complicate this issue.”

But Ms. Bresch is even more nervous about the larger implications: “You know what makes me want to cry? I think whoever the next Facebook is, why would you ever start that company here in the United States?”

Here we have an awful human being who just got finished cackling and slappin' high fives with board members and shareholders about how they've slashed their tax bill. She loves that they're reincorporating in the Netherlands. It is her favorite thing. But! Oops! May get some bad press! Not to worry, because Andrew Ross Sorkin will lend a sympathetic ear to her tale of Big Government and slap on this headline: "Reluctantly, Patriot Flees Homeland for Greener Tax Pastures." That may sound like Sorkin's mocking her, but lines like this suggest he really might buy into this "reluctant" business: "Ms. Bresch says she entered the deal reluctantly, and she genuinely seems to mean it."

There is a hilarious P.R. effort among corporate executives and their people in Washington to turn corporate tax reform into the most pressing populist cause of our time. That the very soul of America will dissipate if they continue to have to pay such burdensome rates. (Not that they all do, anyway. Let it be said that maybe Bresch isn't a great CEO if she couldn't even figure out another way to weasel out of paying fucking corporate taxes in this country.) This is a difficult hog to sell.

Fortunately for them, they have Andrew Ross Sorkin out there to help them wage this life or death struggle. CEOs who relocate are the martyrs, refusing the government their productive services until these confiscatory rates are lowered. And once they're lowered, they'll ... keep moving abroad until they're lowered again. But once the rates reach zero, they'll ... keep moving abroad until the regulatory state is fully dismantled. And so on and so on, as far down as you can go.