"Daily Show" host's a gutsy satirist but a deferential interviewer. So last night's Hillary grilling was a surprise 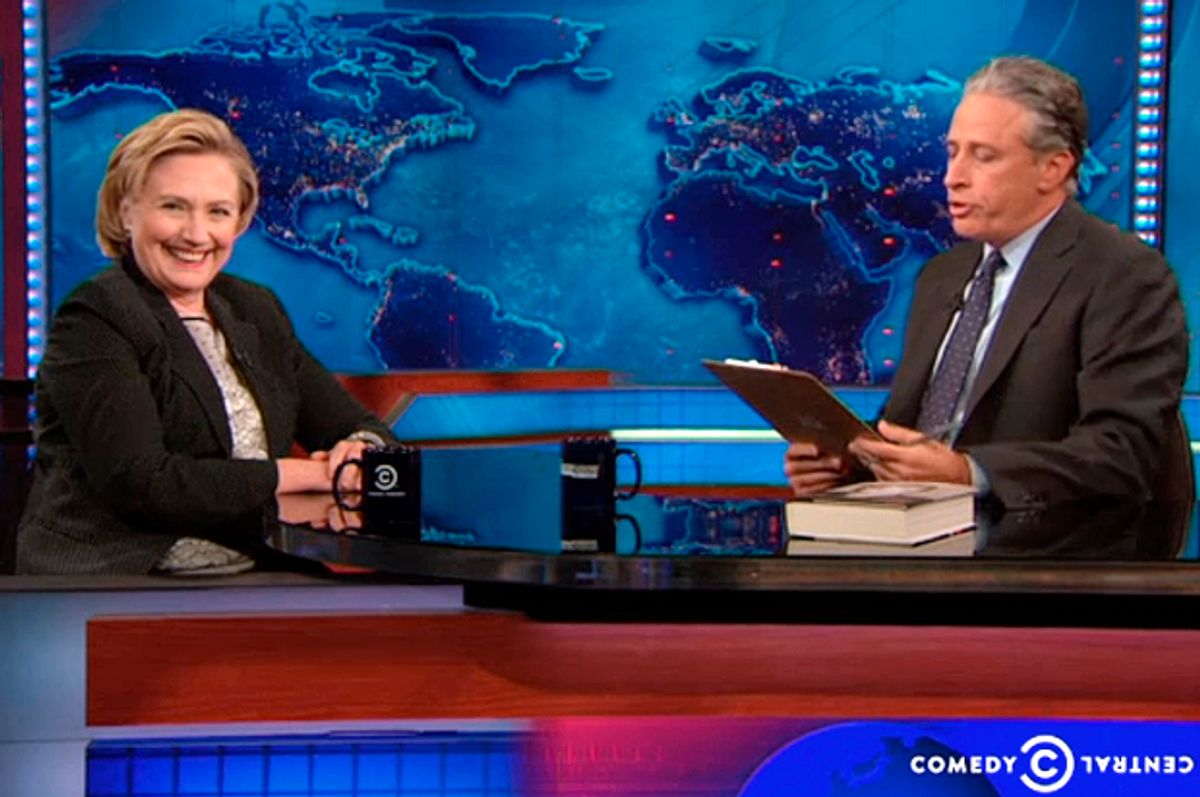 Finally, he mixed things up.

Jon Stewart, historically tooth-rottingly deferential to people in power, broke with tradition by giving Hillary Clinton the best roasting she's gotten on her press tour. After so many tame interviews, Stewart rose to the occasion with surprisingly tough questions. And Clinton still managed to escape pretty much unscathed.

Stewart's interview strategy has always been kowtowing to anyone with actual bureaucratic authority. See his "interview" with Condoleezza Rice, when he put on an intimidated expression and a high-pitched voice to say, "That's one way of looking at it" when she defended the invasion of Iraq as having preempted a nuclear Iraq. But in meeting a person who studiously disavows any special expertise about what has befallen our nation, because she's not thinking too much about the future right now, Stewart surprisingly met his perfect match.

A declared presidential candidate would surely have gotten the soft-soap treatment by Stewart -- why do you think John McCain ended up on his show so often? But Clinton actually took real guff from Stewart. He put her through a mock career aptitude test (the "mock" here indicates both the test's falsity and that it was making fun of just how lame her previous interviewers' attempts to get a declaration of intent had been).

And Clinton, though clearly teasing her host and her audience, at least gave some hint about her intentions when she said that when it comes to an office, the "fewer corners you have, the better." That was what was so uniquely great about her "Daily Show" appearance: that the former secretary of state took full advantage of what Stewart was willing to dish out. The host presented to Clinton a bunch of easy questions -- "Do you enjoy constant, non-stop criticism?" "What has surprised you the most?" -- and she seemed refreshingly relaxed.

Sure, she said she wrote her book on "the third floor of our house" (helpfully reminding us that her house has at least three floors). She also gamely laughed when Stewart remarked on her segue from the subject of her past media gaffes -- what Stewart called "how easily you pivoted from that into inequality in America." Stewart soldiered through Clinton's determination to talk solely about her book, managing to derail her a lot more than, say, Diane Sawyer did, and got a few good jokes in meanwhile.

Her "Hard Choices" book tour has, by and large, hardly been about the choices she made as secretary of state. If she were marketing herself as a Condi Rice-style foreign policy expert, Stewart would almost certainly have been leaning forward with his chin on his fist as she outlined her policy goals.

The most revealing remark Clinton made in the interview, which she quickly qualified, was that "we did a much better job telling the world who we were during the Cold War." It was both startling for its candid nostalgia -- do we really want to go back there? -- and apt. Jon Stewart's guests do their best work when they're under at least mild pressure. If only every night his interview subject could be a major newsmaker who is not currently seeking a mouthpiece for clear policy objectives, he'd be in business.