No hints from Hillary Clinton on 'The Daily Show' 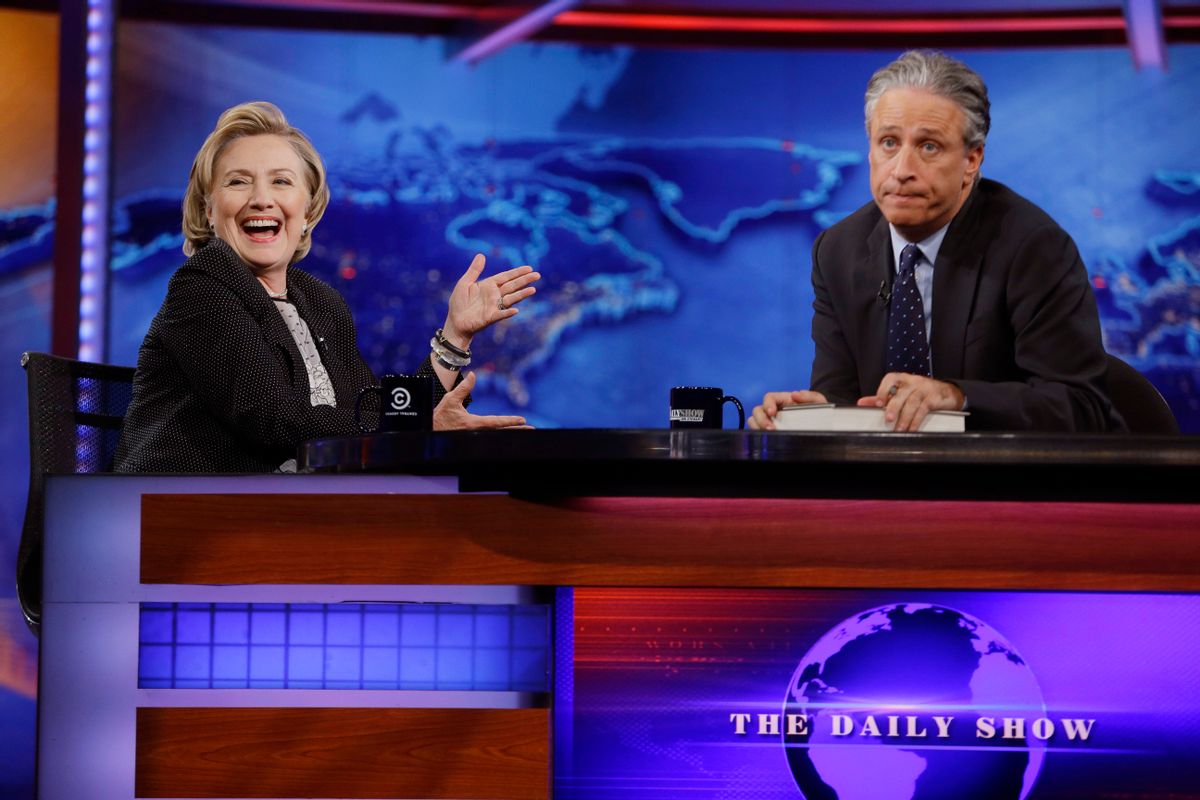 NEW YORK (AP) — Hillary Rodham Clinton gave Jon Stewart no hints about whether she will run for president, but acknowledged during Tuesday's taping of "The Daily Show" that the speculation surrounding her possible candidacy has become "a cottage industry."

Stewart introduced Clinton by saying, "She's here solely for one reason: to publicly and definitively declare her candidacy for president of the United States ... I think."

That proved not to be true.

The two moved on to a series of national and international issues Clinton faced as secretary of state, including the violence and tension between Israel and the Palestinians.

"We're really in a terrible dilemma," she said, noting there has been an offer of a cease-fire brokered by Egypt that Israel accepted but that was rejected by Hamas, which controls the Gaza Strip.

"Part of what I see Hamas doing is, their identity comes from being the violent resistance," she said.

But he kept returning to everyone's main question: the 2016 presidential race, joking, "I think I speak for everybody when I say, no one cares (about the book), they just want to know if you're running for president."

He then took a different tack to try to get a hint from her about her political plans, asking whether she prefers an office with corners, or without them — like the Oval Office.

She didn't go for that bait either.

The 66-year-old former first lady is well aware of the spotlight on her as a potential presidential hopeful, with pundits parsing her every word and books and articles attacking her past actions.

"I've been amazed at what a cottage industry it is, and so, I kind of expect it would continue, so I'm not really paying a lot of attention," she deadpanned.

However, when asked about her recent statement that her family was "dead broke" when they left the White House, she conceded, "That was an inartful use of words" — given the tens of millions of dollars she, her husband and their daughter Chelsea reportedly have earned with just their speeches.

The memoir of her time as secretary of state is No. 2 on The New York Times' nonfiction best-seller list. The hardcover is right behind the No. 1 best-seller, Edward Klein's "Blood Feud," which details the alleged animosity between the Clinton and Obama families.

Clinton last appeared on "The Daily Show" during her 2008 presidential campaign.