Geraldo Rivera and Todd Starnes spout nonsense about the tragedy 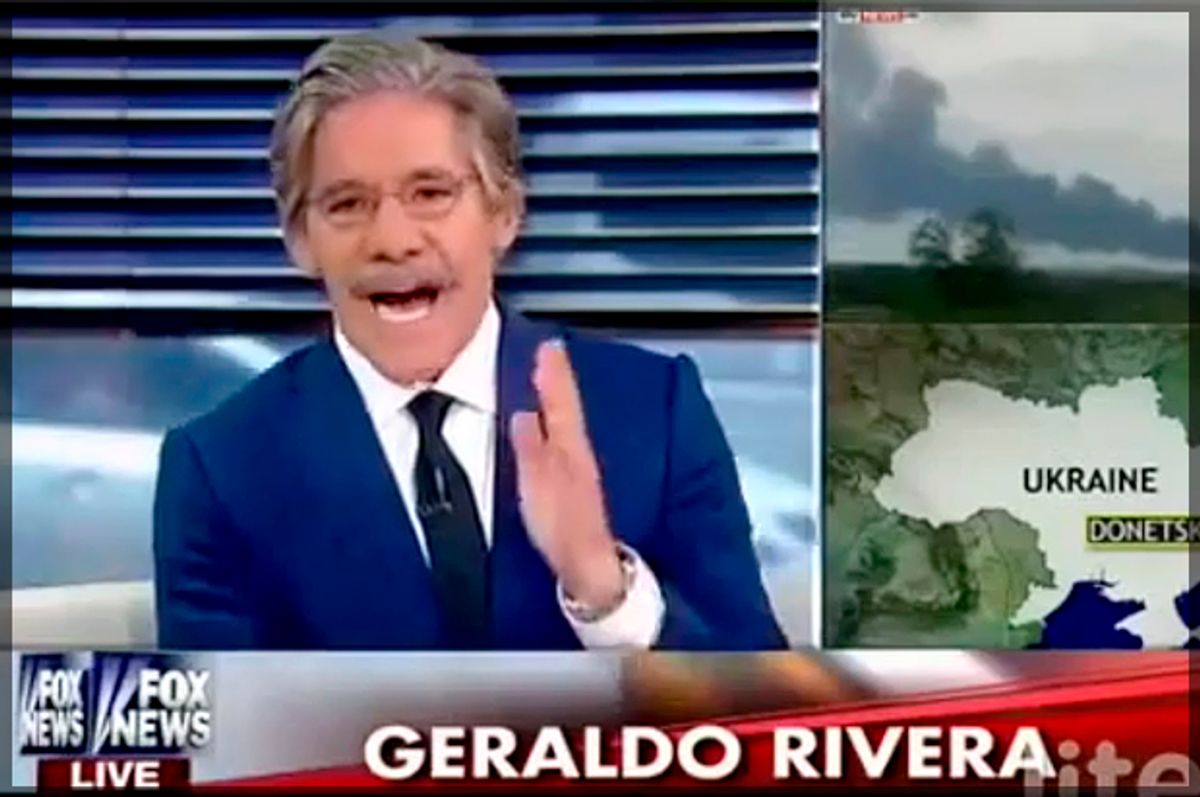 This afternoon, Malaysia Flight MH17, en route from Amsterdam to Kuala Lumpur, crashed in eastern Ukraine, reportedly killing the 280 passengers and 15 crew members on board.

There were initial claims that the plane had been shot down, however, nothing has been confirmed at this time. Malaysia Airlines did confirm that it lost contact with flight MH17. Both Ukrainian and Malaysian officials are calling for an investigation, while speculation and denials fly over responsibility.

Despite the many unknowns in this horrific incident, Fox News is already nestling the tragedy into its own narrative.

Geraldo Rivera has already started playing the blame game. “As a war correspondent, weighing all the facts as they’ve been coming in — admittedly this is my opinion — I believe Vladimir Putin has the blood of these airline passengers on his hands,” Rivera said on Fox's "Outnumbered."

“The Russian leader has been supplying increasingly sophisticated weaponry to the pro-Russian anti-Ukraine activists in eastern Ukraine. There are reports sophisticated surface to air missiles have been spotted in that region," Rivera continued. "They is very little command and control from Russia’s point of view over those rebels in eastern Ukraine. I believe as I sit here today what happened is Russia supplied that weapon system so those rebels could shoot down Ukrainian helicopters and Ukrainian warplanes attacking them, and they saw this aircraft in the sky, these undisciplined pro-Russian Ukrainian rebels shot down the innocent passenger jet.”

Watch below, via Mediaite:

Geraldo Rivera isn't the only one throwing the Fox News spin on this tragedy. Todd Starnes took no time tweeting blame at the president:

Next time try waiting until at least some of the facts are known, guys.

"I was just sent a Mediaite article with these tweets on it. I don’t know Todd Starnes (he works in NYC), but I do know he works at Fox News Channel and so do I. I don’t like his tweets. They are very bad taste. This is not the time to be snarky or have some pathetic attempt at humor. Let me repeat… 295 people died."