When Republicans do something, they sell it big time. With the left tentative on the ACA, here's what's at stake 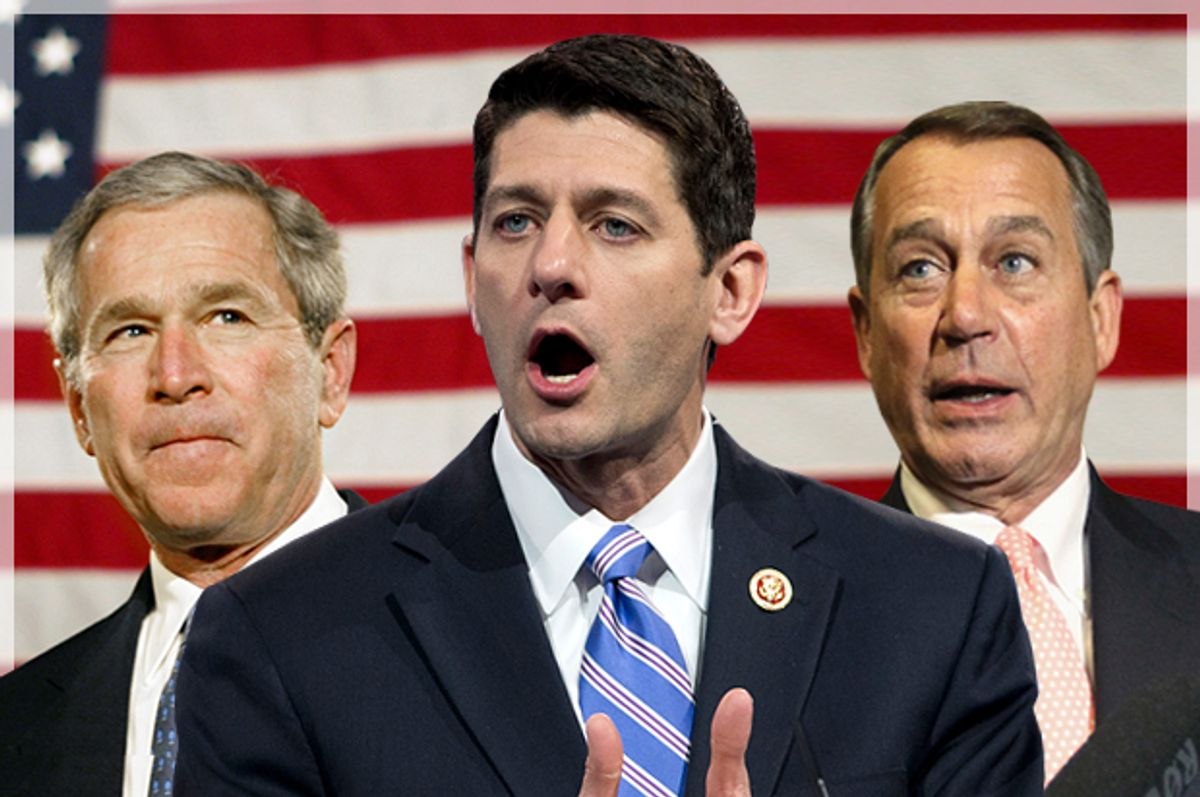 One of President George W. Bush's first moves in office was the fulfillment of his campaign pledge to cut taxes. You'll recall that he had proclaimed, "It's your money, you paid for it" and "a tax cut is really one of the anecdotes to coming out of an economic illness." And he meant it. All Republicans believe that tax cuts are the answer to every problem. Recession? Yes, that makes sense. Boom? Absolutely, it's your money! High unemployment? Why are you asking? Of course. Low unemployment? It's your money! And around and around it goes.

Back in 2000, even though President Bush was elected to the presidency by a single vote on the Supreme Court, there was no appetite among Democrats for the kind of battle such an outcome would have produced among Republicans and they eagerly signed on to the new president's agenda. Those tax cuts were immediately enacted on a bipartisan basis with the only slight modification being the "sunset" several years out so that the president didn't have to answer for the explosive deficit projections his tax cuts would cause down the road. (If you've followed the last few years of budget deals you know exactly what a land mine that turned out to be.) It was very kind of the Democrats to be so generous to a man who had stolen the presidency through the help of his own brother and a partisan Supreme Court, but help him they did.

But it's what he did next that is so instructive to our politics today. George W. Bush not only got these tax cuts passed, he spent tens of millions in taxpayer money taking credit for it. As the longtime columnist for the Baltimore Sun Jules Whitcover memorably put it:

Some 91.6 million taxpayers will soon get the letter, which says:

"We are pleased to inform you that the United States Congress passed and President George W. Bush signed into law the Economic Growth and Tax Relief Reconciliation Act of 2001, which provides for long-term tax relief for all Americans who pay income taxes."

"You will be receiving a check," it tells you. And what's even better, it says, "You need to take no additional steps. You will not be required to report the amount as taxable income on your federal tax return." In other words, the letter is a bit of a spoil-sport. Now the check won't come as a surprise even to those citizens who have already figured out whether to buy a new Lexus or Jaguar with the $300 to $600 or just pay off the mortgage on their house.

The letter will inform taxpayers how much they can expect, which should help them decide well in advance what to do with the check when it does arrive. Rather than an IRS initiative, IRS spokesman Terry Lemons says, Congress' conference report on the tax bill called on the agency to send the letter first, then the check.

In a further demonstration of concern, the IRS will also send out a separate letter to folks who won't be getting a refund, for a total of about 120 million letters at a cost, Mr. Lemons estimates, of about $20 million. Paid for, of course, by you taxpayers. So you might say you're paying for the mailing yourself. The no-refund letter will explain why you're not getting one, and how maybe you might qualify next year, if you pay taxes this year.

If there is one thing the Republicans understand it's that when you are in charge of the government and you do something for the people, you make sure you get the credit. (And yes, the foolish Democrats signed on ...) Even more important, they recognize the importance of ensuring that their policies are sold in such a way that they benefit their political agenda as a whole.

That was one of the more minor examples. They also, among other things,  promoted a "unitary executive" theory, going so far as to try to name the vice president's office as a functional fourth branch of government with its own set of authorities. And in the most blatant example of a misuse of executive power they even got caught trying to use the Department of Justice to influence electoral outcomes through their U.S. attorneys. Let's just say they weren't shy about using their power while in office to advance the long-term political goals of the Republican Party. The extent to which their attempts were successful will be left to the historians. And all of this stemmed from a conservative commitment to a long-term agenda even if it did not offer immediate returns.

Democrats used to do this too. As Rick Perlstein pointed out in his book "The Stock Ticker and the Super Jumbo," for many decades liberalism operated with a rather simple formulation of "freedom plus groceries" and the Democratic Party was the party that connected that simple human desire to a policy agenda. Unfortunately, after the tumultuous '60s, the party lost its vision and settled on a tepid strategy of chasing public opinion and trying to shape their policies around the edges instead of leading the way.

The candidacy of Barack Obama broke with that in some respects by promoting a big and hopeful vision of a nation breaking with its past social limits.  But the necessary connection with policy has been somewhat less obvious. With one exception: Obamacare. In one of the more bold strategic moves it made along these lines, the administration decided to stop fighting the derisive term "Obamacare" and embrace it. Yes, the right would continue to demonize the program but by stopping the (completely useless) campaign to call it the anodyne "ACA" or "Affordable Care Act" they took some of the sting out of it. In the end, if this program manages to survive over time, the president's signature program (and legacy) will be enshrined with his name. Even FDR didn't accomplish that one.

On a national basis the the president has also touted the program in public appearances and Democrats have defended it against the onslaught of criticism. Unfortunately, the follow-through down the line has not been good and the name alone has successfully been turned into an disadvantage even among those who are benefiting from the program. This Politico story out of North Carolina tells the sad tale. The state has covered a lot of people and most of them are pretty happy with it. But Kay Hagan the Democratic senator is getting hammered for voting for it anyway and "Obamacare" remains deeply unpopular, even among those who are now covered. Why would that be?

One major reason that enrollment is not translating to a political boost — at least not yet — is that the groups that worked to sign people up, such as Enroll America, made a decision to keep insurance coverage as far from politics and “Obamacare” as possible. They kept the conversation focused on the value of health insurance, the ban on denials for pre-existing conditions and the tax subsidies available to make coverage more affordable.

While that helped the administration reach the pivotal 8 million point, many of the newly covered don’t associate their own insurance status with Obamacare — or at least not the political debate around the law, a phenomenon that Mike Perry, a partner at PerryUndem, called a “split personality.”

“You see the disconnect of the personal benefit to them and changing their thinking around the law,” he said of the focus groups he’s done with Obamacare enrollees. They view the two issues on different planes. The insurance, he said, “is a personal thing. It is personally benefiting them and it has nothing to do with the law that they don’t understand.”

Once again the Democrats, afraid of being associated with something unpopular, distanced themselves from their own accomplishments rather than seeing the long-term advantage in being the party that brought people "freedom plus groceries." In this case that would be the liberty afforded to every individual when they are able to move to change jobs, start a business or otherwise operate as free individuals without fear of losing their health insurance -- and "groceries" meaning a government that delivers a bit of financial security in an increasingly unstable economic environment.

But no Democratic good deed will go unpunished by Republicans if the Democrats fail to make people aware that they are responsible for it. If the Democrats fail to use their power to make voters aware that they are responsible for the betterment of their lives when they have the chance, the other side certainly will not make it for them. It's pretty easy to think there's a difference between "policy" and "politics" but the truth is that you can't have one without the other.