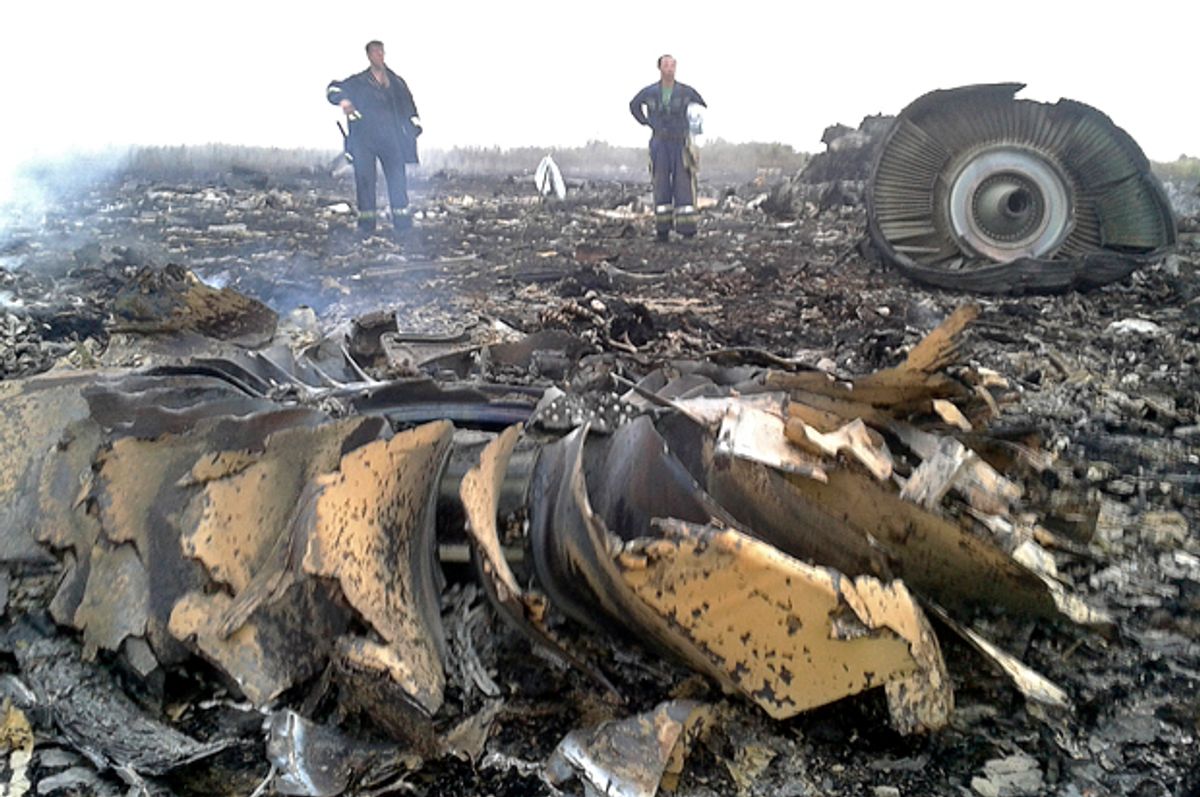 Emergencies Ministry members work at the site of a Malaysia Airlines Boeing 777 plane crash in the settlement of Grabovo in the Donetsk region, July 17, 2014. (Reuters/Maxim Zmeyev)
--

An airplane operated by Malaysia Airlines was reportedly shot down near the Russian border in eastern Ukraine on Thursday, killing 295 people, according to an Interfax report. Ukraine's Interior Ministry confirmed the disaster.

Anton Gerashenko, an adviser to Ukraine's Interior Minister, said on his Facebook page the plane was flying at an altitude of 10,000 meters (33,000 feet) when it was hit by a missile fired from a Buk launcher. A similar launcher was seen by Associated Press journalists near the eastern Ukrainian town of Snizhne earlier Thursday.

Malaysia Airlines said on its Twitter feed that it "has lost contact of MH17 from Amsterdam. The last known position was over Ukrainian airspace."

Malaysia Airlines confirmed an "incident" aboard the plane prior to the crash, according to Sky News.

The Malaysian Defense Minister, however, took to Twitter stating that it is not yet confirmed that the plane has been shot down. He tweeted:

More from the AP:

The region has seen severe fighting between Ukrainian forces and pro-Russia separatist rebels in recent days.

On Wednesday evening, a Ukrainian fighter jet was shot down by an air-to-air missile from a Russian plane, Ukrainian authorities said Thursday, adding to what Kiev says is mounting evidence that Moscow is directly supporting the separatist insurgents in eastern Ukraine. Security Council spokesman Andrei Lysenko said the pilot of the Sukhoi-25 jet hit by the air-to-air missile was forced to bail after his jet was shot down.

Pro-Russia rebels, meanwhile, claimed responsibility for strikes Wednesday on two Ukrainian Sukhoi-25 jets. The Ukrainian Defense Ministry said the second jet was hit by a portable surface-to-air missile, but added the pilot was unscathed and managed to land his plane safely

Moscow denies Western charges that is supporting the separatists or sowing unrest in its neighbor. The Russian Defense Ministry couldn't be reached for comment Thursday about the Ukrainian jet and Russia's foreign ministry didn't respond to multiple requests for comment.

Earlier this week, Ukraine said a military transport plane was shot down Monday by a missile fired from Russian territory.

The rebels are known to possess portable anti-aircraft rocket launchers, but Ukrainian officials say that kind of weapon would have been unable to reach Monday's plane at the altitude at which it was flying Monday. Aviation experts, however, have questioned whether the stricken transport plane was flying at the altitude Ukrainian officials had claimed.

A Reuters correspondent is reportedly on the ground near the incident:

"Interfax news agency has quoted leaders of the self-declared Donetsk people's republic denying that the rebels shot down the Malaysian airlines plane. A reported member of the republic's security council said the rebels only have weapons able to shoot down a plane at 3,000 metres and blamed Ukrainian military forces for the attack. (The plane was reportedly flying at 10,000 metres).

"But officials from Ukraine's defence ministry and national security council said the rebels have Buk surface-to-air missiles able to shoot down planes at such elevations and suggested one was used in the attack.

"President Petro Poroshenko called for the creation of a commission to investigate the accident. 'This is the third tragic incident in recent days after Ukrainian military An-26 and Su-25 jets were shot down from Russian territory. We don't rule out that this plane was also shot down, and we stress that the Ukrainian military didn't take any actions to destroy targets in the air,' he said."

Ukrainian President Petro Poroshenko denies any Ukrainian military involvement, according to the The Guardian. Both he and the Malaysian prime minister have called for an investigation.

Reuters correspondent writes about the wreckage:

"Dozens of bodies were scattered around the smouldering wreckage of a passenger jet that crashed in eastern Ukraine on Thursday, a Reuters reporter said.

"An emergency services rescue worker said at least 100 bodies had so far been found at the scene, near the village of Grabovo, and that debris from the wreckage was scattered across an area up to about 15km (nine miles) in diameter.

"Broken pieces of the wings were marked with blue and red paint – the same colours as the emblem of the Malaysian airline which lost track of a flight from Amsterdam to Kuala Lumpur that was carrying almost 300 people."

According to MSNBC, the White House is confirming this report.

State Department spokesperson Jen Psaki spoke to reporters. She could not confirm if there were U.S. citizens on board. Here is a segment from that press conference:

"We have seen the same reports you have at this point. We don't have any confirmed about casualties or details. We're closely monitoring the situation. We're seeking additional information and are in close contact with Ukrainian authorities.

"We don't have any additional details at this point about any American citizens. We're of course looking for more information … and we will make [information] available as soon as we have it.

"I don't want to speculate on who's to blame or the causes – we don't have the information at this point."

THIS IS A BREAKING NEWS STORY. PLEASE CHECK BACK LATER FOR UPDATES.