My nightclub horror story: The eternal humiliation of getting into America's "hottest" clubs

A nightclub promoter recently told a woman: "No whales or hippos" allowed. Business as usual 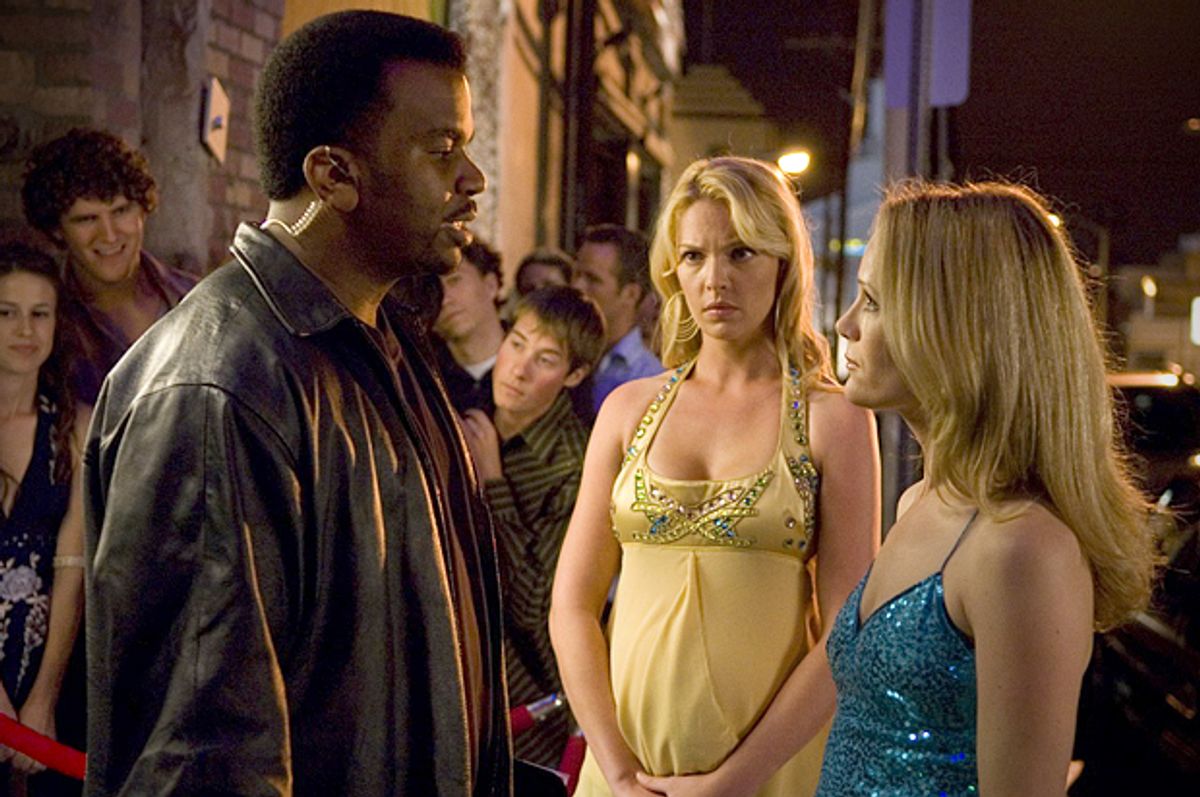 Craig Robinson, Katherine Heigl and Leslie Mann in "Knocked Up"
--

A few months ago I spent a night at The Standard with friends. Dinner in the Meatpacking. Drinks. Dressed in our cutest black outfits. And then my friends wanted to go dancing at the painfully hip rooftop nightclub. I’m in my early 40s now, with two kids, so this seemed like an insane idea to me. But off we went.

We told the enormous bouncer we were staying at the hotel. He told us to wait. “There’s a private party up there,” he said.  We watched a few leggy girls breeze in. Then the bouncer carded us all, but one friend didn’t have her ID. “I can’t let you in,” he said. “It’s a liability.” We all laughed. “I’m 43,” she said. “Look at the wrinkles,” she said pointing to her crow’s feet.

After arguing with the bouncer and mercilessly begging, we were graced with entry. The club was filled with robot clones. No, not real robots, but rail-thin women teetering around with martini glasses. We waved at the bartender and she rolled her eyes. “The moms are here!”

I wanted to scream — bad music, mean bouncers, enclosed space, too many knock-off Kardashians. But instead, I fled.

Such is the eternal humiliation of gaining access to America's "hottest" nightclubs as anything other than a twentysomething lingerie model — usefully highlighted in a recent Jezebel post about the club promoter who told a woman that he needed photos of all members of her bachelorette party. "No whales or hippos allowed," he explained.

Manhattan’s 1 Oak recently gave some tips on club entry to Allure (via Buzzfeed): “At 1 Oak, membership comes in the form of an incredibly short dress and high heels, lots of eye shadow, and hair — blonde, brunette, straight, wavy, whatever — that is long and very much on display."

So what else does it take to get into 1 Oak?

1. Reveal the body—but not too much cleavage.

2. Don’t fall in your shoes in front of the doormen, ladies.

4. Wear too much makeup.

5. Know that you’ll be objectified and revel in it. Whoot!

Writes Allure: “Just to be clear: You’re pretty low on the food chain. ‘Decorations,’ ‘kindling,’ ‘buffers,’ — these are the terms for pretty girls who make the rich table clients feel as if they’re not alone, like some losers in the club.”

I was an avid club-goer at 18 and 19, and my dress code was nothing special: a pair of vintage Levi’s that I got from the Salvation Army, a tank top and my Doc Martens. My hair was too curly and my makeup scarce except for a hint of black eyeliner. My friend wore giant tutus. We were even asked to dance onstage and in a giant cage in the middle of the crowd, which we happily did. This was the club culture of the '80s and '90s: alternative and wild and weird. I never thought I'd look back on dancing in a cage as "the good old days."