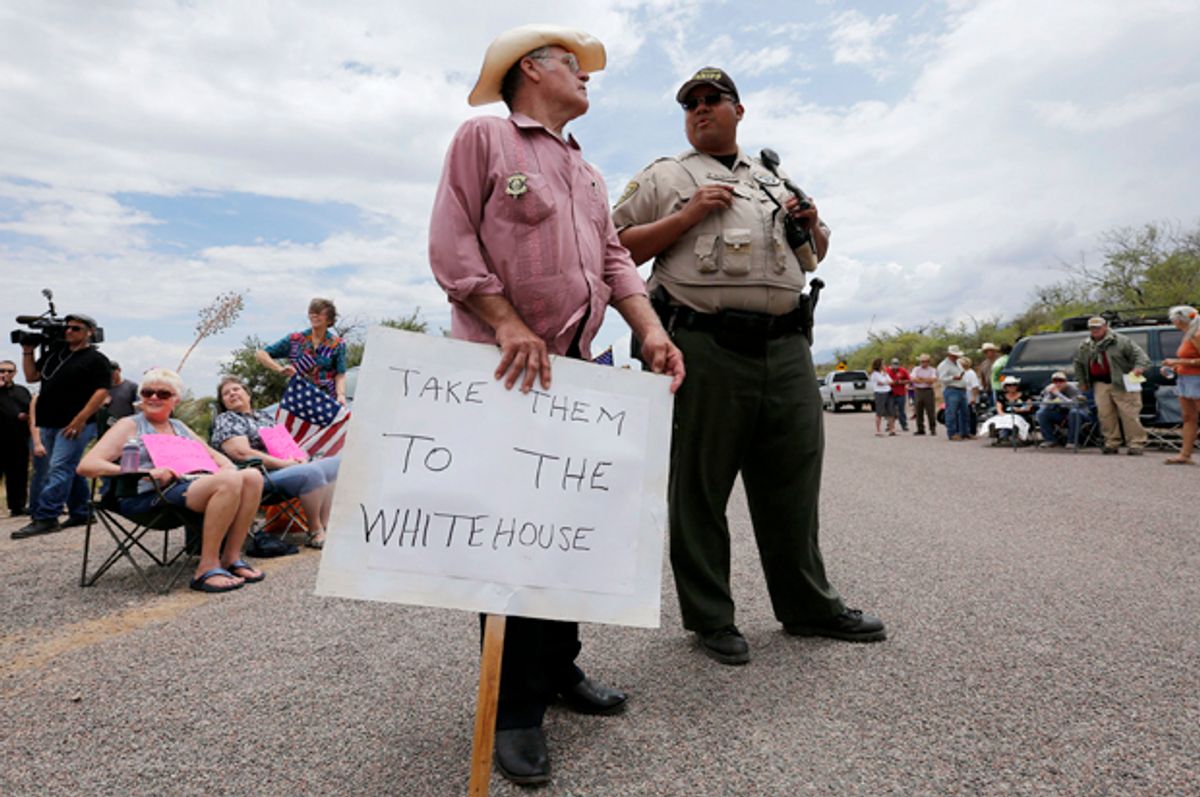 The anti-immigration forces who mistakenly detained a school bus full of local YMCA kids on Tuesday have declared victory in Oracle, Ariz., insisting their militia-backed protest against plans to house immigrant children at a juvenile detention center worked, and the Central Americans won’t be placed there.

Santilli linked to a story on the pro-gun, anti-immigrant 21st Century Wire, which is widely being sourced for the news. “Spread the word American defenders have won again in Oracle,” crows the Web site of ALI-Pac, which opposes immigration reform.

That comes on the heels of successful intimidation in Murrieta, Calif. two weeks ago, and reports that other shelter plans have been reversed, from Maryland to Massachusetts.

So what really happened in Oracle? All that’s known for sure is that no young people have arrived yet. A Department of Homeland Security source told NBC News late Tuesday that "there were never any plans for unaccompanied children to travel to Oracle today." Local congressman Raul Grijalva also told reporters that his office had been notified no buses would arrive that same day.

But some news reports translated to Grijalva saying the buses weren’t coming “as previously scheduled Tuesday,” which seems to be what led right-wing protesters to declare victory. In fact, the congressman said nothing about whether the buses had been “scheduled” to arrive, or whether they would arrive another day.

“The only part our office knew for sure is that kids would not be coming on Tuesday … whether or not they come in the future has not been relayed to us,” Grijalva press aide Dan Lindner told me.

On Thursday morning the local fire chief told reporters for Tucson News Now that he was asked to do a safety inspection of Sycamore Canyon Ranch, where the young men are supposed to be placed. The request to inspect the ranch came with a sense of “urgency,” says Fire Chief Larry Southard. "It passed." He believes the ranch will house about 50 boys “14 to 17 years old.” Management at Sycamore Canyon Ranch, run by the Nevada non-profit Rite of Passage, has also told reporters it was asked to house the young men.

The plan was leaked to anti-immigrant activists by right-wing Pinal County Sheriff Paul Babeu, who shared it at an NRA women’s luncheon. “I choked,” 85-year-old Air Force veteran Robert Skiba told Breitbart News.  He assured Babeu: “We will take care of this.”

So dozens of protesters blocked the local road to the ranch on Tuesday, some waving American flags, others the Tea Party’s favorite Gadsden flags. They were joined by the wingnut-backed Arizona State Militia. Their big accomplishment, famously, was mistaking a bus full of local kids from a YMCA for the immigrant caravan, stopping it briefly, and sending it on their way.

That’s how Tea Party congressional candidate Adam Kwasman, a GOP state legislator, got in trouble for claiming he’d witnessed his comrades stop a busload of immigrant kids, when in fact he was talking about the YMCA bus.

"I was able to actually see some of the children on the buses, and the fear on their faces. This is not compassion," Kwasman told reporters.

KPNX’s Brahm Resnik responded, "You know that was a bus with YMCA kids?"

Kwasman shot back, "They were sad too." In fact, reporters said the kids appeared amused by the colorful protest. But whatever: the goal was to make them “sad” and fearful.

The mixed signals on Oracle may well be deliberate, intended to throw off the protesters who want to turn the buses around as they did in Murrieta. It would be a shame if the victory they’ve prematurely declared turned out to be real. We’ll keep you posted.