Todd Akin: I only said "legitimate rape" because it's an abbreviation and I'm a busy guy!

Major scoop: "'Legitimate rape' is a law enforcement term, and it's an abbreviation for 'legitimate case of rape'" 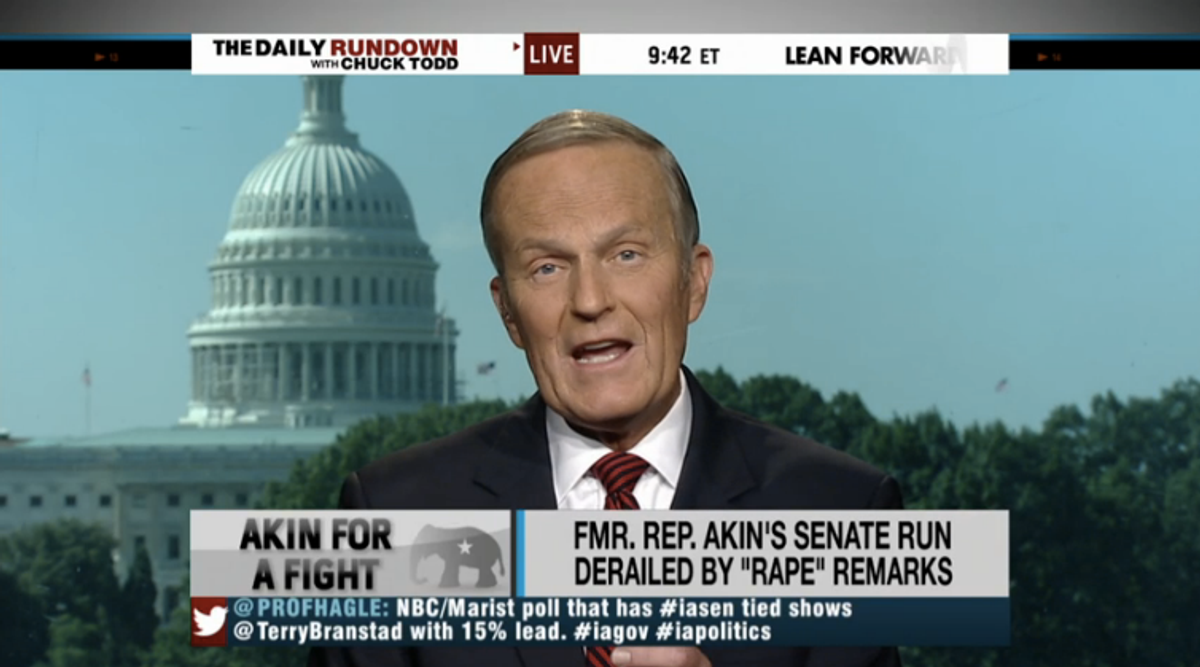 Sometimes there aren't enough hours in the day, am I right? Who hasn't used shorthand like texting "OMW" instead of "on my way" to make time to take care of other important business, like refreshing your Instagram feed every 45 seconds or carefully reading the labels on your supermarket's selection of so-called natural peanut butter brands just to confirm that they are all basically the same so you can just go ahead and buy the cheapest one. Todd Akin, the former Missouri lawmaker who killed his political career with his 2012 comments about sexual assault, understands the importance of small timesavers. Which is why he said "legitimate rape" in the first place.

"'Legitimate rape' is a law enforcement term, and it's an abbreviation for 'legitimate case of rape,'" he told MSNBC's Chuck Todd Thursday morning.

And so why did he say it again? "Because of the fact that it's an abbreviation," he clarified. And because he is super tight with cops and uses law enforcement lingo like his super tight cop friends. "It's a law enforcement term. [...] Before any of the facts are in, they call it a 'legitimate case of rape.' That's what they call it. But they use the word just 'legitimate rape.'"

See, everyone? He was just busy and using cool code language. Everything changes once you take into consideration the full term, "Legitimate case of rape."

Let's insert his updated language into his original comments to see how much clearer and better it all becomes:

Well you know, people always want to try to make that as one of those things, well how do you, how do you slice this particularly tough sort of ethical question. First of all, from what I understand from doctors, that's really rare. If it's a legitimate case of rape, the female body has ways to try to shut that whole thing down. But let's assume that maybe that didn't work or something. I think there should be some punishment, but the punishment ought to be on the rapist and not attacking the child.

With the help of those two extra words, we now understand Akin's true meaning. As long as it is a legitimate case of rape the victim's reproductive system will vanquish the offending legitimate case of rape sperm and "shut that whole thing down," thus removing the need for rape exceptions in punitive measures restricting all access to abortion care, which is ostensibly a constitutionally protected right that pregnant people in this country have. (Weirdly, even though Akin does not think that children conceived as a result of rape really exist -- since they should have been "shut down," or something -- he said he had many of these children working on his 2012 campaign.)

And as for those women whose bodies don't "shut that whole thing down?" They still shouldn't be able to have a say about whether or not they carry that pregnancy. "Should the child conceived in rape have the same right to life as a child conceived in love?" Akin asked, repeating his point twice for emphasis.

But as Akin sadly notes, this kind of gross mischaracterization and context-free character assassination is "something that's done all the time in politics."