The truth about Rupert Murdoch's new plot for world domination 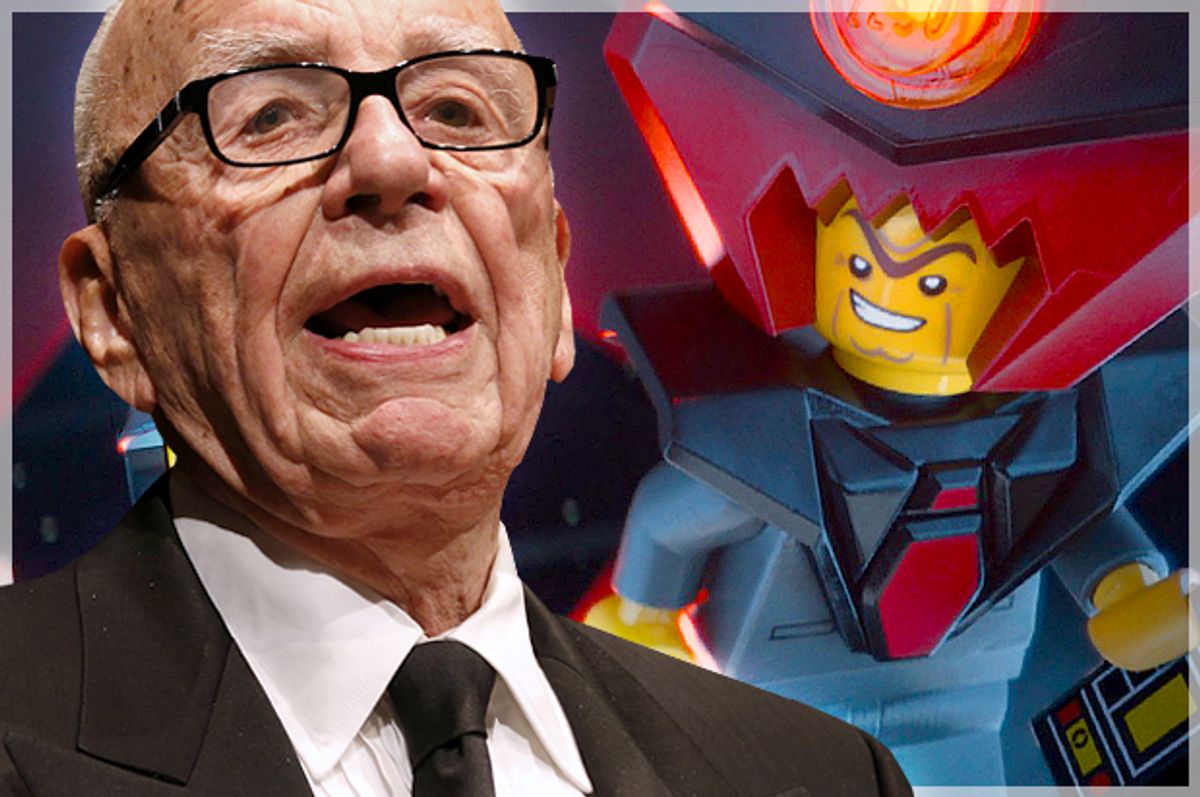 Talk about your missed branding opportunities! Jeff Bewkes, the CEO of Time Warner (the media conglomerate, not the cable company), recorded a video on Wednesday designed to reassure employees made jittery by the news, reported earlier in the day by multiple outlets, that Time Warner had rebuffed an $80 billion buyout offer from Rupert Murdoch and 21st Century Fox. At the very beginning of the video, there is a brief montage of some of Time Warner's most famous media properties, including one of the characters from the smash hit "The Lego Movie," the female protagonist Wyldstyle (voiced by Elizabeth Banks).

Obviously, a far better choice for featuring, up front and center, would have been the malevolent Lord Business, the mad homicidal tycoon who enjoys absolute power over all the denizens of the Lego universe. There's a clear resemblance between Rupert Murdoch and Lord Business, a point immediately discerned by the sharp journalists at Fox News, who decried the film's anti-capitalist demonization of business. If Bewkes really wanted to emphasize his flat declaration that there was no offer Fox could make that Time Warner would accept, he should have illustrated it with the downfall of Lord Business. A movie studio sharp enough to make "The Lego Movie" shouldn't have blown this chance.

But jokes aside, it's always worth taking seriously when one of the biggest and most culturally influential media conglomerates  in the English-speaking world threatens to buy another of the biggest and most culturally influential media conglomerates. Although the New York Times was quick to note that CNN surely would not end up part of the deal, thus averting the catastrophe of Fox News swallowing up one of its chief competitors, there's still a lot left to chew on. Business Insider speculated that the deal was all about Rupert Murdoch getting his hands on HBO. Or maybe it was about nabbing the NBA and MLB television rights currently owned by TNT and TBS.

Or maybe it's just all about fending off the mighty, and growing power, of Comcast.

At Bloomberg View, Susan Crawford, a former Obama administration staffer and author of "Captive Audience: The Telecom Industry and Monopoly Power in the New Gilded Age," makes a compelling case that both Rupert Murdoch and Jeff Bewkes are well aware that their future health and prosperity requires getting bigger -- simply to be able to sit across the negotiating table with Comcast as equals.

Murdoch's plan makes sense, and Jeffrey Bewkes, Time Warner's whip-smart chief executive officer, will eventually find a partner. Why? Because even very powerful programmers such as Time Warner need increased heft to deal with the ever-more-concentrated U.S. distribution market. To control their own destiny, to ensure that they're able to reach viewers on their own terms (rather than paying unlimited tribute to ComcastTimeWarnerCable), programmers will need all the firepower they can muster. That means having as much sports and high-value content as possible on their side of the table. In turn, that means getting bigger.

The ongoing consolidation of media content and distribution markets in the U.S. is nothing short of astonishing, as described by Crawford. In 1983, 50 companies ran 90 percent of American media; today, just five mega-entities control 90 percent of what we read, watch and listen to," she writes.

After Comcast completes its merger with Time Warner (the cable company not the media conglomerate), Comcast, writes Crawford, will dominate the market for high-speed broadband access.

That means the programmers -- even though they're giant companies with gigantic quantities of high-value video -- won't have competing distribution outlets to play against one another in negotiations. In order to reach most Americans, they'll have to deal with Comcast. That means they have to make sure that Comcast needs them more than they need Comcast.

Susan Crawford doesn't mention the words "net neutrality" in this piece, but we can connect the dots. If media conglomerates as massive as Time Warner and Fox need to get bigger to combat the power of Comcast, what do you suppose that means for the much smaller Web-based services that will be fighting for the necessary bandwidth to survive?

Meet the real Lord Business. His name is Comcast.