I was scared of the great writer for too long, as young writers often are. But she was ruthlessly honest, and warm 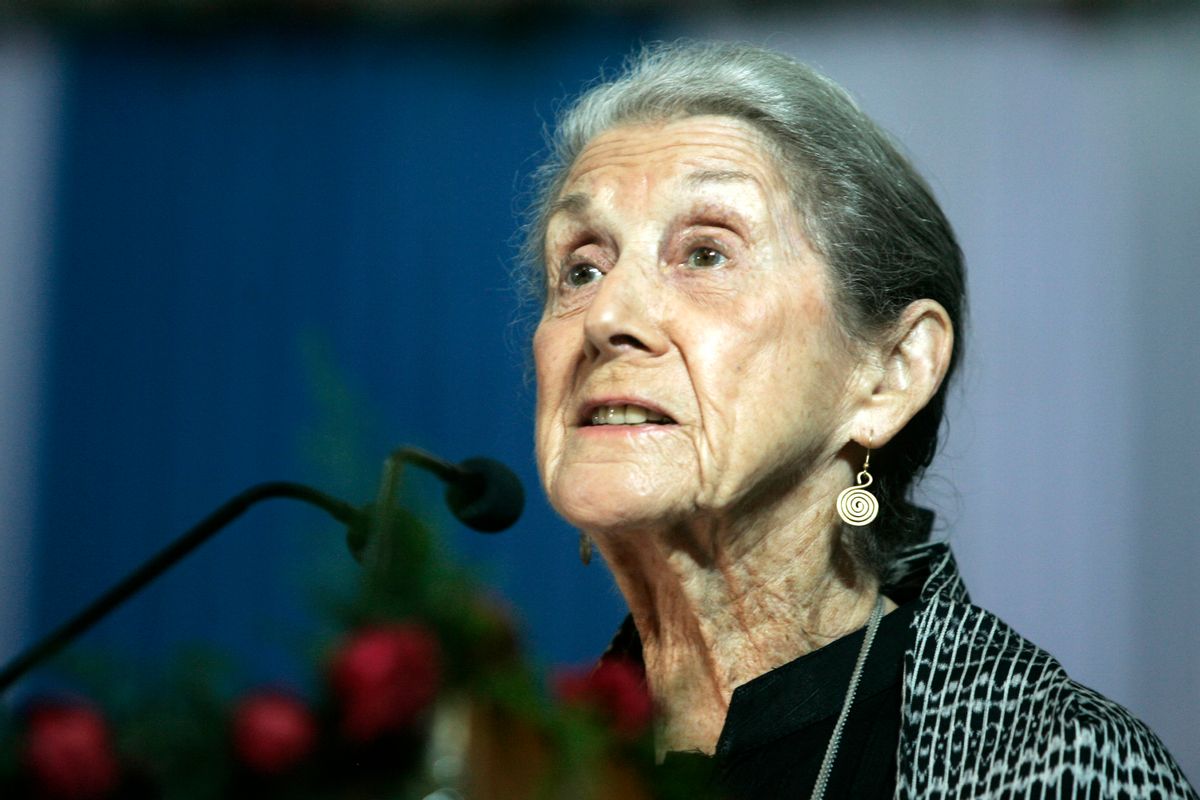 I remember her voice — clear, acerbic, assured. I must have been six or seven years old, scurrying around the lunch or dinner table. Johannesburg, early '70s. I remember her bearing and keen gaze, her straight posture and straight talk. Nadine Gordimer chose her words carefully, and when she spoke people listened. The voice, the accent, told her story: arid gold mining town, Lithuanian watchmaker father, English mother. An outsider — Jewish, the child of foreign parents, female — she was educated by a tutor, read and wrote compulsively and published her first short story at the age of fifteen.

When I was in college in America, I began an intermittent epistolary relationship with Nadine, first about her writing and then about mine. I was probably the only freshman in my literature class who thought of her novel "My Son’s Story" when I read “The Tempest,” so I wrote to tell her so. (Caliban: “You taught me language; and my profit on't. Is, I know how to curse.”) I screwed up my courage and sent the first short story of mine that I thought worthy of her time, and she wrote back that it perfectly captured the gap between “privilege and privation” in South Africa. That letter sent me back to my Apple LC in a happy hurry. Another story, an attempt at frugal prose and a setting further afield, elicited a succinct reply: don’t try to be a Japanese writer. We met in New York; we met in Johannesburg. Every time I wrote to her, she wrote back, a letter typed on a manual typewriter that left divots in the thin airmail parchment. When my novel was published in South Africa last year, she wrote a blurb (shout, they call them there) that made me jump for joy.

Are there many writers who fight for a cause, chronicle that cause and eventually outlive that cause? Nadine was that writer; she spans the Struggle. Her 1963 work, "Occasion for Loving," is about a white woman who has a relationship with a black man, something that was illegal at the time, banned by the Immorality Act. "Burger’s Daughter," published in 1979, is a fictionalized account of an anti-apartheid activist and his daughter, based in part on her friend and ANC comrade Bram Fischer. The book was banned in her homeland, but a lot of South Africans read it, and a copy was smuggled to Nelson Mandela on Robben Island.

"July’s People"  (1981) imagines the end of apartheid and penetrates the feeling of futurelessness that permeated South Africa at the time. She chose for the epigraph a line from Antonio Gramsci: “The old is dying and the new cannot be born; in this interregnum there arises a great diversity of morbid symptoms.” "The House Gun" (1998), "The Pickup" (2001) and "No Time Like the Present" (2012) are about people living in post-apartheid South Africa. She sees the world through each of her characters’ eyes, and the result is writing that is taut and true.

Nadine Gordimer wrote against apartheid and also protested, attended rallies, testified in court, harbored ANC leaders in her home and, more recently, helped to raise money for HIV/AIDS prevention and care. Along the way, she raised two children, had a long and loving relationship with husband Reinhold Cassirer and was awarded the Nobel Prize in 1991.

I saw her in March of last year, invited to her house at precisely quarter past six. We drank whiskey and ate potato chips, and I got the feeling that she wrote every day, and drank whiskey and ate potato chips every evening. At eighty-nine years old, she was thin but beautiful, elegant, graceful, still fierce, still enthusiastic. I had been interviewed earlier in the day and the interviewer had surprised me by suggesting it was no longer popular to write books about the Struggle against apartheid. And what did you tell him, she asked. “I told him that’s bullshit.” “Quite right,” she said. “That’s just rubbish.”

I wish I’d written to her more, seen her more. I was scared of Nadine for much of my adult life, as young writers in awe of older writers probably often are. Wrongly, as it turned out. She was a friend and a champion. She wasn’t easy. Far from it, she was ruthlessly honest and tough, but she was warm and generous too.

At the end of the day, armed with a Scotch and a bag of crisps, Nadine would, I’m sure, like to be remembered as what she was: a writer. She was a political writer by nurture, not nature. “I don’t suppose, if I had lived elsewhere, my writing would have reflected politics much, if at all.” Her short stories may be her finest literary achievements. Potent as a Chekhov short, but born of veld and fire, not snow and samovars, many are focused personal tales, free from overt political context. From early stories that capture the lives of South Africans of all strata to the later, powerful stuff of "Jump," a dazzlingly wide-ranging collection, her eye is sharp, her prose crisp. She looked unflinchingly at the heart of apartheid — and at the souls of her characters. She described "The House Gun" in a Salon interview as a novel about “intimate human relations and how we know each other.” And that was her broad compassionate literary canvas: how we love, how we fight, how politics and people and life change us, how we evolve.

She writes in her 1995 novel, "None to Accompany Me": “Everyone ends up moving alone towards the self.” I hope she didn’t feel alone. I know she will always accompany me.