NYC's tabloids may not like it, but here's why it's good that their mayor and his family are getting out of Dodge 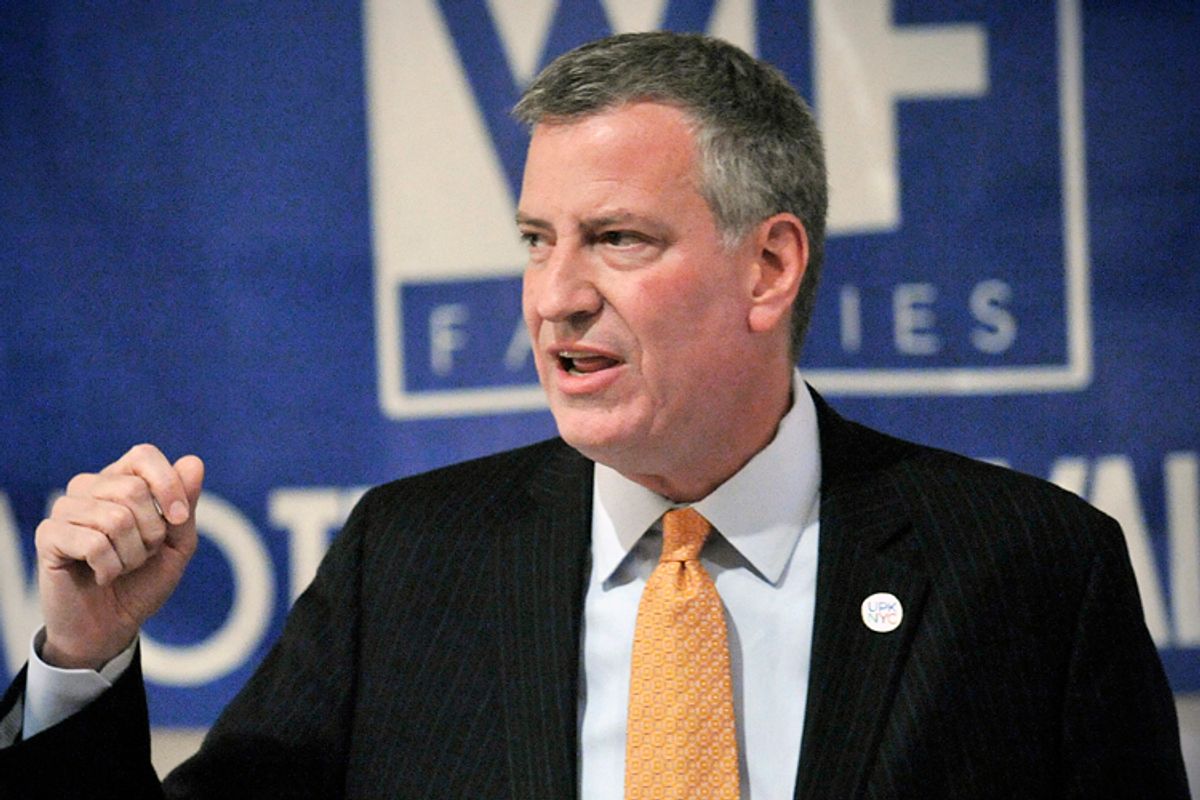 There's been a debate happening in New York City for the past week about whether or not Mayor Bill de Blasio should be taking a 10-day vacation to Italy with his family. Among the objections cited were that the mayor is relatively new to his post (he's six months in), the length of the trip (10 days is more than his predecessors have taken), the destination (Italy is an 8-9 hour flight from New York) and the fact that he could have been leaving as a possible Long Island Railroad strike loomed (yesterday, a tentative deal was reached between the union and Metropolitan Transit Authority, likely rendering this last point moot).

But while the debate has stoked plenty of controversy and grandstanding from jerks, it has not instigated any real conversation about the issue at its core: Most Americans don't use their vacation days, and most men aren't encouraged to prioritize time with family over work. Through the simple act of going on vacation with his wife and kids, de Blasio is bucking both of those trends. And both of those are trends badly in need of bucking.

While the city's tabloids have had a lot of fun ribbing the mayor for going away for too long, too soon, to too fancy a locale, I wonder if the de Blasio vacation debate might serve to encourage others -- and maybe even especially dads -- to think about their own work-life balance. Like I said before, most Americans don't use their vacation time. According to a survey of 2,300 workers -- men and women fortunate enough to receive paid time off, a basic benefit which is already a given in most developed countries -- only 51 percent use it. And the reason? Many are scared that missing work will compromise their job or professional reputation in some way. De Blasio has decided to take a vacation with his family, no matter what the optics. Hopefully, others might take notice and follow suit.

Scott Dobroski, a career trends analyst behind a survey on American workers and time off, told the Wall Street Journal that workers were most likely to say that "fear" was the reason why they don't use their time off. Nearly 30 percent said they were scared of falling behind at work; almost 20 percent said they were worried that leaving would get them fired and 19 percent were hoping for a promotion and thought taking time off would reflect poorly on them.

It's sad that we're in a place where taking time off -- time that is part of your compensation package -- is considered scandalous. As was made clear in a recent study on men and paternity leave, when one person uses a work leave benefit, others are likely to do the same. It's positive peer pressure, and it can go a long way to have people in high-profile positions -- like de Blasio -- set the example that it's OK to take time off. Even if it's just to futz around Italy with your family.

And about that family. Women continue to shoulder a majority of caregiving responsibilities and housework in the United States. And they are the ones who are asked about "having it all" and their work-life balance, while men are rarely compelled to make the same choices or account for their time in the same way. That said, men -- like women -- report wanting to spend more time with their families. And men -- like women -- who take the time to do that can often be penalized at work.

Correcting this is obviously a matter of policy; the United States needs to catch up with the rest of the world and implement guaranteed family leave, paid sick days, paid vacation days and other basic protections for workers. But reducing the stigma all people face when they take time off, including dads like de Blasio, is really important, too. It's good that he's prioritizing spending time with his wife and kids eating pizza and looking at old buildings. It would be good if more families had support to do the same.

Not everyone who gets vacation time is able to afford to tour Italy for 10 days. Some men -- and women, obviously -- use that time to catch up with their kids, take local trips to see friends and family or just not work. All of those things are good ways to spend vacation time, if only we all actually had it, and then had the freedom to actually use it.