Reality stars now date and house-hunt in the buff. How did reality TV drift this far from real life? 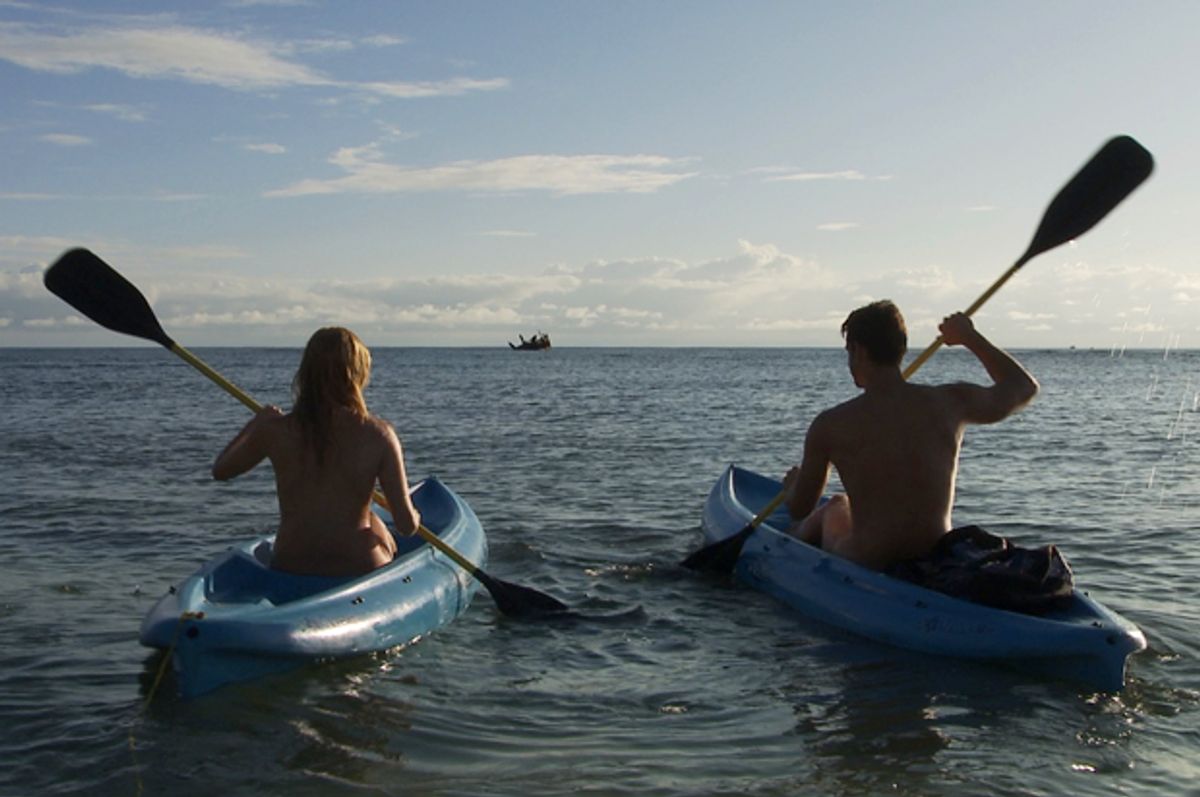 At this point, reality-show producers have pretty much tried every trick in the book. Dating, real estate, cooking competitions, backwoods survival -- after a certain point, there's nothing new under the sun. New Jersey, as a setting, is home to shows as thematically varied as "The Real Housewives of New Jersey," "Cake Boss," "Jersey Couture" and any number of "Jersey Shore" spinoffs (most recently TV Guide's "The Sorrentinos"); other regions-as-genres have included Atlanta and, for a strange stretch of time, Dallas. The concept of a competition that tests an obscure or unusual skill has been stretched to its limit with shows from "Skin Wars" (about body-painting) to "Jim Henson's Creature Shop Challenge." And the dating, real estate and survival genres have all lately tried to achieve addition by subtraction -- by forcing cast members to take off their clothes.

VH1's "Dating Naked," which began last night, paradoxically gains little from its conceit -- that contestants must choose one of three suitors while they're all in the altogether. They go on adventuresome, contrived dates. There is boogie boarding. But the nudity is dispensed with so quickly that one begins to forget why this is a show at all. Mention is made, early on, to everyone's vague discomfort with the situation (no one knows where to look!), but the show takes weirdly little advantage of the fact that it could potentially strip away the rhetoric and pretension around dating shows. The nudity, indeed, turns out to be the least interesting aspect of the show.

The contestants could be frank and honest about the kind of bodily evaluation that goes into very-short-term dating, but instead still speak about "connections" and potential futures together. When contestant Wee Wee (yes) tells a date she met maybe a few hours before that she is thinking about marriage and children down the road, it feels as though the show's trying to ape the most inane aspects of "The Bachelor"; if the contestants were wearing clothes, it'd be an extremely bad copy of the old MTV after-school shows, like "Next" or "Date My Mom," that tried to cannibalize that ABC dating show's success. This show has what appears to be a fairly limited budget and a killer hook -- why doesn't it just embrace what it is? Perhaps because the contestants are so sheepish about being nude and so unwilling to discuss how, exactly, being nude affects their fledgling relationships with one another. I'd be incredibly self-conscious and would dodge the subject, too, but that's why I didn't audition for, get cast on, and take time off work to appear on, a show called "Dating Naked."

Admirably, though, the show's cast looks by and large "normal" in the manner that people at any beach would; they're not fitness models. One guy is covered in poorly chosen tattoos. There's at once a prurience to seeing, immediately, what all sorts of people look like physically, and a sort of smug satisfaction at episode's end when you realize you had forgotten these folks were naked at all! This may be the greatest achievement, such as it is, of "Dating Naked" -- being so deeply boring that it makes nudity seem normal, not shameful.

By contrast, TLC's "Buying Naked," which focuses on naturists looking for homes that meet their specifications -- that is, looking for real estate while naked -- makes being nude seem like the weirdest thing in the world. Though nudity on this show (like "Dating Naked") is blurred, shots are also often set up to jokily conceal genitals in the way that Wilson's face was hidden by fences and furniture on "Home Improvement." On "Dating Naked," the contestants only have other naked people to talk to; on "Buying Naked," the nude folks are put into conversation with a clothed real estate agent who becomes an avatar for the clothed audience.

Unlike "Dating Naked," "Buying Naked" purports to be a reflection of the way things actually work in the real world without producer interference. But even nudists -- as one woman looking for a house with a lot of closet space makes clear -- put clothes on for their dealings with the non-nudist world. It's just that when people are standing in the middle of a potential rental property naked, all of their casual requests seem inherently ludicrous. Much like "Dating Naked," a "Buying Naked" without the nakedness would be almost unwatchable, a poorly executed version of "House Hunters."

But nudity changes everything, of course. That's the point of "Naked and Afraid," the Discovery show that made a huge splash when it debuted last summer. "Naked and Afraid" drops people in the wilderness without even the clothes on their backs in the name of survivalist experiment; the nudity isn't really prurient, unless you really love human misery. It's the necessarily ratcheted-up version of what "Survivor" was supposed to be when it launched 14 years ago -- a test of human endurance.

Neither on "Dating Naked" nor on "Buying Naked" does anyone act remotely like normal naked people would. They're too busy contorting themselves so that the kitchen faucet blocks the view of their nether regions. It turns out the naked genre of reality TV is the least like reality yet.