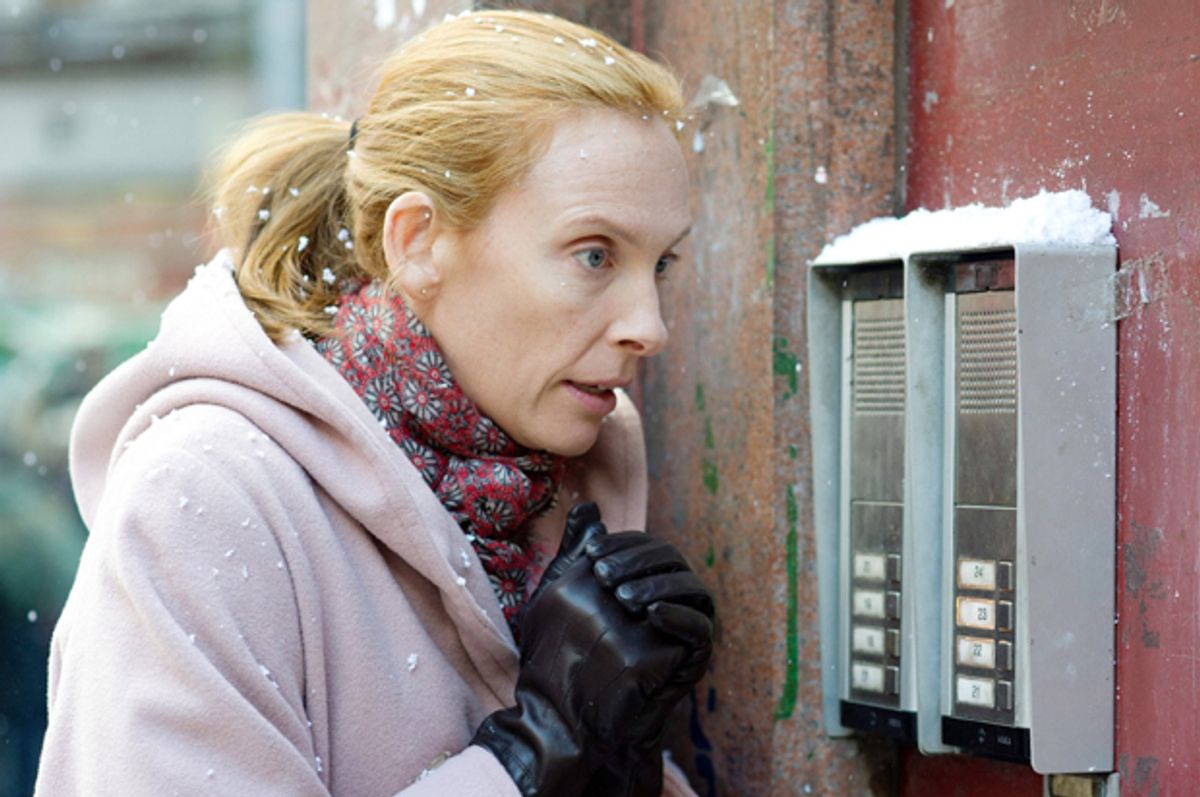 Toni Colette in "A Long Way Down" (Magnolia Pictures)
--

Toni Collette --Emmy winner for "United States of Tara" and Oscar nominee for "The Sixth Sense" -- is hitting big screens again with "A Long Way Down," an adaptation of the work of Nick Hornby, but she said that she gets recognized most often for "Muriel's Wedding," the second movie she ever made.

Not that the intervening years have been unkind to her. "A Long Way Down" is another juicy role for an actress who's long been willing to take risks; her character, Maureen, first appears in the movie hoping that a stranger will jump off a ledge to his death -- which would clear room for her to do the same. The movie becomes an exploration of why, exactly, life is worth living, told through the stories of four suicidal people, including Collette's single mother of a disabled child.

The actress clearly loves to work -- but, at an age when many of her contemporaries are finding fewer worthwhile roles, Collette is taking an active stance. "I’m starting a production company because as an actor, you’re kind of just waiting around at the mercy of other people," she told Salon. "So now I want to start producing and directing and you know, start making films from the early  stages, not just coming in as an actor."

I wanted to talk a little bit about your history with Nick Hornby. How did you find out about this project and what compelled you toward it?

I’m a fan of Nick’s writing, obviously. I just find he can kind of understand people, humanity, the way we interconnect, right? And he creates the most beautiful, realistic tomes that show something so deep and poignant, and also laugh-out-loud funny. So yeah, I feel very fortunate to have been cast in a couple of adaptations of his work. I loved working on "About a Boy." And the producers -- I worked with Finola Dwyer, who’s one of the producers on "A Long Way Down," on a mini-series about the tsunami in Thailand. And so she hadn’t read this particular book of Nick’s and she sent it to me and I just obviously loved it immediately.

Ultimately, the story is about these four lost souls who were so desperate, so lonely, kind of bumping into each other right before what could possibly have been the end, and who end up saving each other. They become these inadvertent friends... In Maureen’s case — Maureen doesn’t have a life.

It must be kind of difficult to make a movie like this that doesn’t feel as though it’s tipping over into being maudlin or overly pessimistic.

I mean, at the beginning, sure, they’re at their most desperate. But the film is ultimately very life-affirming. It’s a celebration of life. It’s about hope and it’s about connection and it’s about friendship, it’s not about suicide. It’s about moving away from one lonely sadness and reinvesting in life again. And, in my character’s case, it’s someone — someone that’s just been in a deep sleep and these people coming into her life wake her up. She suddenly realizes she has a life to lead and a new appreciation of life. I don’t think there is a potential concern about getting too sad. There are moments of sadness within it, but like I said, it’s more about hope and about appreciating friendship.

You've done a wide variety, tonally, of films; are you looking for things that are more hopeful and life-affirming now?

I think when I was younger, I used to sort of long to be a part of films that were really gritty and hardcore in a way. And, you know, there’s a lot of that in life and it’s not that I shy away from any kind of dark, reality filmmaking, but I really do now — I want to help make people feel good about themselves and their lives, you know? And this doesn’t mean that I just want to make these comedies that have a kind of — there’s this sense of gratuity about them.

I like the tone of Nick’s writing because it just seems so reflective of the way we actually do this. And I think if people see themselves in the characters onscreen, that makes them feel good. But if they see something that’s not attainable, that makes people feel inferior, and I don’t want to do that to people.

With the breadth of films and television that you’ve done, what do people most commonly recognize you from?

You know, still -- there are few. And still would have to say "Muriel’s Wedding" is my most popular, still, film. It was my second job and it’s still the one people will tell me that they watch over and over again, and that they own it. It’s used in therapy, it’s used in schools. It seems to have affected people on such a profound level. And all kinds of people, all different communities and subcultures. It just kind of breaks through something. And that’s pretty incredible! It was 20 years ago!

It amazes me that people still appreciate it and get something real out of it. Because ultimately — I mean, I make movies because it’s something I personally enjoy, you know, my experience is great. But you also want people to like it. When they really do like it and are still talking about it decades later, it’s really quite moving.

Is there any kind of master plan in terms of your moves between TV and film?

My plan is to have no plan. If you know what plan you have, life has its own ideas, and will take you in any direction it pleases. So my idea about life is to just be open to it and to go with the flow and go with my gut. And try to get involved in things that I believe in and that I feel have worth and integrity.

But having said that, I’m starting a production company because as an actor, you’re kind of just waiting around at the mercy of other people. So now I want to start producing and directing and, you know, start making films from the early  stages, not just coming in as an actor. Even making decisions about the types of stories that are told and not just being a part of someone else’s storytelling. Which is satisfying to a certain extent, and I love it and I don’t want to do anything else with my life, but I do want to kind of start getting more involved.

There are several different stories that I have my eye on. There’s one that I’m writing; there are a few books I’m getting the options on. And I guess the common thing is, whatever it is that draws me into being an actor in a movie, is just a matter of something that makes me feel very passionate, something that has a truth to it.

It’s becoming more and more common for actresses in particular to get involved in producing their own projects, and I wonder if that’s a reaction to the difficulty in getting fulfilling roles as an actress. Have you experienced Hollywood's gender imbalance?

Well, not personally, but I think that is a grave problem. And something that I want to help address. I think there’s a real imbalance in terms of storytelling, the stories being told. I want to try and help even that out.

A Long Way Down Toni Collette