"I am living in a horror movie": What it's like to raise a family in Gaza

My voice is only one of millions suffering through the nightmare in Gaza. Is anyone out there listening? 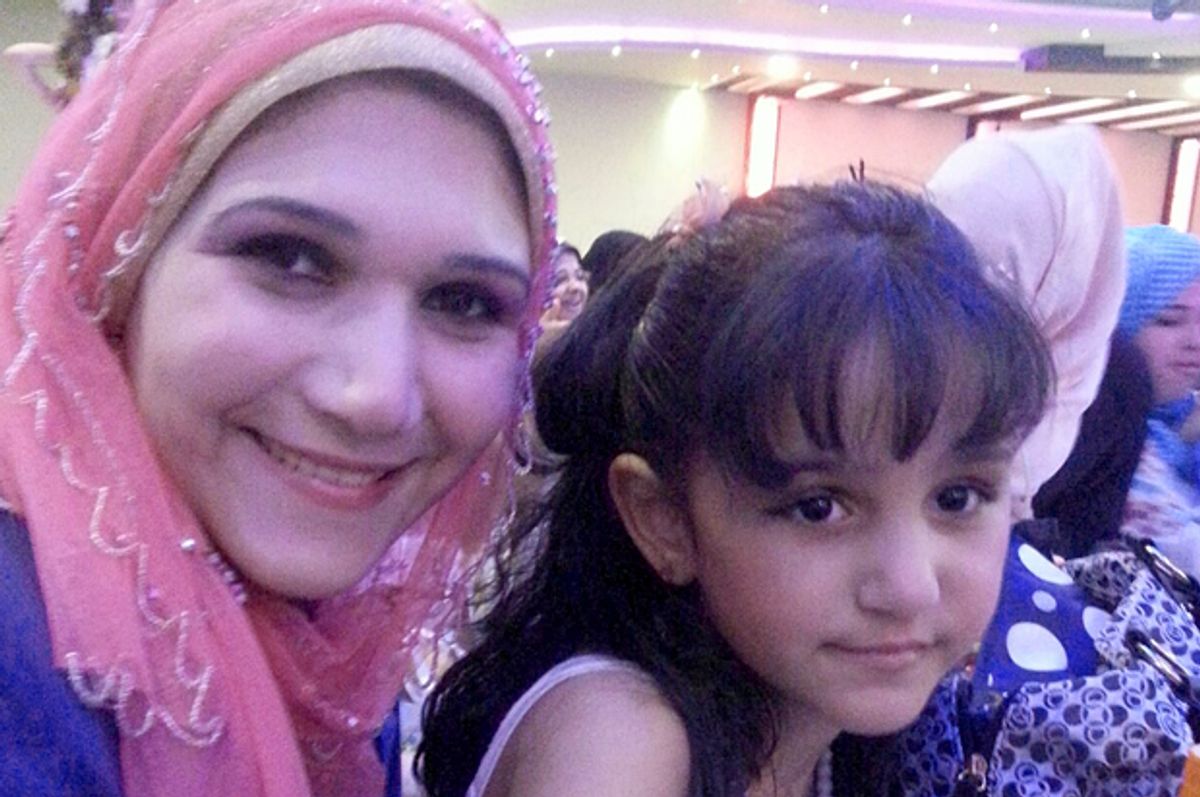 I can hear explosions as I write this. They are so close, the furniture rattles and the lamps shake. There’s talk of a ceasefire, but it doesn’t feel like it here. I am living in a horror movie.

I keep thinking about the fact that Gaza was already in a terrible state before these bombings. Unemployment was high, food aid was common, people were living in poverty. So you can imagine how much worse it is now.

My daughter Joudi is only 5 and already has been through three of these bombardments – first in my womb in 2008-09, then in 2012 and now in 2014. I can see the question marks in her eyes. What do I tell her? Is there an adequate word to describe this situation?

At least we’re alive. The park behind our apartment building was bombed and the explosion rocked the whole area. The noise was deafening. There isn’t a single street in Gaza that’s safe.

The other morning we saw we were really low on milk. My husband ventured out to a nearby store. While he was away my heart pounded with worry and I watched for him every second he was gone. Turns out that the errand was all for nothing. The store was out of milk. Now we have to find other options for feeding our baby.

It feels like there is no end in sight. In the meantime the crossings and borders into Gaza are only sporadically open. Very little food or fuel is coming in. The damage is really extensive – to farmland, buildings and a lot of other infrastructure. Gaza’s water supply is at risk because it is too dangerous to attempt any emergency repairs to parts of the network damaged in the bombings. So far, the U.N. estimates more than 600,000 people have lost access to water and half the sewage network is out of service. It will only get worse.

We’ve been getting about six hours of electricity a day, but on Tuesday ours went off after two hours because a bomb apparently hit some infrastructure that delivered it to our place. We started camping out in the center of our apartment, as far away from the windows as possible. Flying glass causes the most injuries.

We’ve had very little sleep for more than a week. It has been really intense: There were bombings from the sea and air and I also heard the sounds of rockets launching. A house on my brother’s block was bombed yesterday. We fled our apartment at midnight on Wednesday, because the bombs were falling so close. Hopefully we’ll return in a day or two. We’re not alone. Thousands have had to flee their homes with nothing more than the clothes on their backs.

I have insufficient words to describe what is happening here. My voice is only one in more than a million who are suffering through this never-ending nightmare. Is anyone listening out there?

Now we live in more fear in this ground assault. We are making plans, ready to flee in a second. Our bags packed with passports, money and valuables. We never change into pajamas – ready to go outdoors or to meet God. We call around to check on our friends and family and my colleagues from work but what can we say to each other? The number of deaths and injuries keeps rising.

The brave staff with the American humanitarian organization I work for, ANERA, is managing against all odds to get vital medicines and medical supplies delivered to local hospitals, whose supplies are severely depleted. We are trying to help as much as we can but even getting relief supplies to those in need is a dangerous, life-threatening activity.

Everyone is exhausted, distraught by this latest violence and worn out from years of misery. I feel hopeless and helpless as I sit here wondering what will happen to my life and my children.

If we survive all this yet again, then it will be time to pick ourselves up, assess the damage and, if the building materials are allowed into Gaza, start rebuilding our homes and our lives. Yet again.

Rania Elhilou is ANERA communications officer in Gaza. For more than 45 years the U.S. humanitarian organization has been providing relief aid and development assistance to Palestinian communities in the Middle East.