When Dick Cheney told the truth about Iraq 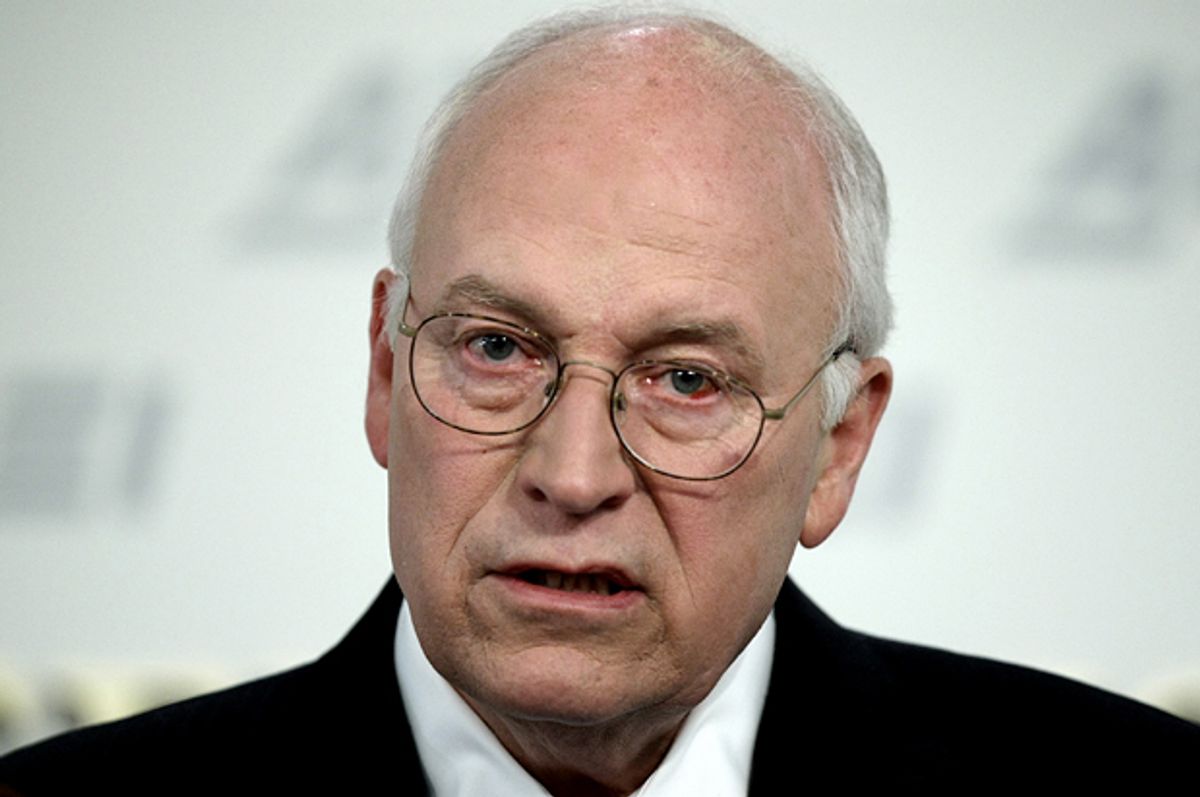 Stephan Richter’s recent “Iraq’s Predictable Fate” notes that then German Chancellor Gerhard Schröder had warned the George W. Bush administration in 2002 that the invasion of Iraq was ill-advised.

The majority of Americans — and both political parties — once cheered on that invasion. Americans belatedly have come to realize that they would have been much better off if Schröder’s advice had been heeded.

To be sure, only a tiny minority of Americans have been directly touched by the cost of the war in terms of American lives lost and limbs destroyed. But all Americans will long feel the fiscal burden of amortizing the money cost of the war, including the long-term medical and social support of the warriors sent out to fight that war.

And it is anybody’s guess what the Iraqi people might say now if they were polled on the benefits of the U.S. invasion.

But what about top U.S. policymakers? Were they really so much less educated about Iraq? Were they unaware of the well-known history of tribal enmity that forever smolders beneath the surface in arbitrarily composed Iraq – as well as the futility of attempting to invade that country?

Ironically, and tragically for the United States as a country, none other than former U.S. Vice President Dick Cheney issued the same warning in 1991 and 1994, drawing on the same lessons from history.

Unfortunately, by 2002 Mr. Cheney had all but conveniently forgotten his earlier wisdom proffered during the 1990s. The episode and the details are very much worth recalling, because they show what happens after someone simply “converts” to the belligerent credo of the neo-conservatives (a.k.a. neo-cons).

Cheney, in prior incarnations, had earned a reputation as a measured man. He soon became the top marketer for, and enforcer of, the ill-conceived invasion of Iraq to the American people.

Cheney, the wise man: The evidence on video

On April 7, 1991 Cheney appeared on ABC news’s This Weekas the then U.S. Secretary of Defense in the George H.W. Bush Administration. Secretary Cheney was asked by the late elder statesman of ABC News, David Brinkley, why the U.S. government did not invade Iraq proper after the liberation of Kuwait in Operation Desert Storm.

BRINKLEY: One other question — it keeps coming up. Why didn’t we go to Baghdad and clean it all up while we were there?

Would it be fundamentalist Islamic? I do not think the United States wants to have U.S. military forces accept casualties and accept the responsibility of trying to govern Iraq. I think it makes no sense at all.

A repeat of these talking points can be seen on a YouTube clip, apparently of an interview on C-SPAN in 1994. In the interview, then ex-Secretary of Defense Cheney offered roughly the same talking points as he did on ABC News in 1991. He then added ominously:

If you can take down the central government of Iraq, you can easily see pieces of Iraq fly off. Part of it the Syrians would like to have in the West. Part of Eastern Iraq the Iranians would like to claim – fought over for eight years.

In the North you have the Kurds, and if the Kurds spin loose and join with the Kurds in Turkey, then you threaten the territorial integrity of Turkey. It’s a quagmire if you go that far and try to take over Iraq.

Cheney noted in addition that conquering Iraq and deposing Saddam Hussein was not worth the U.S. casualties it might entail, not even to speak on the death toll and hardship it might visit on the people of Iraq.

Why do the U.S. media still cover for the Bush team?

One can understand why former Vice President Cheney would just as soon not be reminded of these prescient remarks made in the aftermath of Desert Storm.

One can understand also why those politicians, pundits and media personalities who are heavily invested in the aggressive foreign policies espoused by the so-called neo-conservatives (or neo-cons) now spare Mr. Cheney the embarrassment of confronting his earlier dicta on Iraq.

After all, even though they are proven wrong once again, they are eager now to use their moment in the media “sun.” They want to provide their neo-con theories with another lease on life in the media spotlight.

What is much harder to understand is why the mainstream media – who make great ado about being papers of “record” — spare Mr. Cheney and the rest of the neo-cons that embarrassment. Their silence prevents Cheney and Co. from being held accountable – the opposite of what American democracy should be all about.

For all their still very voluminous personnel resources, among the U.S. media only very few stood out for their clairvoyance on the subject matter. McClatchy ranks top among those few.

Yes, humans can commit errors, even grave ones. However, the public, or those whose profession it is to work on the public record, should not condone proven malfeasance with their silence. Such silence, in real life, has but one practical consequence.

It makes the silent co-culpable – if not for committing the faulty act itself, but for covering up its tracks by omitting the known facts.

Such deliberate ex-post-facto whitewashing of the past is not good for any democracy’s health, especially one so keen to preach democracy’s virtues around the globe. And it most certainly isn’t what the American people need after their country’s government created chaos in a region that needed stability.

Amateur hour in the Obama camp

Most puzzling of all, however, is the inability of the Obama Administration to defend itself.

Obama’s Administration hardly fights the new charge – now very widely adopted in the media as their dominant narrative on Iraq – that the current mayhem in Iraq is the result of President Obama’s decision, and his alone, to beat a hasty, complete retreat from Iraq at the end of 2011.

If nothing else, that begs the question of what difference the proposed alternative — leaving a residual U.S. force in Iraq — would have made. Would it have been sizeable enough to be able to avert the current calamity in that country — and in neighboring Syria?

A classic and visible example of the Obama Administration’s inability to defend itself against neo-conservative charges, and to inform the American people truthfully on the matter, is the appearance of State Department spokeswoman Marie Harf on Fox News’s "The Kelly File" on June 23, 2014.

In response to pointed and devastating questioning by Ms. Megyn Kelly, Ms. Harf would have been well advised to remind Ms. Kelly of Mr. Cheney’s sage predictions of 1991 and 1994, had Ms. Harf been aware of them, as surely she should have been.

On more than one occasion, Ms. Harf could also have reminded the interviewer and the Fox News viewers that the decision to withdraw not just combat forces, but all U.S. forces from Iraq by December 31, 2011, was not Obama’s decision alone.

The order actually had been inked into a Status of Forces Agreement (SOFA) signed ceremoniously by none other than President George W. Bush.

He did so jointly with another disastrous creation of the Bush Administration, Iraqi Prime Minister al-Maliki, on December 14, 2008. That event occurred just a few weeks before President Bush left the White House and President Obama was sworn in as President.

Bush did it – and Obama covers for him. Why?

The White House “In Focus” post on that agreement, dated December 14, 2008 includes this bullet:

■  The Security Agreement also sets a date of December 31, 2011, for all U.S. forces to withdraw from Iraq.

This date reflects the increasing capacity of the Iraqi Security Forces as demonstrated in operations this year throughout Iraq, as well as an improved regional atmosphere towards Iraq, an expanding Iraqi economy and an increasingly confident Iraqi government.

A Congressional Research Service (CRS) analysis of this agreement, dated July 13, 2009, notes at the top of page 10 that this statement on the complete troop withdrawal of U.S. troops reflects article 24.1 of the SOFA.

President Bush’s then Ambassador to Iraq Ryan C. Crocker had negotiated it during 2008 with the Iraqi government and President Bush had signed it mid-December of 2008.

The neo-cons and their defenders claim that President Obama would, early in his administration, negotiate yet another SOFA with Iraq, calling for a sizeable residual U.S. force to remain in Iraq past December 2011.

If that were so, then why would President Bush make haste only weeks before leaving the White House to sign an agreement completely counter to that idea?

Through intense questioning and analyzing, they could make up for past media failures regarding complicity in mindlessly whipping up patriotic fervor pre-Iraq invasion.

In short, faced with an opportunity finally to get the record straight, the mainstream media simply opts out of its self-ascribed role as truth teller yet again.

It is true, of course, that candidate Obama during the presidential election in 2008 had promised to withdraw all U.S. troops from Iraq if elected. It is also true that from time to time he has taken credit for the withdrawal, after it had been effected and before the current mayhem erupted in Iraq.

The president now blames Prime Minister al-Maliki that no residual force was left in Iraq after 2011.

In truth, however, President Obama merely faithfully executed a strategic decision made by President George W. Bush toward the end of his term in office, formally enshrined in his SOFA of December 14, 2014.

One should think that anyone sent by President Obama into the lioness’s den of Fox News’s "The Kelly File" would have had those facts at her or his finger tips and used them smartly to rebut charges that are at variance with the truth.

Instead, the entire Obama Administration, from the President on down to the State Department, allows itself to be pummeled time and again.

The Obama Administration hardly defends itself against discredited neo-cons whose bold, data-free theories had been put to the trash heap by actual events, precisely as Mr. Cheney had predicted it in 1991 and 1994.