Why so many elderly Chinese are collecting trash 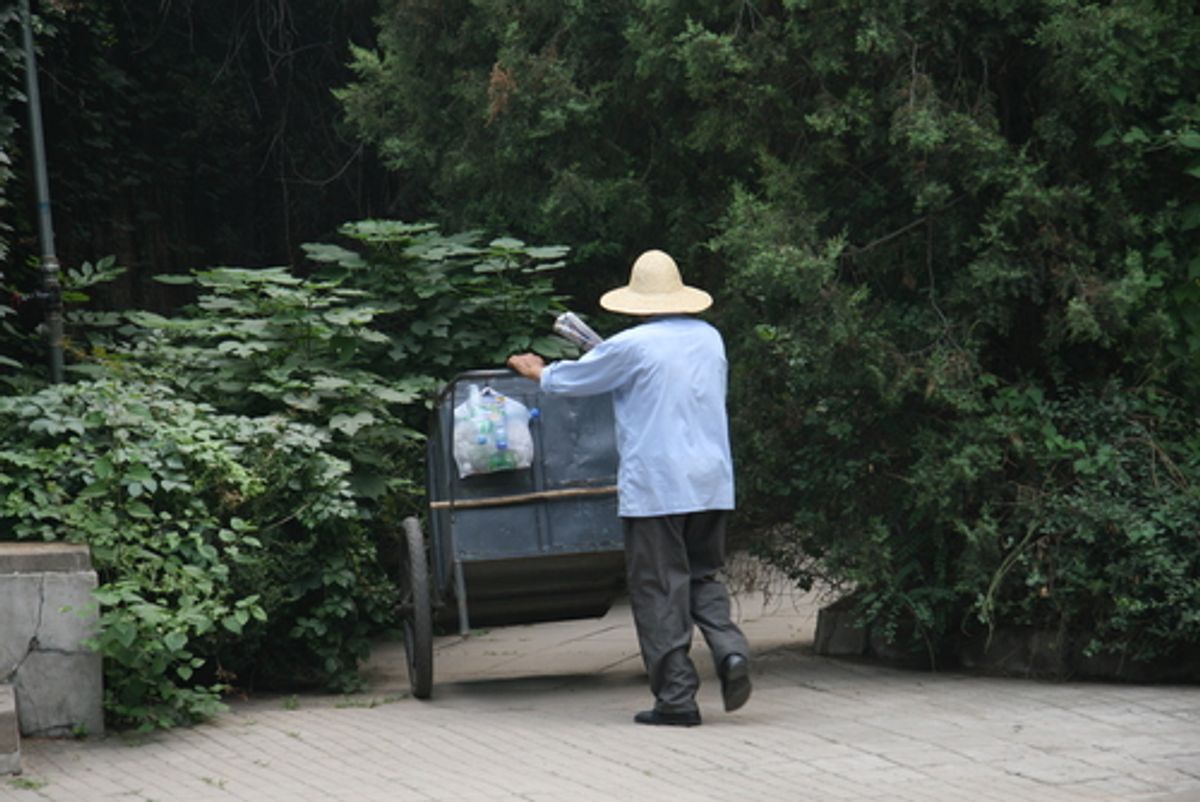 SHANGHAI, China — How do you picture your retirement? Spending time with your family? Traveling? Enjoying your hobbies?

Or maybe rummaging through the trash looking for bottles to sell for a little extra cash?

According to the World Bank, some 2.5 million people work in the “informal waste management sector” in China, picking through trash for recyclable materials to sell. As any visitor to a major Chinese city will soon notice, many of these trash pickers are elderly people, unable to support themselves on meager government pensions.

China has the fastest growing aging population in the world. By 2050, 437 million people — a third of the population — will be more than 60 years old.

Millions more under-60 are already pensioners, due to China’s low retirement age. Currently, men working in the public sector finish work at 60, while female white collar workers retire at 55, and blue collar women stop work at the comparatively sprightly age of 50. A 2007 United Nations study estimated that in 2005 there were 16 retirees for every 100 workers in China. By 2025, the ratio will be 64 to 100.

China’s pension system is already showing the strain. Almost 50 percent of provinces are unable to pay retiree costs and rely on financial assistance from Beijing. A report by Deutsche Bank and Bank of China found a $2.9 trillion hole in the country’s social security fund, which could widen to a staggering $10.9 trillion by 2033.

Traditionally, elderly Chinese would rely on their children for support. Filial piety is one of the country’s most important core values. However, the one child policy has upended this, as more and more families end up with one or two working adults supporting multiple retirees. If a pensioner’s child dies, or is unable to work, there is usually no one else to help with the burden.

That has left many retirees dependent on the basic pension provided by the government — and “basic” is a painfully accurate description. In Shanghai, one of the richest (and most expensive) areas of the country, residents are paid 500 yuan ($82) per month. In Shaanxi province, in central China, retirees only receive about a fifth of that. In comparison, the average monthly wage was 4,692 yuan ($750) in 2012, according to the municipal bureau of human resources and social security.

Medical expenses, an unavoidable cost of aging, can suck this income dry. State insurance plans don’t cover much beyond the most basic procedures.

“I’ve spent more than $10,000 out of my own pocket for dozens of visits to the neurologist over the past two years,” one elderly patient said.

“For many people, the pension is not enough to support them, and their children can’t support them, so they have to work,” said Chen Liwen, a researcher at Nature University, an environmental NGO in Beijing. That work is usually trash picking, sifting through bins for scrap to sell, usually Polyethylene terephthalate (PET) drinking bottles.

“I met one woman, about 80 years old, she pushed a trolly and picked for recyclables every day because her husband had died from cancer and they had a lot of debt,” Chen said.

A 94 year old Beijing woman made news in 2012 when it was reported that she had ben collecting bottles and paper for more than a decade to support herself and her 74 year old disabled daughter.

The work is demanding and unrewarding. “It’s about four PET bottles for one yuan [$0.16],” Chen said.

Adam Minter, author of Junkyard Planet: Travels in the Billion Dollar Trash Trade, echoes that assessment: “Somebody with a bag looking for bottles on the subway isn’t going to make more than a few yuan per day, [though] somebody with a cart is capable of making several hundred if he or she gets lucky.”