My real-life "Footloose": I grew up in a town that banned secular music

As a girl in rural Kentucky, I threw cassette tapes into a fire and was taught that Satan is in "Hotel California" 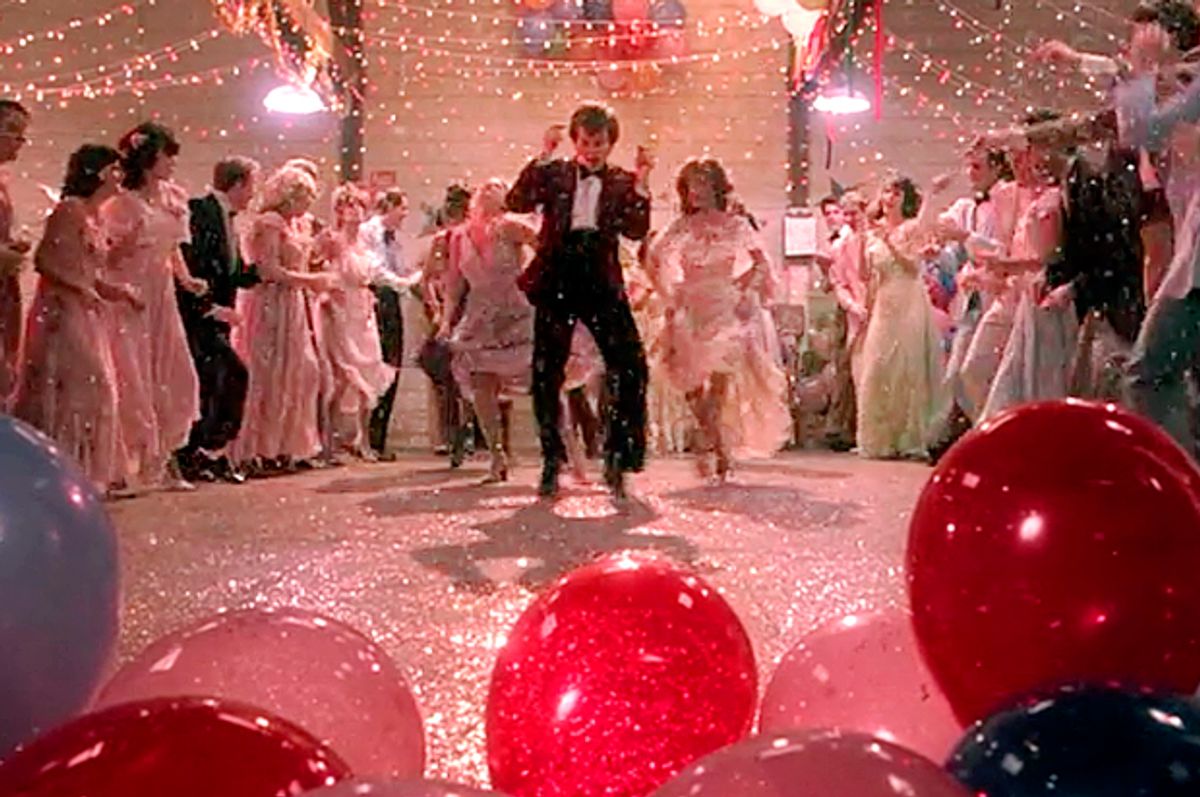 I was 14 when "Footloose" came out. The original one, in 1984. I lived in a tiny town in rural Kentucky. We didn’t see many movies. You had to find a parent willing to drive the 40 minutes to the nearest theater in Lexington. Even tougher, you had to find a movie that met the town’s evangelical standards, which — given the Christian college and the seminary across the street — were strict. Disney movies like "Herbie Goes Bananas" passed muster; "Return from Witch Mountain," with its paranormal (read: Satanic) activity, did not.

Nearly everyone in our town of 3,000 was involved with the college or seminary. But whether you were there temporarily, as a student, or permanently, to teach with your PhD, or even to work in the county, as my mother did, you wouldn’t willingly have ended up there unless you were a Protestant evangelical. Upon employment or matriculation, there were documents to be signed. Codes of behavior, statements of belief. Even the public elementary school was staffed by more than its share of seminary wives.

There’s a lot of unity in a shared ideology, but we had our own exegetical-based disagreements, too. Students at the college and seminary studied the Old Testament in Hebrew, the New Testament in Greek, and pastors of the twenty or so churches took apart single verses Sunday after Sunday. Lively discourse arose. Should believers be baptized with a dignified sprinkle, for example, like in my own United Methodist church? In the book of Isaiah folks were purified by a sprinkle of blood, indicated by the Hebrew word nazah. But in the book of Mark, the Greek word, baptizo, means “to immerse,” and that’s what they did in the bathtub behind the pulpit in the Christian Church. (My friends who attended the Christian Church did not consider me officially baptized.) John the Baptist handled the whole ordeal in the river, so there went the town Baptists, out-doing us all by wading right into the muck and current.

We disagreed about the Holy Spirit, too, and how one acted when possessed by him. Acts 4:2 describes Pentecost, a kind of freaky up-down escalator moment, with Jesus Christ ascending and the Holy Spirit descending. That’s when a tongue of flame appeared on each disciple and they began to speak in languages they didn’t even know. (That’s glossa in Greek, meaning tongue or language, in combination with heteros, meaning other.) As a result, some churches spoke in tongues while others interpreted another verse in Second Corinthians, “tongues shall cease” (glosso again, with pauo, which means “to stop forever”) to mean the time for speaking in tongues was over. And on and on. All up for endless debate.

What was rarely up for debate, however, were the dangers of secular music, with its relaxed approach to sexuality and morality. Music was powerful. We knew that from the praise choruses we sang to open our our hearts for prayer. These were based on Biblical verses, like, from Exodus, “I will sing unto the Lord for he has triumphed joyously the horse and rider thrown into the sea…” which was up-tempo and usually kicked off a meeting by feeding our frantic, junior-high energy. After a couple of those we’d move on to the softer songs, like the melodious repetition of the word “Hallelujah,” which was meant to work us into the ultimate state of receptivity before the leader launched us into prayers that lasted for a good long time. And if songs like these could ready us for prayer, the reasoning went, what could songs unlike these ready us for? What could listening to Madonna’s “Crazy for You” open your heart to, not to mention that uncharted territory below the heart? "Touch me once and you’ll know it’s true."

In the Midwestern "Footloose" town, both secular music and dancing were officially off limits. Our ban on dancing was also official, but the ban on secular music was to be enforced, Foucault-style, by our own rigorous consciences. Some of the boys I knew had begun to enjoy Led Zepplin or the Eagles. Some of them made me mixed tapes. But at campmeeting in the summer, the backmasking guys visited and we heard, “Oh here’s to my sweet Satan” in “Stairway to Heaven,” and “Satan hears this. He had me believe in him,” in “Hotel California.” Our consciences left us no choice. We unspooled our cassette tapes into the flames of a great, purifying campmeeting fire.

And we had options. Held at the ground of that self-same campmeeting was Icthus (Greek for fish, symbol of Christ), an enormous Christian music festival established in 1970 as the god-fearing answer to Woodstock. It took place each April, over a long, muddy weekend, during which we all volunteered in the temporary store so we could get in for free. Mostly Icthus featured mediocre Christian pop-style singers, but there were some gems, by any standards: the gospel of Andre Crouch, or the remarkable guitar riffs of the missing-fingered Phil Keaggy.

At school, the county kids said "Footloose" was about a town just like ours. From the pulpit, it was described as another example of the convenient, disrespectful way Hollywood treated believers. I wasn’t sure what this meant, beyond the general persecution from the world that we were taught to expect anyway, but I was dying to see the movie. Then our youth group leader miraculously announced that perhaps our small, same-sex Bible study groups might take one of the church vans to the theater in Lexington to watch the movie for discussion purposes. I knew the Holy Spirit had intervened.

My small group leader was an older girl I adored named Rachel. She was tall, and blonde, and her conscience told her that a lot of secular music was okay. Sometimes we met one-on-one, and she’d pick me up in her old car and pop in an 8-track of Fleetwood Mac and say, “listen to this,” and I would close my eyes and try to memorize it all.

Rachel read through the discussion questions in the church van, before we all trekked inside the theater. Then we all watched the movie, which was a rip-off. That town wasn’t anything like ours. There was just the one preacher, for starters, and only one main church, and the townspeople talked pointedly of misbehavior and censorship as if that was all that was going on, as if they didn’t have gardens to tend, or dinner to make, or basketball to watch or listen to. After the movie I’m sure we debriefed prayerfully. Possibly we talked about the dangers of defiance. About the fact that Ariel tells her father she isn’t a virgin. I like to think that, thanks to Rachel, we talked about the possibility of dancing as harmless fun, not just a prelude to sex.

What stayed with me, though, was the music. Deneice Williams, Bonnie Tyler, Kenny Loggins. Shalimar. Somehow, from somewhere, I acquired the soundtrack, my first commercially made tape — perhaps Rachel bought it for me? — and my conscience let me listen to it over and over on my mother’s cassette player. "Let’s Hear It for the Boy" and sometimes, scandalously, "Dancing in the Sheets." I can’t say why I liked those songs — few would say they were the best the 1980s had to offer. But I leaned close to the tiny speaker and let each one fill up my head. In the pause between songs, I got so I could anticipate the opening of the next, and I held my breath and waited for it.

Over the years my musical tastes have changed some. I like a little bit of everything, from Rickie Lee Jones to Wu Tang Clan, but I tend to be less enthusiastic about the '80s pop genre of the Footloose soundtrack, and contemporary Christian music not at all. I’m a long, long way from my hometown and my original set of beliefs, but sometimes I write about evangelicals in my fiction, and invariably the questions come: did you grow up this way? Sure, I say, and then I feel what I always feel, the struggle to tie this past to my life today. To make it count. And the truth is, some of the old lessons linger.

It’s obvious that music does have power — not unlike the seductive power of narrative, as the theorists tell us. It is capable of carrying us away. And an open heart is a defenseless heart. As much as I enjoy music today, I don’t entirely trust it.

It makes me feel every which-way: sexy when I work out to Justin Timberlake, smart when I listen to Cake, like the bluegrass girl I used to be when I listen to Patsy or Loretta, or George Jones, or George Strait, or Conway Twitty, or any of the country musicians my wayward, fallen, former-minister-father loved. I get a little drunk in my head on all the different fantasies, and even though I like the way this feels, I find I can’t tolerate it for long. I never, ever, have music playing in the background when I write, because suddenly I’m not writing. I’m lost in great, sweeping waves of emotion when I’d not thought myself anywhere near water. And god forbid I get cornered unexpectedly in public by one of the old campmeeting hymns that Garrison Keeler won’t stop including in "A Prairie Home Companion." When that happens I find myself as I did the other day in my car, weeping along to "The Old Rugged Cross," open-hearted and maudlin as an old alcoholic, heavy, suddenly, with the old weight of selves I’ve tried to leave behind.

Angela Pneuman is the author of Lay It On My Heart (Mariner).