Reinventing the American highway: The promise (and pitfalls) of learning to love tolls

America's infrastructure is dramatically underfunded, and our roads are falling apart. Time to change things up 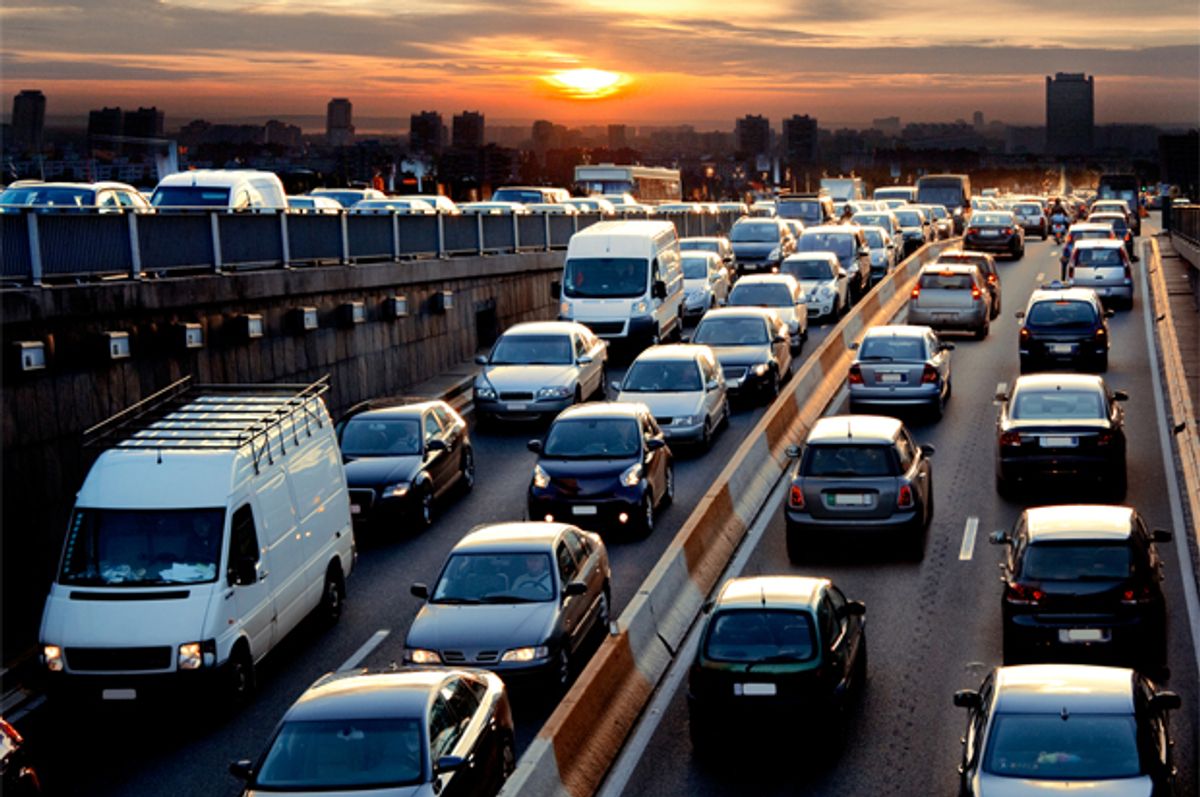 It has always been cheap to drive in the United States, relative to other developed countries. As far as our road budget goes, it’s too cheap.

The money American drivers pay into the federal Highway Trust Fund, through a tax exacted at the gas pump, no longer covers the costs of building and maintaining the nation’s road network.

It’s easy to see why this levy, which dates from the inception of the Interstate Highway System, no longer serves its purpose. The federal gas tax has stood at 18.4 cents a gallon since 1993, rendering its budget-replenishing power woefully small. Neither President Obama nor Congressional Republicans seem to be interested in raising it and resetting the calculus.

Want a glimpse of the future of roads in this country? Look elsewhere. As Congress juggles stopgap solutions, the U.S. road network is in the beginnings of a profound structural shift towards privately run turnpikes.

Toll road mileage in this country has grown steadily over the past couple of decades, with annual capital spent on toll roads ballooning from $155 million at the turn of millennium to $3.65 billion in 2011. All in all, we’ve spent $54 billion on 96 public-private road projects since the early '90s, almost all of which include tolls. (That’s how investors make their money back.) The trend is particularly pronounced in urban areas, where tolled miles jumped 36 percent between 1998 and 2010.

There are several explanations for this shift. First, state roadway budgets have run low. Many states get more than half their highway funding from the federal government, and in any case statehouses have their own gas taxes to argue about. Second, tolling technology has advanced significantly in the past two decades, and its applications have multiplied. No longer does a toll road required controlled access, or full stops — cameras can capture license plates and bills are sent in the mail. Finally, states are learning, through trial and error, how to properly harness private investment for public infrastructure projects.

Relatively speaking, toll roads remain few and far between. Of the 46,876 miles of Interstate Highway in the country, only 3,300 are tolled — and many of those miles, as sections of older turnpikes, were grandfathered into an otherwise free system. Still fewer are the miles of state highway with tolls.

Why didn’t planners make Americans pay to use the Interstate in the first place? For one thing, the gas tax saved the Interstate Highway System from building several thousand tollbooths and employing tens of thousands of toll collectors. Free travel also helped the big roads accomplish their aim of decongesting existing streets — tolls might have encouraged drivers to continue using other routes. Finally, the planners simply didn’t anticipate that tolls could cover the costs of the new roads.

In the master architect of the Interstate system, Thomas McDonald, "you find a belief that free and unimpeded travel to the greatest extent possible should be, if not a right, then an easily obtained privilege for people,” said Earl Swift, historian and author of "The Big Roads."

In most other countries, though, paying to drive on the highway is as normal as paying to board a train. France, for example, offered public and private companies concessions to build the nation’s motorways in the post-war decades. Today, more than three-quarters of the country’s 8,000-mile network is tolled. For countries without the means to raise enormous sums of capital, the concession business has been a ticket to invaluable transportation infrastructure.

Currently, nearly half of U.S. states don’t allow tolling. But the big ones — California, Texas, New York, Florida and Illinois — all do. And the Obama administration has said it would like to relax long-standing rules regulating how and when states can toll Interstate Highways, opening up a vast, untapped resource to statehouses.

The leader in the field has, without a doubt, been Texas. Since 1991, one in four new miles of toll road in the United States has been built in the Lone Star State, and Gov. Rick Perry made toll roads the keystone of his administration’s transportation goals. In 2001, in a plan that has since been scrapped, Perry envisioned building a network of some 4,000 miles of toll road. Nevertheless, during his term, toll revenue in Texas has doubled, and is now equal to that from the state gas tax.

That said, there are generally a few things that can go wrong from the perspective of a concerned citizen. The first is a non-compete clause. Any investor dropping a few billion on a new toll road is going to want assurance the state won’t turn around and build a free road next door. But if the contract isn’t properly drawn up, such agreements can stunt the ability of governments to build anything at all.

Another worry is that toll rates won’t be properly regulated — or more dangerous still, could be linked to other, more expensive projects. A good example of this is the (public) Port Authority of New York and New Jersey, which will have raised the toll on the George Washington Bridge by 375 percent between 2001 and 2015, in part to fund its real estate ventures. A regular commuter could end up paying more than $6,000 in tolls to cross the GWB each year — about 20 times the average motorist’s annual contribution to the federal gas tax.

Finally, with shortsighted state officials signing deals with international infrastructure conglomerates, there’s the possibility of a bad deal: giving away decades of future toll revenue in exchange for a quick cash payment. Merrill Lynch estimated that investors in a 75-year deal for the Indiana Toll Road, signed in 2006, could break even by year 15 of the lease. Indiana got $3.8 billion in the deal; the investors will eventually reap some $21 billion in profits.

Experts say these issues are fading as states wise up to the protocol of PPP deals. “Government has gotten a lot smarter about the variables,” says Neil Gray, the director of government affairs at the International Bridge, Tunnel and Turnpike Association.

But a political backlash is in the works in Texas, a state you’d think would be gung-ho for free-market infrastructure. Greg Abbott, a Republican who is favored to succeed Perry in Austin, has said he will build no new tolls (or raise taxes). Terri Hall, the executive director of the anti-toll group Texans Uniting for Reform and Freedom, recently convinced the state Republican Party to drop tolling from its platform.

Progressives, too, have reason to be concerned. Tolling isn’t a less equitable way to raise money than the highly regressive gas tax, but building roads with profit in mind does influence planning decisions. According to a recent report from the Dallas Fed, “road placement has generally occurred in areas where personal incomes have been higher, making the toll collection used to repay bonds more predictable and, thus, supporting the credit rating.”

Then again, our love affair with the automobile is expensive. Tolls won’t just pay for it — they’ll drive the point home.