Stop calling soldiers "heroes": It stops us from seeing them as human — and dismisses their experience

"Hero" sounds like praise, but it's not: It glosses over the human cost of war, and keeps us from helping our vets 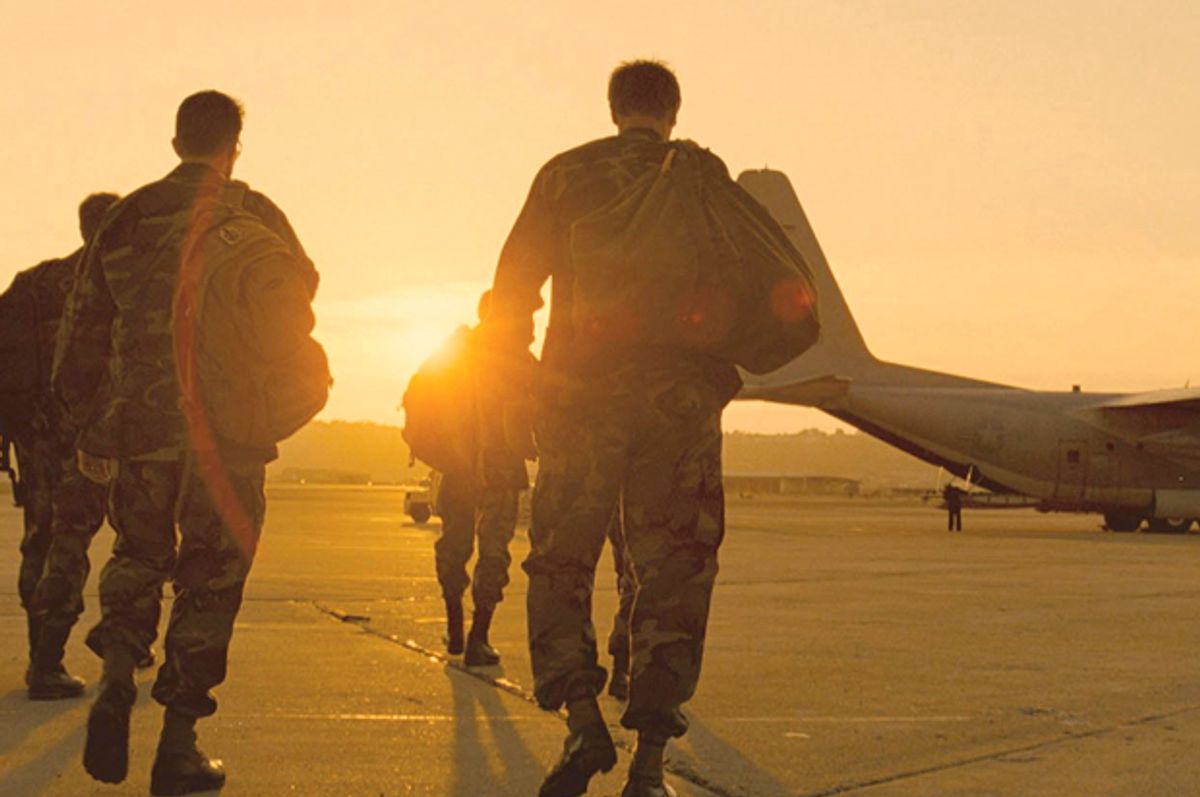 A still from "Act of Valor" (Relativity Media)
--

Last month the Institute of Medicine released a study showing that only half the Veterans with PTSD are getting treatment for the condition. While this might seem a failure on the part of the Veterans Administration, there are likely bigger cultural issues at play.

I have spent the past three years talking to American soldiers and their families.

I approached this topic as a novelist, but also as the sister of a combat veteran who’s had a 30-year career in the Army. The more I learned about life after combat, the more I realized the power of one particularly dehumanizing and often paralyzing word: hero.

What’s so bad about being called a hero? It sounds like praise, but it can be dangerously dismissive. The problem is that "hero" refers to a character, a protagonist, something in fiction, not to a person, and using this word can hurt the very people it’s meant to laud. While meant to create a sense of honor, it can also buy silence, prevent discourse and benefit those in power more than those navigating the new terrain of home after combat. If you are a hero, part of your character is stoic sacrifice, silence. This makes it difficult for others to see you as flawed, human, vulnerable or exploited. And it makes it even more difficult for you to reach out when you need help.

Homecoming is never simple. Soldiers often return to a variety of challenges including health, financial and marital issues. One in three American soldiers suffers from PTSD after returning from deployment. Fifty-five percent of women and 38 percent of men report being sexually harassed while in the military; 20 percent of soldiers turn to heavy drinking and drug use upon return. Being turned into a fictive symbol is little consolation for the weight of physical and psychological injury these people incur. According to the Bureau of Veterans Affairs, 22 veterans a day kill themselves, nearly one person an hour. For active duty soldiers it’s about one a day, significantly more than have died in combat in Iraq and Afghanistan.

It’s important to remember that PTSD affects exponentially more people than just the soldiers who experience it. It affects everyone in their families, their friends, their coworkers. Whole communities deal with the complicated effects of homecoming. With the end of military operations, we’re all feeling the weight of return, and that weight will not be lightened by using words like "hero" as a consolation prize to gloss over the very human cost of war.

“Heroes” protect us from the knowledge they gained down-range. And the expectation is they will continue to sacrifice their humanity, even when they return home, so we don’t have to learn about their experiences. But when we stop using the language of heroism it helps us see war more clearly. The fear, the boredom, the waiting, the risk, the emotional turmoil, the day-to-day jobs, the guilt, the anger, the grief, the feelings of confinement, as well as the feelings of pride, comaradarie, love, altruism. We like to think we can have no idea "what goes on over there" or "what kinds of risks people are taking." That we can’t imagine "the horrors they’ve seen." This is part of elevating soldiers to mythic status — seeing their experiences as outside of human existence, as things we can’t consider. But we actually can know, we can imagine their lives — very easily — by listening and by opening our eyes. By letting people who are returning take off the masks society insists they wear. By being a strong enough, rational enough nation to stop slapping heroic cowboy-and-Indian narratives over the sad and extremely common reality of violent conflict.

I have felt what every family feels when one of theirs is deployed. Have imagined what my brother’s days were like; have felt the surge of relief when I saw his handwriting on a letter, or a thumbnail of his face pop up on my Gmail; have turned off the news because I was afraid to hear something I couldn’t bear.

Like the majority of soldiers, my brother enlisted for a variety of reasons. The experiences he had during two tours in Afghanistan were likewise complex. Calling him a hero dismisses the experiences he’s had, makes him part of a political agenda, negates his humanity. Puts him at risk.

Military families want what all families want: respect, understanding, and for the people they love to be safe. Seeing soldiers for who they are can go a long way toward making sure those things happen. This nation can’t afford another day of hero suicides.

Cara Hoffman's second novel, "Be Safe I Love You," was named one of the Five Best Modern War Novels by the Sunday Telegraph.