Ten years into my marriage, I took back my maiden name

When I reverted to my old identity, friends worried my marriage was in trouble. Actually, I'd finally found my way 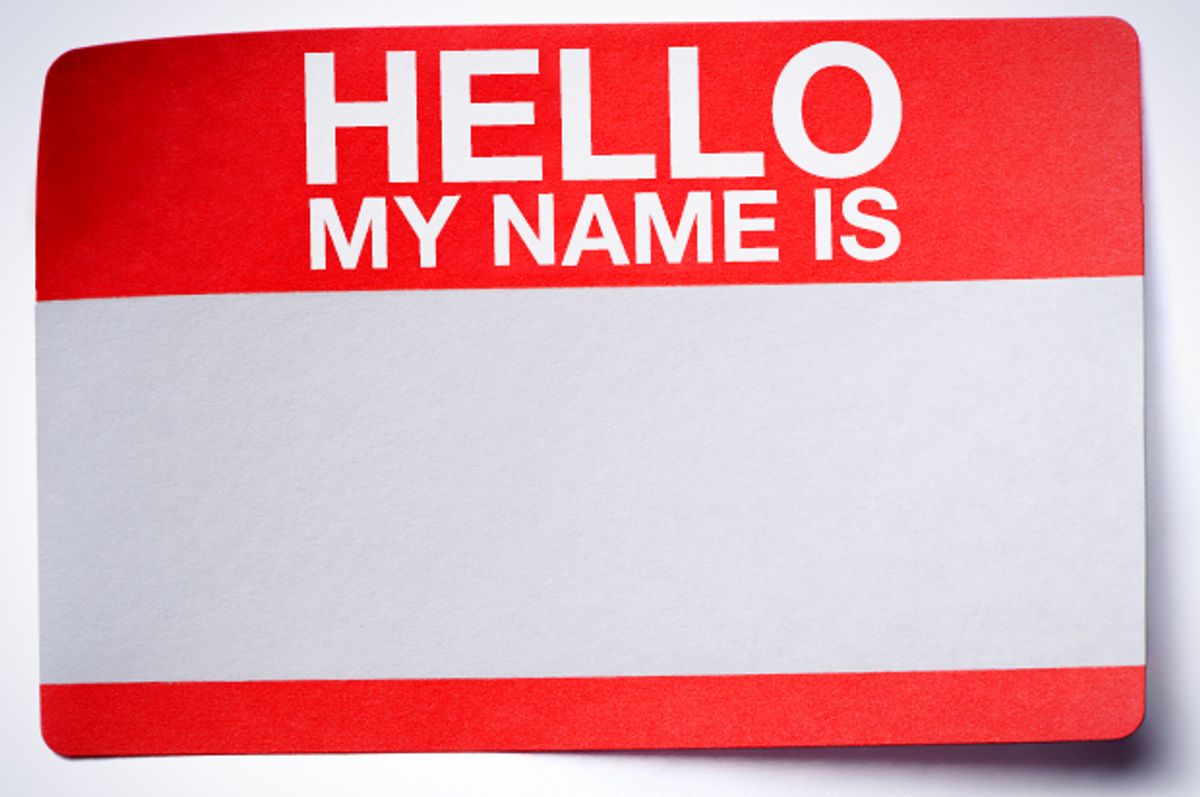 To celebrate my tenth wedding anniversary, I took back my maiden name. Ten years ago, when I changed to my husband’s name, it had seemed like the sensible thing to do. I’d never really liked my maiden name — it was always prone to mispronunciation and misspelling. And it was a made-up name anyway. We’d been Schenkolowsky prior to my great grandfather’s arrival in Ellis Island, and the name had gone through successive changes over the years, with my grandfather finally making an executive decision that the family would be called Schank.

When I’d gotten married it had felt important to show the world that my husband and I were a single unit, joined together by a common name. We were a new family, entirely separate from our families of origin. I headed into our marriage fresh from my parents’ vitriolic divorce, and wanted to put distance between my family and myself. A new name was a fresh start.

Before I changed my name I spent a lot of time Googling what would be my new name, watching the “no results found” page pull up time and again. Hana Shaklan was a non-entity. At the time that felt exciting. Here was a whole new identity ready to be carved out. Then I’d switch back and Google my maiden name, and a whole history would unfurl on the page in front of me.  A swim meet I’d participated in when I had just moved to New York City and was looking for things to join, posts I’d made on an old usenet group looking for Grateful Dead tickets back in my early twenties when I’d had a boyfriend who was into the Dead, websites I’d designed, essays I’d written, the occasional professional award I’d won: all of it constituted a whole person and a full life. But the new me had nothing. This was both frightening and thrilling, and at the time I chose to embrace the blank search results with a vow to fill them in. Who knew what Hana Shaklan might accomplish?

Eight months after our wedding I finally got around to going to the social security office.  It was an unseasonably warm April day and I was in a sweat as I made my way to the social security office. When I got there the line snaked out the door of the office. It could have been the heat, or it could have been the fact that I wasn’t altogether convinced of what I was doing, but I felt woozy and shaky as I handed my paperwork to the clerk.

“Why do you want to change your name?” asked the clerk. This could have been standard protocol, but I took it as an existential question. Because I want to start a new family, one that won’t end in screaming and accusations and tears? Because I need to show my slightly overbearing parents that I am an independent individual? Because maybe my fortunes as Hana Shaklan will be better than those as Hana Schank?

“Because I got married,” I finally stammered. The clerk nodded and stamped my forms. A few weeks later my new card with my new name arrived in the mail.

Once my name was changed I told no one. I continued to use my maiden name professionally. I set up a new email account with my new name, which I mostly used to email family members, all of whom continued to send me cards and the occasional birthday check with my maiden name. For a while I got confused on the phone when talking to customer service representatives, forgetting which name to give them. And customer service representatives were equally confused because I had appended my new name onto my old name, to become Hana Schank Shaklan. This meant that I now had two nearly identical names following one after the other on my credit card. I got called Schanklan a lot. It annoyed me, and then eventually that passed. I’d corrected people attempting to spell or pronounce my last name for my entire life. This was no different.

Then I had children.

When my son was born I found it strange that he had this same, unfamiliar name as I did. He was mine – shouldn’t he have my maiden name, which by this point I had come to understand, was still, in my heart, my only name?  Sharing my name with my children was a large part of why I had changed my name to begin with. We were a family, after all. We were a single, unbreakable unit, and we would tell the world this with our single, united name. I figured I would get used to it after a while, but when my second child started school and announced her full name to her class I felt a familiar wave of anxiety.  How could these children, whom I had grown and produced and raised, have someone else’s name?  How could I have someone else’s name?

With school came school email lists and school volunteer activities and a whole new slew of parents to meet. These parents knew me only as Hana Shaklan, still un-Google-able and still a blank page. They had no idea that I had a second, hidden life as Hana Schank. In the meantime, I was occasionally slipping up and sending work emails from my personal account.

“Who is Hana Shaklan?” someone at work replied in one such instance.

Nearly ten years into my new name, and I still didn’t know the answer. And as my tenth anniversary approached, I knew what I wanted to do. I wasn’t sure how my husband was going to respond, though.  I thought about it for several months, first turning the idea over in my brain, then changing my name on Facebook back to my maiden name to see if anyone would notice. No one did. Finally I raised the issue.

“I don’t want you to take this the wrong way, but I’m thinking about changing my name back,” I told my husband.

“Huh,” he answered. I wasn’t sure how to take that.

So I explained to him that I’d come to realize, after 10 years of marriage, that family was not about who had which name.  Our marriage was in the details, the mundane daily activities of caring for children and going to work and packing lunches. When we’d first moved in together, before we’d gotten married, we fought about who left wet towels on the bed and whether the shower curtain should remain open or closed post-shower. But now we move together as a single unit. We have over a decade of in-jokes and knowing glances and arguments together, and sometimes we communicate paragraphs with a single look. We’re silent partners in the morning as we get everyone ready for the day, handling the minutia of who has to be taken to gymnastics and who requires lunch in a paper bag for a field trip.

We move quietly through our evenings, busy with running the business of our family. We have taken turns caring for each other through illnesses and scary medical procedures, and have changed our lives to accommodate a child whose needs are slightly different than those of most of the rest of the world. And at night, when we curl up together in front of the television, we speak to each other in a kind of shorthand that has evolved over the course of our marriage, a language unique to us, and a stronger bond than any name could be. Sometimes my mother asks me if I have discussed a given topic with my husband and I’ll realize I haven’t because I already know exactly what he’ll think.

I explained all that, and when I was done talking my husband smiled.

“That was lovely,” he said. “And I think you should change your name back.”

My announcement that I would be changing my name back was predictably met with gasps from my friends and family.

“Is there trouble in paradise?” asked one friend.

Quite the opposite, I explained. Changing my name back meant that I had realized how little was in a name, how we were a family joined by a thousand things that had nothing to do with how I signed my checks.

This time when I went to the social security office I felt nothing but relief. I would be me again. But better. This Hana Schank would be one with her own, new family. She was a mother and a wife and also all of the things Google said I was. My children’s names were unchangeable, but my name wasn’t.  To take my own name back felt like the strongest statement I could make about my marriage. We would move together, three Shaklans and a Schank, bound together by so much more than a name.

Hana Schank is a writer and technology consultant. Her essays frequently appear in the New York Times, the Washington Post, and other national publications, and she has reported stories for Aeon, the Atlantic and New Republic websites, and elsewhere across the web. She is the author of a memoir and a Kindle Single.