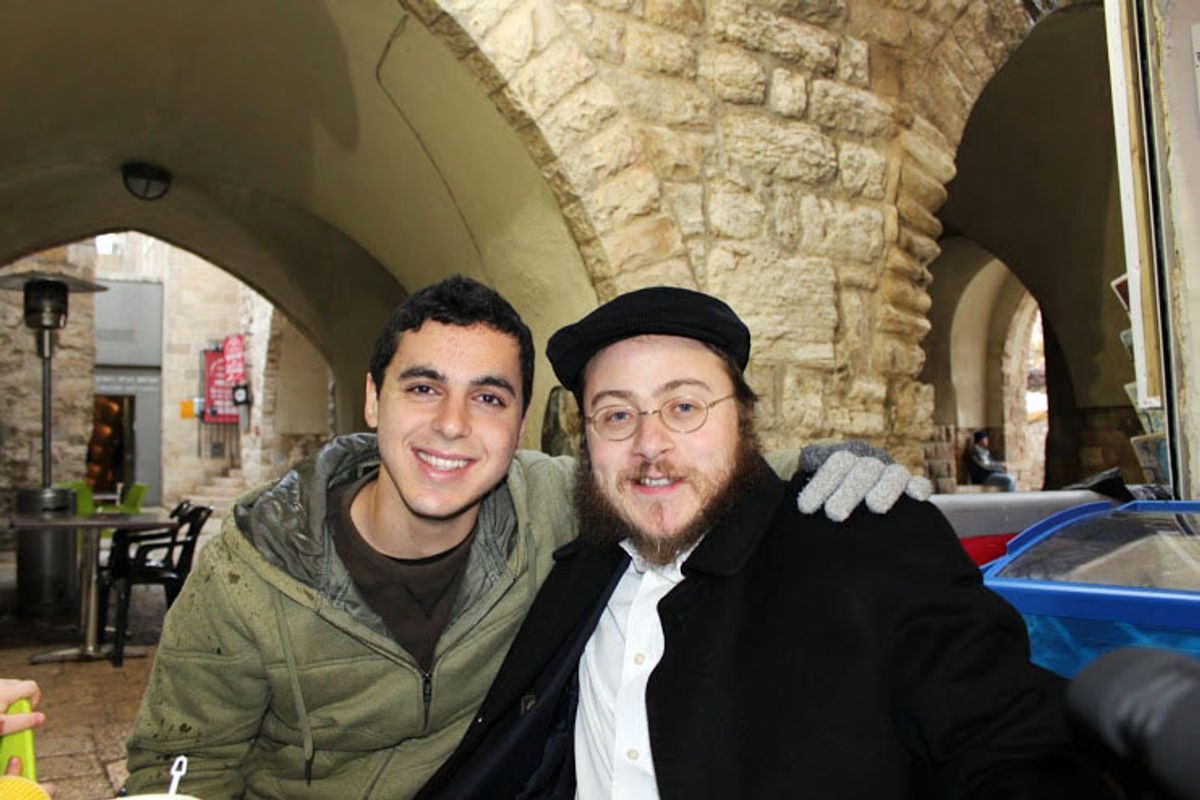 This 2012 photo provided by Rabbi Asher Hecht, shows Nissim Sean Carmeli, left, with Hecht in Jerusalem. The Israel Defense Forces said Sunday, July 20, 2014, in a statement that Carmeli was killed in combat in the Gaza Strip. Carmeli was from South Padre Island, Texas, said Deputy Consul General of Israel to the Southwest Maya Kadosh. (AP Photo/Rabbi Asher Hecht via Chabad of the Rio Grande Valley) (AP)
--

Max Steinberg and Nissim Sean Carmeli grew up in America. But they both developed a passion for Israel.

The young men's love of Israel ultimately led them to join the Israel Defense Forces, and they ended up fighting for the Jewish state in the Gaza Strip this week.

On Sunday, Steinberg, 24, and Carmeli, 21, were killed there. They were among 13 Israeli soldiers and 65 Palestinians killed Sunday during the first major ground battle in two weeks of fighting between Israel and Hamas.

Steinberg, whose family lives in Southern California's San Fernando Valley, was a sharpshooter for the Golani Brigade, his father, Stuart Steinberg, told The Associated Press on Sunday.

Earlier Sunday, the IDF said in a statement that Carmeli, 21, a sergeant, was killed in combat in the Gaza Strip. Carmeli was from South Padre Island, Texas, said Deputy Consul General of Israel to the Southwest Maya Kadosh. She said Carmeli moved to Israel four years ago and added that the consulate helped his family get a flight there Sunday.

Rabbi Asher Hecht of Chabad of the Rio Grande Valley, who is a longtime family friend, said Carmeli joined the Israeli army after finishing high school in Israel and was in the Golani Brigade. Carmeli was from Ra'anana, Israel, according to the IDF statement.

"He had great energy, yet had a kind and gentle soul," Hecht said. "It's been a very tough day for us," he added. "We lost a gem."

Carmeli was the youngest of three and has two sisters who currently live in Israel. He was "loved by his parents infinitely," Hecht said.

He visited Israel for the first time on a Birthright Israel trip with his younger brother and sister in June 2012, his father said. When he returned, he made an announcement to his parents that he was planning to return and join the IDF, Steinberg said. He made good on that promise less than six months later, making the move in December.

"He went back," Steinberg said. "He was completely dedicated and committed to serving the country of Israel. He was focused, he was clear in what the mission was, and he was dedicated to the work he needed to be doing."

On Sunday morning, the Steinbergs were visited by representatives from the Consulate General of Israel in Los Angeles. They broke the news of Max Steinberg's death.

Stuart Steinberg last spoke to his son at 4 a.m. Saturday California time, hours before his death. Max Steinberg called his father to tell him that his group had been injured when two of their tanks collided. They had to return to Israel for treatment at the hospital. Some soldiers had broken bones, and Max Steinberg had sprained his back, his father said.

"He called me up at 4 a.m. that morning and said he'd be returning to Gaza, back to combat, to be with his friends," Steinberg said.

Steinberg said the family is leaving on Monday for Israel, where their son will be buried. On Max Steinberg's Facebook page, hundreds of people liked a profile photo that appeared to be a selfie of him in uniform, armed, with his helmet on. Dozens gave their condolences.

Jay Sanderson, who heads The Jewish Federation of Greater Los Angeles, said in an email message to the community that "our thoughts are with his family and our community is committed to support them in any way they need - and to honor Max's memory."

The Jewish Federations of North America said in a statement that its "deepest sympathies" were with the families of 18 Israeli soldiers killed over the last two days. "Along with all of Israel, and the entire Jewish People, we mourn their loss as if they were our own," the statement said.

On Sunday night, the U.S. State Department confirmed the deaths of Steinberg and Carmeli.

"We can confirm the deaths of U.S. citizens Max Steinberg and Sean Carmeli in Gaza. Out of respect for those affected by this, we have nothing further at this time," State Department spokeswoman Jen Psaki said.

Tami Abdollah can be reached at http://www.twitter.com/latams .