Princeton Mom is out of control: How Susan Patton turned one crazy op-ed column into a mini-empire

By styling herself as the anti-feminist patron saint, Patton manages to keep buying herself time in the spotlight 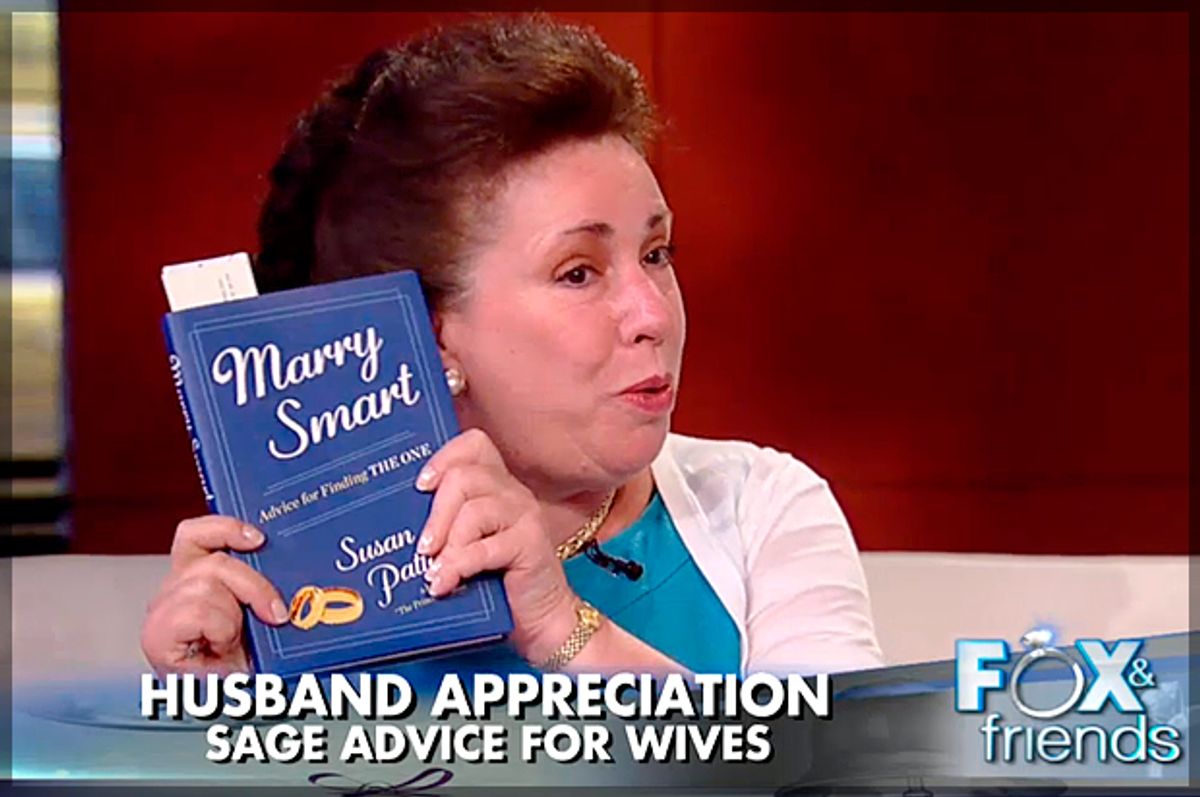 In case you somehow thought Princeton Mom faded into media oblivion after her first stint as the star of the news cycle, I'm sorry to report that you are wrong.

As a reminder: Patton is the walking bouffant who went viral last year when she penned a letter to the women of her alma mater imploring them to devote their precious collegiate hours to finding men to marry. Since the article made its debut in The Daily Princetonian, Patton wrote a book, “Marry Smart,” that expands on her ideas on the subject. For example, she advocates that women seek plastic surgery before college (sooo, like, in high school) to ready themselves for their future spouses, and she even provides percentages for how much time should be spent husband-hunting versus actually studying (in case you’re wondering, the ratio she suggests is 75:25).

It is clear that Patton is totaly okay with being defined by the wildly controversial ideas that catapulted her to infamy as well as the widespread fury she inspires whenever she expresses them. Since the release of her open letter, she has continued to solidify her brand, making multiple appearances on morning talk shows, always being introduced by her nickname, “The Princeton Mom.” Every time we see this woman, she seems to be more of a character, her dachshund sitting in her lap, her hair pinned high up to the heavens, her finger wagging in the faces of all her naysayers. She has clearly positioned herself in a branding sweet spot. Love her or despise her, she continues to exist, and thus, she wins. In the last few months, Sara Eckel challenged Patton in a roundtable at her alma mater and Kristen Schaal starred in this hilarious, satirical Daily Show segment about "Marry Smart."

On some level, you have to give Patton credit. Not for the terrible words she says or for the pretend world she’s constructed, in which women become instantly infertile at the age of 22, but for her relentless self-promotion. Even all these months after her Princeton op-ed, she continues to exploit our morbid curiosity about what ludicrous words will escape her mouth next. Take her "Today Show" appearance a few months back. To introduce her, the "Today Show" rolled a package of all of the most jaw-dropping statements from her book. After each one was read, a few female audience members, those brave souls waiting outside at Rockefeller Plaza, were selected to respond.

After hearing Patton’s assertion that learning to bake bread is an attractive sign of self-reliance, another woman replied, “I should be baking bread? Wow, that’s ridiculous.”

All the while, though these women vehemently disagreed, they seemed -- against all odds -- to be enjoying themselves. And sure, let’s be real, they were probably smiling because they were excited to be on TV, but still, they seemed to embody the experience of what it is like for all of us to listen to this retro caricature's bunkum.

Hearing Patton's rant is, for me at least, like forcing myself to listen to a Nickelback song, so tacky and bad it’s almost good. But just as there are somehow actual Nickelback fans in this world, there are also a few real fans of The Princeton Mom, people who don’t regard her words as ornery ramblings but instead as dogma. And chief among these fans are the hosts of “Fox and Friends."

Patton was recently invited on to discuss the following topic: How to keep your husband happy. In under five minutes, she managed to condemn feminism, online dating and every woman who believes she will meet a man she loves in her mid-30s. Probably the most surprising moment for me came when I actually agreed with a point she made: Be nice to your spouse. However, even in presenting this fairly rational idea, she had a crazy justification:

“Recognize the fact that there are many women who missed their opportunity entirely to marry and have children.”

She went on to say:

“Think about how difficult would it be to replace this man.”

Listen up, ladies: Don’t be nice because you love him and you believe he has value as a human being, but rather because you have no other options. Them’s the breaks, kid.

Even though it’s the same old stuff we are used to hearing Patton dish out, this segment felt somehow different. There was a sort of desperation about the way she presented herself. She sat there with a notebook poised on her lap like a comedian trying out new material at an open mic. When she raced to get in a joke about a maiden aunt who has a bunch of cats, it seemed like she’d been saving that one for a while.

This is the problem with marketing yourself as a hate-watch: It's generally a strategy that has diminishing returns. When Patton first appeared on the scene, she seemed so dead-earnest about her harebrained theory of womanhood that it was hard not to take her ramblings at least a little bit seriously. At this point, it seems more like she is parodying herself.

But Patton has somehow eked out a longer cultural lifespan than anyone could have imagined. She's spent the past few months steadily escalating her outrageousness. And by styling herself as the anti-feminist patron saint, she managed to plunk herself down at the very epicenter of the cultural outrage machine -- her haters are the ones keeping her afloat. So the saddest thing about Princeton Mom may be that for all her pearls of dismal wisdom, she's a case study in the perfect intersection of zeitgeist and personal brand.