Boxing star Jameel "Big Time" McCline tells us why he's challenging Rep. Alcee Hastings. And who wants him to stop 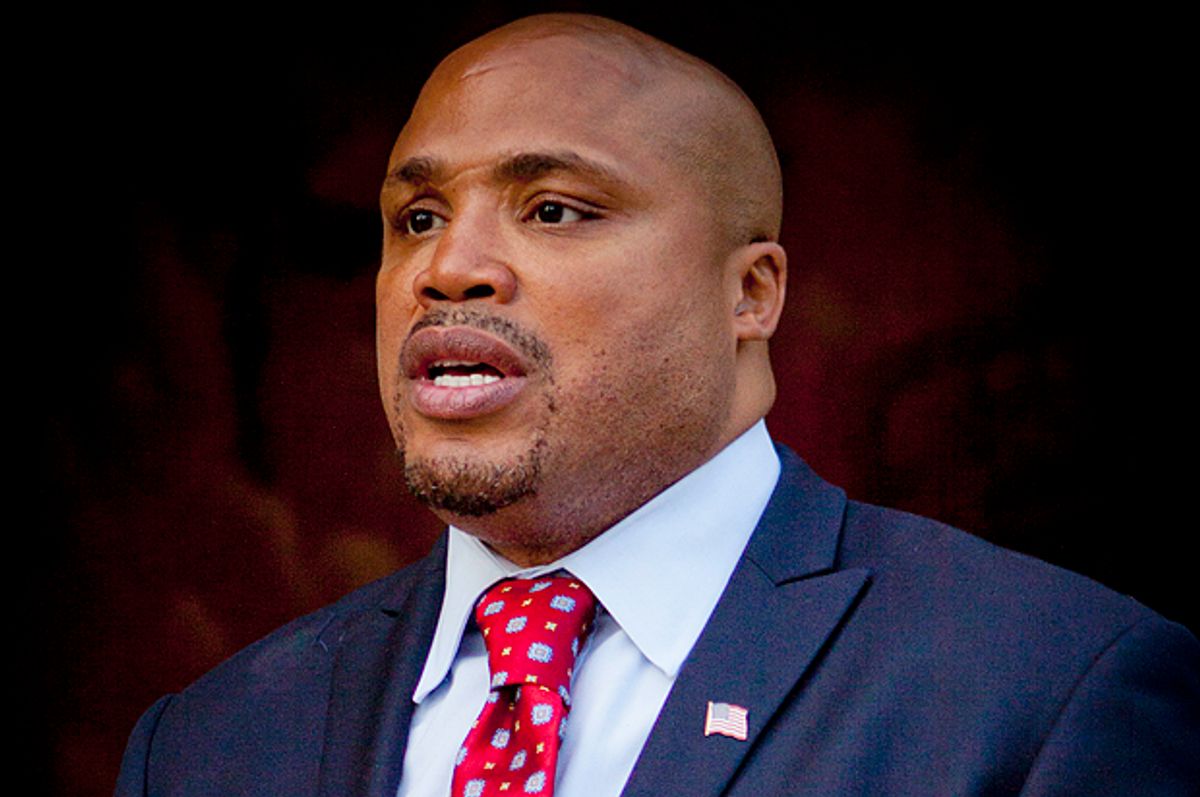 McCline, now retired from the ring and enjoying a second career as a business consultant, is certainly a long shot. Hastings has been in office since 1993 and the 20th, like many districts nowadays, is so overwhelmingly Democratic that he's never really had to worry about a serious challenge. In 2012, for example, he won reelection with about 88 percent of the vote.

Yet despite the long odds, McCline is continuing the fight, confident that his perseverance — and his overriding belief that the Democratic Party needs to be shaken out of its complacency and stagnation — will overcome a deck that in almost every way is stacked against him. Recently, Salon spoke with McCline over the phone and discussed the race as well as how the Democratic Party establishment in Florida has responded to his candidacy (spoiler: not well). Our conversation is below and has been edited for clarity and length.

Let's start by talking a bit about your background, which is quite unusual for an aspiring politician. Besides being a former championship boxer, you've also been homeless and incarcerated. How do those experiences shape your politics?

One of my biggest issues is definitely homelessness and poverty and how those people are viewed by the public at large because of the situation that they’re in. Because I was there. I was there. Not just back in the ’80s; I was there again in the mid-2000s, when I lost everything, and I was homeless for a few days and sleeping in my car. So I know what it’s like to lose everything.

I feel that my politics are very simple: We should always look to give a hand up, [but] if that person shows up back in front of you for another hand up later, they ought to have a very good reason... Because the same thing happened to me: I was given a hand up in 1994, and I never looked back again. I figured it out and made it to the top, to the very, very top, the absolute top: I was the best in the world at what I chose to do. I was the best on Planet Earth at what I chose to do. And that was because I just had determination and drive. So what I do a lot is I teach people: "Don’t just come to me for help; you have to develop within you this desire to be different, this desire to make it. I’ll give you this hand up right now. But with this hand up ... what you ought to do is make the best of it, run with it, never turn back, never look back again."

Do you feel like your background helps you understand political issues, the ones you say all politicians care about to some degree, in a more profound way? What do you have from your experience that others don't?

True empathy. True empathy is what they don’t get. Yes, they have sympathy: "Aww, I feel bad. We’ve gotta help," or "We should do this," or "I don’t think we should do that," or "We shouldn’t go this far" ... But to answer your question: it’s empathy. I’ve been homeless, and I’ve been on 150-foot yachts and everywhere in between ... So because of that, I am uniquely qualified ... to represent the down-and-out and the up-and-out ...

Let's talk a little about your opponent, Rep. Alcee Hastings. What was it that he was doing — or not doing —  that made you feel compelled to run?

To be honest with you, I didn’t even know who he was when I decided to run. I knew nothing about him personally other than his name. ... That’s all I knew. I didn’t know of his legacy, I didn’t know his popularity. I didn’t know anything about what he’d done, his policies. I decided to get into the race to run against an ideology. And that ideology is the [lack] of governmental policies that ought to be in place to help uplift the human condition.

So you weren't as concerned with him so much as taking on what you considered the status quo?

Correct. I had zero respect for status quo. I do not respect anything that is of the norm if it is not working. ... I want to be part of that change. ... When I’m asked, “why are you running?” I say because I desperately want to be a part of bringing change. Not only to this country but to history.

As you delved into the issues more and got to know Hastings' record a bit better, did your view of him change?

Considering Hastings has been in office for more than 20 years, have you heard from people within the Democratic Party who don't want you to run?

Well yes, obviously yes. I have definitely heard things like, "You don’t want to rock the boat," or heard people are very upset at me because I’m running against him ... I’ve been asked dozens of times, “Why are you running against Alcee Hastings?” as if he’s some god. ... I say to them, "Well, what has he done that [makes him] such a legend? What has he done? He’s been here for so long. Right, okay. But what has he done?" ... What has he done for the community at large? What programs has he implemented? ... No one can tell me.

Have you had any trouble fundraising, since the establishment is so supportive of Hastings?

Fundraising has been extremely difficult, to say the least. I was not able to reach the people that I need to reach in order to raise the amount of money that I need. I’m still getting everything done with my own funds, and we’re definitely getting donations, but I’m not getting donations from any of the usual suspects like corporations. And that’s fine.

You don't think that will derail you, being so short of funding?

No, because I have the stamina to go all day, every day. ... This past week, I was in front of 700 unique voters. I am holding forums. I am holding gatherings. I am doing appearances. I am showing up at whatever candidate forums I’m invited to. I’m showing up at candidate forums I’m not invited to. I’m showing up at Democratic clubs. I’m shaking hands. I’m knocking on doors. I have teams knocking on doors. I’m asking people for their vote, I’m asking people for their support. In other words, I’m constantly out there in public — I don’t rest.

This is a real campaign. ... We are combing and blanketing this district unlike ever before, and Alcee Hastings, for the first time, is definitely doing things he’s never done before. He has political signs up throughout the district [and] people are telling me, "We have never seen a sign up for Alcee. He’s never had a sign up before." So he definitely feels my presence. ... We’re doing everything we can to get out the word, because a lot of what we discovered is that there’s never been another choice. Everyone has been so afraid to run against him.

Have you received any support from outside liberal groups, like MoveOn or the Progressive Change Campaign Committee?

I have spoken to everyone that I could possibly speak to. And I’ve been wished luck ... But the national ones, no. I have been endorsed by the Fraternal Order of the Police here in South Florida. Which is a huge accomplishment seeing that I am an ex-convicted criminal ...

Are you frustrated with these groups for not embracing your campaign?

I’m very frustrated because [when I started] I was very bright-eyed and bushy-tailed and ready to go. And  then I realized that this system is definitely geared toward the incumbent ...

Considering your belief that the problems you're running to solve go beyond Alcee Hastings and are more endemic to the entire status quo and the Democratic Party, if you were to defeat Hastings and become a congressman, would you support other Democratic Party primary challengers like yourself?

I’ll say this: County and state senators and state councilmen, congressmen — I have met a bunch of them. Some of them were very rude to me. Some of them wouldn’t even take my card. Some of them wouldn’t even shake my hand. It was like, “Hey, I’m with Al.” Wait a second — when you were new, did you want to be treated this way? Just show some common respect and common courtesy. This is the democratic process. I have a right to do this. I have a right to fight for the people just like you! You officials had a right to get into the race and challenge someone you challenged at the beginning of your career, whenever that was ...

I remember saying to Debbie Wasserman Schultz, when I met her at a gala, “What makes you think I would ask you to support me? You don’t even know me.” I said to her, “I’m just a fan of yours. I’m coming over to say hello and I won’t even have my photographer take a picture if that’s not what you want. I’m just introducing myself." She goes, “You can take a picture but please don’t use it anywhere.” And I was like “You know what? We don’t have to take a picture.”

What happens is that these people become rock stars, they become popular, and they can get away with stuff and just do whatever they want. And they’re supported by their colleagues just because they’re in that club. And I don’t work like that. I will not work like that, and I will support anyone who has an ideology of upward movement, not just rhetoric of upward movement, but a real ideology, a real background of fighting for the little guy and performing for the little guy.