"It was an out-of-body experience": Stephan Eirik Clark on his novel getting the "Colbert bump" 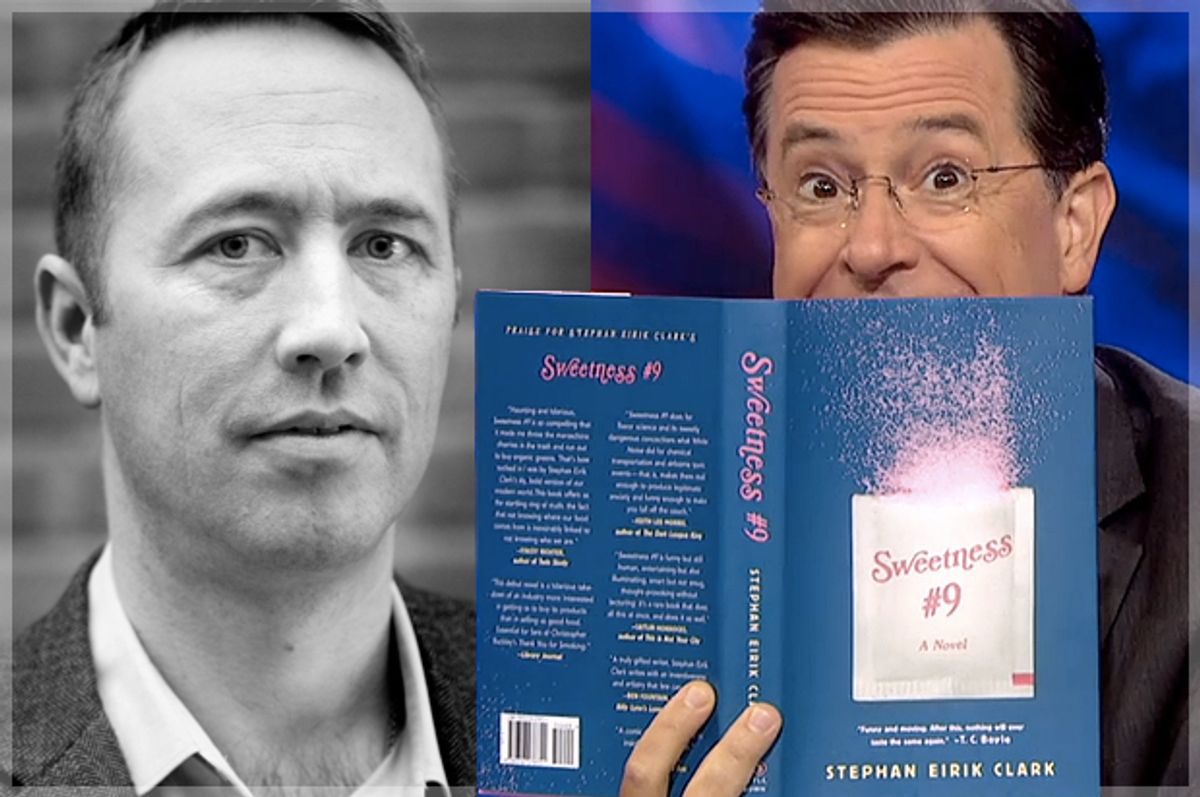 As Stephen Colbert and his publisher, Hachette, continue their feud with Amazon, the comedian is using his celebrity profile to help the Hachette writers who sometimes suffer from Amazon's strong-arming: debut novelists. On Monday, Colbert interviewed "California" author Edan Lepucki, catapulted into the American consciousness and onto the New York Times Bestseller list after Sherman Alexie recommended her novel "California" on "The Colbert Report." Now, Lepucki is even entertaining the possibility of a film adaptation. "The Colbert bump" is a proven phenomenon; sales have been known to shoot up when Colbert or a guest mentions a book on his show. So Colbert then asked Lepucki to give a bump to another debut novelist with Hachette. She recommended writer Stephan Eirik Clark for his upcoming novel, "Sweetness #9."

"Stephan, I'm going to ask you to pick two of those three names," Colbert joked, adding, "if you're looking for another book to bump, that'd be the one."

Clark, who has previously published a collection of short stories called "Vladimir's Moustache," is an assistant professor at Augsburg College in St. Paul, Minnesota. His debut novel, which arrives Aug. 19, is a satire that takes on the food processing industry. Salon spoke to the writer -- as one of the few authors to have ever received the auspicious "Colbert bump" -- to see how his life has changed in the past 24 hours.

"I can never use the word 'bump' again without thinking about him," Clark said.

What was your initial reaction?

I was stunned. I knew it was coming but it was still so, you know, momentous, I didn’t know quite how to react. I watched [the show] last night, I had a reading with Pam Houston last night, at this MFA that I’m teaching at. And we all went over to the dorm afterward and watched in on the big screen. And we saw it and it was incredible. And then I woke up in the morning and the clip came on the website, and I watched it again and I realized I didn’t remember more than the effect of it; it was like I was seeing it again, ya know, I think I was having an out-of-body experience or something.

How did you find out?

My publisher got on the phone with me and my agent on Friday, and I think Edan had about three hours to prepare for her first mention on Colbert and I had three days, so it was kinda, is it really going to happen, you know. I didn’t know what was going to happen, I just knew in some way it was going to be referenced, so I was kinda just disbelieving until there it was, in fact it happened. And then, like I said, I was blown away, stunned, and incredibly grateful.

Did you have any idea that you were going to be featured so prominently?

No, like I said, I had no idea what it would be like. I just knew that I should tune in and that I should watch and that was enough to get me incredibly excited and, you know, I still, I don’t think I quite understood what the significance was, even though Edan got such a great jump after her first mention, I thought, "oh this is great," and I didn’t quite realize that sales would seemingly jump even this first day. I guess I’m kind walking in a zone of disbelief or still a little bit stunned.

What changes have you noticed?

I woke up this morning very early, couldn’t sleep very well, and my Twitter feed had sort of exploded and I had to turn off notifications because my phone was beep beep beep. So I thought, well, let's see what it looks like on the bookstores, and I saw that on both Powell's and Barnes & Noble it had jumped up a lot. It was unranked on Powell's and I saw I was the No. 3 bestseller there, which seems like I might still be sleeping, but that was the news at 5:30 and it seems that I’m awake now.

Colbert referred to it as "the Colbert bump" -- is that a phenomenon that’s ever been talked about in the writing community? Seems like it’s a real thing.

Right, right. It’s a real thing and I can never use the word “bump” again without thinking about him and wanting to thank him for mentioning the book. So it is a very real thing. I certainly didn’t talk about any bumps in grad school, but I think with the way things are today, people want to talk about books and to me it’s very exciting that so many people are talking about the Colbert bump because even though it was a very prominent display on the show, it was still only a minute or two, and yet it’s allowing us to talk about books and that’s a rare thing today. And I think this shows more than just an interest in my book... I think it shows an interest in literary culture and so many people wanting to defend it. And that’s equally gratifying as anything that might come to me personally.

Where did you get the idea for “Sweetness #9” and how did you develop that?

I hadn’t really thought about artificial sweeteners and the role that they played in my life until I read Eric Schlosser’s “Fast Food Nation.” The chapter in that book, “Food Product Design,” introduced me to the idea of flavorings. Before then, it had sort of been like gravity and electricity, something that was all around me, all the foods that I was eating were sweetened or flavored or what have you but I hadn’t really thought about it, like you sort of take gravity for granted. And after that I couldn’t really help but think about the role it played in my life. And I just started to wonder if I was eating really food or if I was eating more the idea of food. Because flavorings can mask as well as they can enhance… so what are we really eating? Flavor’s always had a role in the natural world. If something’s sweet it’s usually good for you, if it’s bitter it might be poisonous, if it’s sour it might not be ripe. And whenever you put the human hand in there you’re sort of removing yourself from that natural cycle of interpretation and so you don’t know now if what you’re eating is going to provide you with health, energy, and whatnot, or if it just tastes really good. So I became obsessed with the ideas and all of the implications of that. And so the book is an exploration of some of those ideas and philosophies and anxieties and a 13-year sort of meditation on the subject.

I’m working on another novel and it’s called "American Gulag" and it imagines the collapse of the U.S. dollar at a time when the people who are too big too fail are actually punished.

Of course, the last logical question would be, if you could give the “Colbert bump” to any new Hachette writer, who would it be?

I don’t know. You know, I know a lot of debut novelists, and I know a lot of authors from Hachette who are not debut authors. And I don’t necessarily only read debut authors. Like anybody else, I just read in my area of interest. And you know, I read Joshua Ferris’ recent novel and really enjoyed it. I’m really looking forward to David Bezmozgis's next novel.

There are some debut novelists who’ve already come out with books: Ted Thompson, Gabriel Roth, but I’m actually looking forward to finding out more about some of the books that will be coming out from Little Brown. I’m also a father of a 1-year-old or a 5-year-old, so I don’t read book as quickly as I did when I was a grad student, so I get through what I can and hope to get into some more in the future.

Any last words about the power of the Colbert cameo?

My first book was a collection of short stories that came out with a very small publisher, and whenever you come out with a book you hope you can find readers and even with that book I didn’t have very high expectations: A), because it was a short story collection and B), because it was a small press. But still the response was even less than I had expected; it was just very hard to find readers. And this time, instead of meeting that fate, it looks like I’m finding some readers and that’s just incredibly gratifying to know you’re not just writing just for yourself.