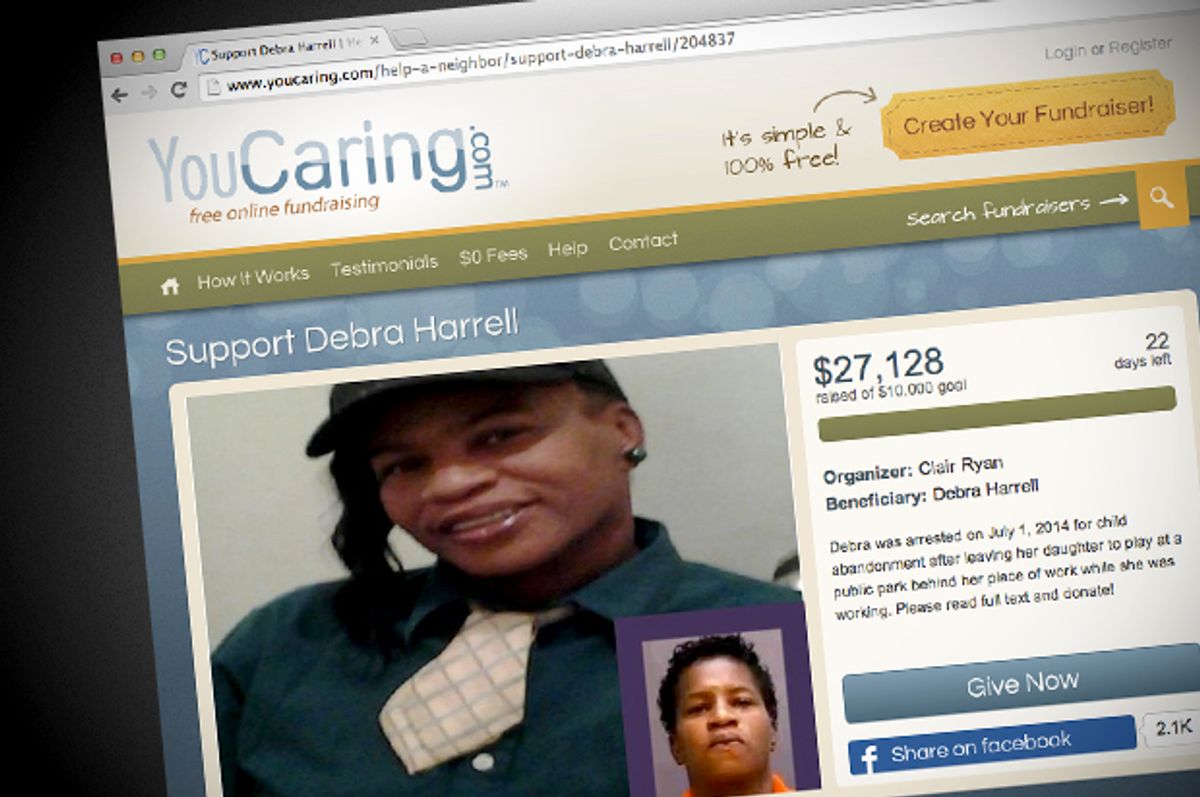 Debra Harrell is no longer in jail after being arrested for letting her 9-year-old daughter play at a nearby park while she was at work, but her ordeal isn't over. Though she has been reunited with her daughter, Harrell is now out of a job, according to a report from ThinkProgress. Harrell's lawyer confirmed to writer Bryce Covert that she was fired following her arrest, though a spokesperson for the fast-food chain declined to comment.

While many have rightfully argued that Harrell's decision to allow her daughter to play outside was not negligent, the other reality is that Harrell's other options were very likely limited at the time she made that call. As Covert points out, the average wage at McDonald's is under $8 an hour, and cost for a week of day camp runs around $300. At the same time, state assistance for families who need child-care has declined by more than 30 percent in South Carolina, mirroring a national trend that leaves fewer children with reliable care.

It's heartening news that Harrell is out of jail and back with her daughter, but nothing has changed about her fundamental predicament. She continues to face the same problems she was facing before -- only now without a job. A crowdfunding site has raised more than $27,000 to help her out, which will go a long way to help her while she figures out her next step. Similar to the outpouring of support for Harrell, people in Arizona and across the country put together a fund of more than $100,000 for Shanesha Taylor, a mother who was arrested and charged with felony child abuse after leaving her children in a car for 45 minutes while she went on a job interview. (Taylor is now out of jail and has struck a plea bargain in her case, but she has not yet been reunited with her children and is being forced to take state-mandated parenting classes as a requirement of the deal.)

This kind of financial and community support is inspiring and often vital for the people who receive it, but it's also a bandage. Fixing our badly broken system remains crucial if we want to keep parents out of jail for simply parenting their children in the face of overwhelming obstacles. Like Harrell, Taylor did not have access to child-care when she needed it. And Like Harrell, Taylor lives in a state that has decimated funding for child-care subsidies in recent years.

As Laurie Roberts at the Arizona Republic noted at the time of Taylor's arrest, both the Arizona state House and Senate had rejected proposals to restore child-care subsidies for the working families, which had been cut by 40 percent. Addressing the issue, Senate President Andy Biggs said that the lack of access is not the government's responsibility because the government, he argued, is not obliged to be “compassionate or merciful.”

Most parents struggling to raise a family on poverty wages don't make national headlines, so -- no matter how generous and eager to provide support people may be, and no matter how incredible this kind of activism is -- crowdfunding isn't an option for everyone. But these are problems that have policy solutions, ones that people in Congress and state legislatures across the country need to be grappling with as public pressure mounts. Lucky for these lawmakers, people also tend to really like these policies.

Policies like raising the minimum wage, since two out of every three minimum-wage workers is a woman, many of whom are the heads of their households. Equal pay measures that can help narrow the pay gap, and begin to rectify a lifetime of lost wages. (Women with a college degree or higher lose $713,000 over a 40-year period versus a $270,000 loss for women who did not finish high school, according to data compiled by the Center for American Progress.) Paid sick time and paid family leave, so that staying home with your kid for an afternoon won't mean risking your job.

Self-advocacy, community action and sustained pressure from the public helped Harrell and Taylor fight for their rights as individuals and parents, but the profile of their cases reminds us -- should continue to remind us -- that the problem is much bigger than gross injustices faced by two women on opposite sides of the country. The solution has to be, too.