Unruly monkeys are stealing, breaking into cars, biting, and even killing citizens in India's capital 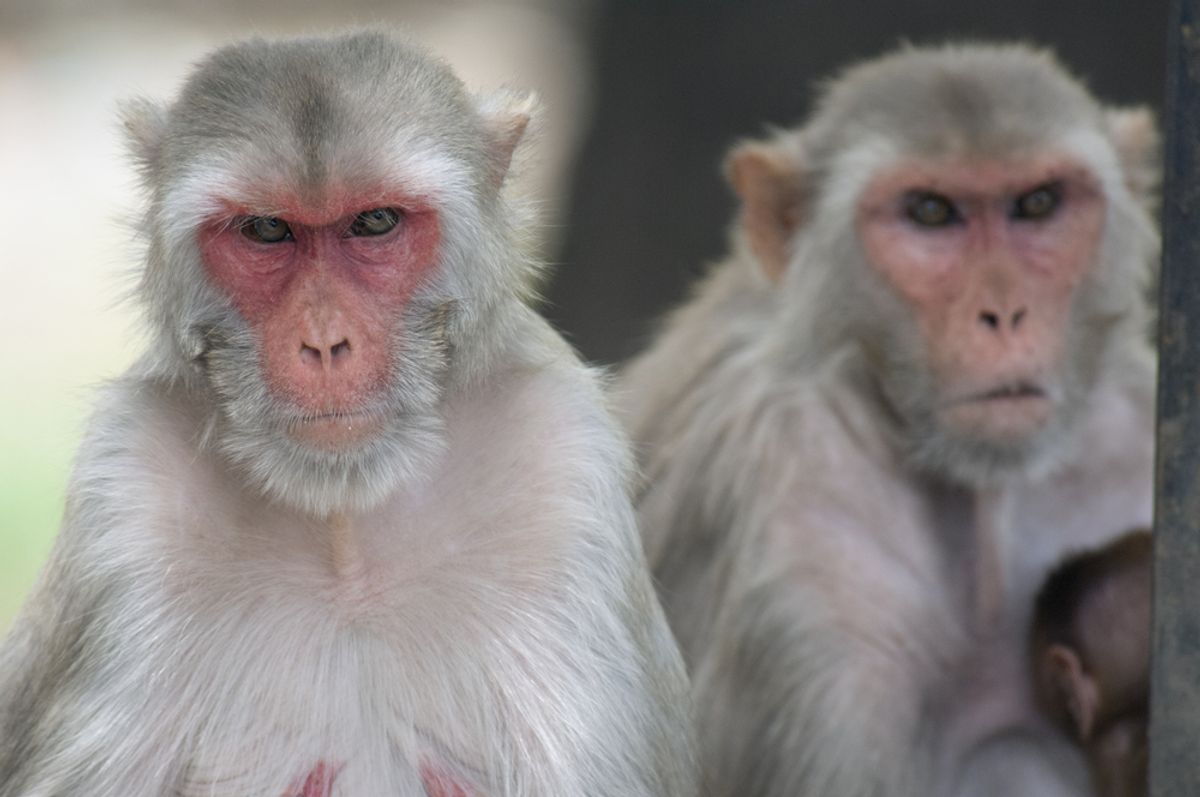 Madi is a bully. He has three-inch canines that glisten when he snarls.

And that’s a good thing, says his owner, Niraj.

Madi is a langur — a large, grey monkey with a black face and ears, endemic to South Asia.

Big and menacing, he’s able to scare off this city’s 30,000 smaller, red-faced rhesus monkeys, to protect the local human population from their naughty and dangerous antics.

Niraj earns his living hauling Madi around India’s capital on his bicycle to scare away monkeys that hang around parks, rob offices (really) and terrorize people.

It’s hard to over-emphasize this point: India’s rhesus monkeys are derelicts. They regularly steal food, alcohol, glasses, medical equipment, and clothes. They even break into cars.

To combat them, the langur men used to be a common sight around Delhi’s political and diplomatic areas, especially during visits by high-ranking foreign officials.

The problem is, it’s illegal to keep langurs. They are a protected species, and in November 2012, the environment ministry cracked down. The ministry told government departments and agencies that langurs are covered by India’s Wildlife Protection Act, and that people who own, trade or hire out langurs face up to three years in jail.

The New Delhi Municipal Council (NDMC) duly canceled its contracts with around 30 langur men, who were paid about 10,000 rupees (about $165) a month to patrol the city.

Yet Niraj and the other langur men haven't gone away. They still operate, in secret, relying on a black market wildlife trade.

Many people feed monkeys on Tuesday and Saturdays — days associated with the monkey-faced Hindu god Hanuman. This practice means that people carrying food at other times risk being bitten. Around 90 percent of the monkeys carry tuberculosis.

Children are often more vulnerable to attack, and people have even died as a result. In 2007, New Delhi’s deputy mayor, Surinder Singh Bajwa, perished after being attacked by monkeys at his home. He fell from his terrace, causing a serious head injury.

Since the ban on langurs, government officials have complained that monkeys have wrought havoc by getting into their offices.

So Delhi continues to rely, unofficially, on its langur patrols.

When I met Niraj, he was cycling to a school in Chanakyapuri — the heart of Delhi’s diplomatic district — with his assistant Suraj and his langur, Madi, who was perched on the back of the bike, a rope around his neck.

“They slap the red-face monkeys and scare them away,” Niraj said. “We work for politicians, at their bungalows, everyone. But if you need one on private property, you can.”

When challenged about the langur ban, Niraj claimed there was nothing illegal about owning a langur. He insisted on performing a parody of a traditional Indian greeting, by touching Madi’s feet as a mark of respect. In response, the langur touched his head. Niraj’s assistant held the leash warily.

“The government makes sure we take care of the monkeys so they have injections and medicine and proper care,” he said. “Not anyone can keep a monkey, only with permission of the NDMC.”

Anil Kumar, deputy director of NDMC enforcement, was surprised at this claim.

“We don’t have any langurs. We have monkey catchers. [The monkeys] are taken to a sanctuary in south Delhi. The catchers have a rope in a loop and put it round the monkeys.

“About six months ago we were doing it. Now we do not keep any langurs, nor do we have any private companies working for us.”

When a Hindi-speaking colleague called Niraj back, posing as someone who wanted to buy a langur, Niraj told a different story.

He admitted that he knew the trade was illegal and said that the langurs were kept in secret, often taken undercover in cars to prevent them being spotted by police.

He repeated his claim that Indian politicians flout the ban by hiring him, and he hopes that Narendra Modi’s newly elected Bharatiya Janata Party government might relax the rules and allow langurs to be used again.

Until then, Niraj doesn't advertise his services. Instead he relies on an unofficial network of domestic servants and gardeners employed by Delhi’s richest residents.

Although monkeys are most visible in central Delhi, they are also common in the so-called “farmhouse” areas of south Delhi where expats, politicians and high-ranking Indian executives live.

One executive who lives in a farmhouse spoke to GlobalPost on condition of anonymity.

“We had lots of problems with monkeys,” the executive said. “We had to take steps after my maid’s young daughter was bitten by a monkey. People said to get a langur. But the monkeys mobbed the langur and beat it up. They’re not stupid — they outnumber the langur. We tried all sorts of things and the only thing that really works is a man with a big stick.”

The NDMC and the Delhi government are taking other measures too. The handful of monkey catchers employed by the council round up about 500 a year with their lassos.

India’s Central Zoo Authority has been working with the National Primate Center in California to reduce the monkey population by using contraceptives left in food and sterilization of captured monkeys. A pilot program is taking place in the northern state of Uttarakhand.

And the NDMC has been negotiating with an Indian company to supply electric shock tape for government buildings. The makers of Avi-Simian Shock Tape, which runs off a simple main socket, claim monkeys and birds receive a small electric shock when touching the aluminum wires in the tape.

But for now the monkey population remains in complacent control of New Delhi.