The right's "Planet of the Apes" moment: New depths in climate denialism 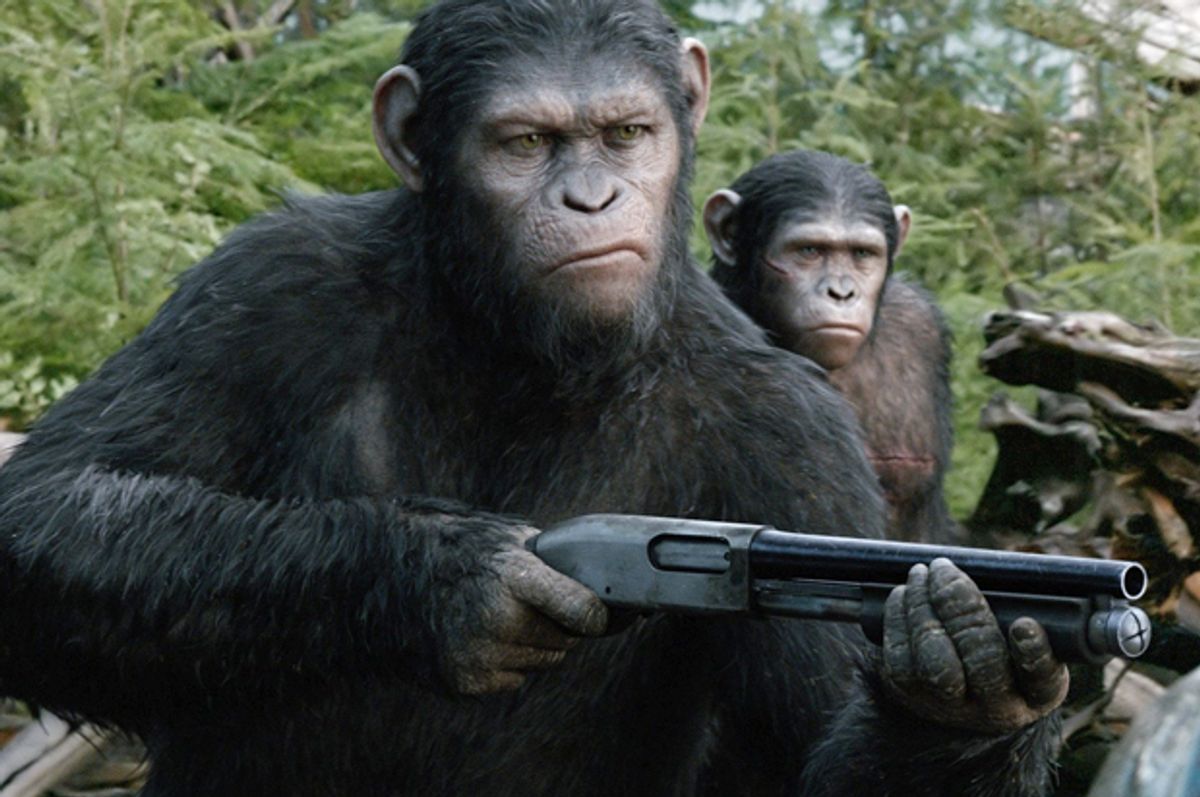 Heritage Foundation economist and climate change bullshit artist Stephen Moore has seen the future. It is a nightmarish, dystopian hellscape in which the United States of America has no electricity because scheming environmentalists have brought their radical plans to fruition.

This latter-day right-wing Cassandra experienced his disturbing vision after going to see the new “Planet of the Apes” movie. “Could the radical-Green movement in America make mankind’s future resemble a science-fiction Earth ruled by apes?” Moore asks with apparent seriousness in a blog post for National Review.

This weekend I went to the see the blockbuster movie "Dawn of the Planet of the Apes," and an Investor’s Business Daily editorial this week got me thinking about a bleak scenario. Our future won’t have ape rulers, but, IBD points out, a world without energy might well look similar.

In the movie, bands of humans are resisting a global government of super-intelligent monkeys, gorillas and the like. The humans lack access to electricity, making their struggle — let along [sic] the normal life we know today — nearly impossible.

It’s a rare thing to see such a blatant bad-faith presentation of your ideological adversary’s position as Moore’s suggestion that the green movement’s endgame is “a world without energy.” That’s not what environmentalists envision – it’s not even physically possible to rid the world of “energy.” But Moore keeps coming back to it: “Energy is the master resource. Without it, we return to a Stone Age existence. Life in its absence is nasty, brutish and short.”

That’s what Moore sees as the end result of government action to fight climate change, like the Environmental Protection Agency’s new rule capping carbon emissions from existing power plants. “Electric power and fuel will become more expensive,” he warns, and from that modest rise in electricity bills we plunge headlong into dystopia. “America’s future may not be a chaotic world of climate change,” he writes, “but a pre-modern one without the luxuries afforded by plentiful energy.”

As for the costs of implementing policies to combat climate change, it is true that the best way to reduce consumption of fossil fuels is to make them more expensive. For its part, the EPA estimates that prices for electricity will go up something like four to seven percent by 2020, but those increases would be offset by greater energy efficiency. But for someone like Moore, who believes against all reason and persuasion that climate science is wrong, any deviation from the cheap, dirty splendor of fossil-fuel combustion is unconscionable and merely a sop to radical “greens,” weirdos who want to expunge all electricity from the globe.

And what exactly would this horrific, electricity-free society look like? Well, Moore writes that he and his family have already experienced that nightmare.

Last summer our suburban home in northern Virginia lost power for two days during a storm. No lights, no computers, no air conditioning, no TV, no iPods or iPhones. To my three sons, this was like hell on earth. How did people live without electricity? They wondered. Very poorly, I told them.

As it turns out, the Moore family tends to lose power quite often, and each time they do Moore transforms his family's minor inconvenience into a lazy commentary on the evils of environmentalism. Here’s what Moore wrote in May about the blizzard that knocked out their electricity last winter:

You can't produce much of anything if you don't have affordable electric power.

My children learned that lesson the hard way when we lost our electricity due to a blizzard several months ago. Welcome, I said to my kids, to the 19th century. They didn't like it too much.

And two years ago, Moore wrote a Wall Street Journal op-ed about how he lost power during the June 2012 derecho that blew through the D.C. area:

Last weekend the Moore household was one of nearly a million homes in the Washington, D.C., area without power. The temperature was between 95 and 105 degrees and it was so humid you felt like you needed gills to breathe.

Sure, I explained to my three children, we're miserable, but look at the bright side: Think how much we've reduced our carbon footprint! Consider it a life lesson in what it means to live green.

My guess is that after these three blackouts, the kids have learned the anti-environmental lesson pretty well, so it could be time for Moore to invest in a back-up generator. Or maybe some solar panels.

Hah, I’m only kidding -- that’s just what the damn, dirty apes want us to do.