GOP's George Costanza moment: The "Moops" doctrine and the war on Obamacare

Republicans gloat over an Obamacare court case that poached its legal reasoning from "Seinfeld." No joke 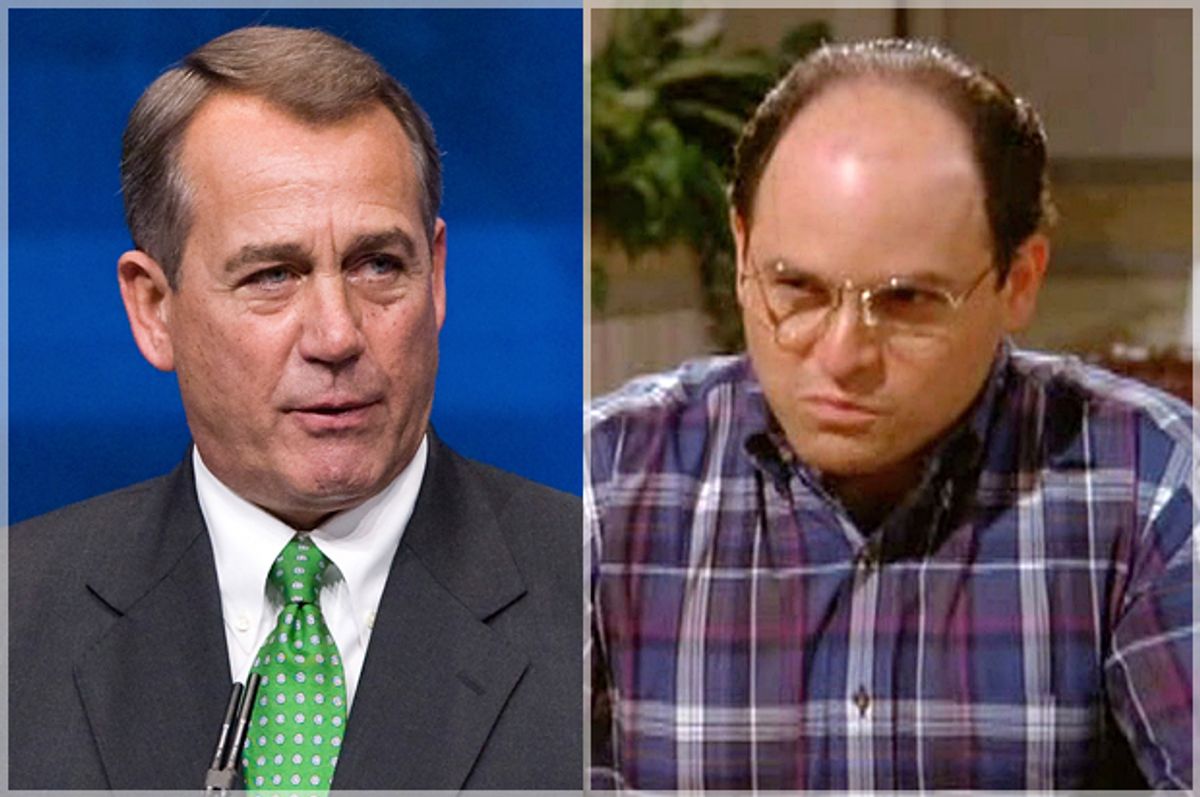 The D.C. Circuit Court’s decision in Halbig v. Burwell came down yesterday, and in an anticipated but no less galling turn of events, a pair of Republican-appointed judges ruled that a single poorly worded snippet of the Affordable Care Act invalidates subsidies for people who purchased health coverage through the federal exchanges. Those exchanges were set up for the 36 states that declined to build their own exchanges, so the practical effect of the ruling would be to make health insurance more expensive for roughly 4.6 million people spread out across some of the country’s poorest states.

Supporters of the Affordable Care Act point out that, the sloppily written language notwithstanding, the full text of the law clearly indicates that its drafters intended for the government to subsidize health plans purchased through the federal exchanges. These two judges, however, argued that a narrow reading of one out-of-context sliver of the bill trumps all, and ruled in favor of eviscerating the ACA and causing massive chaos in the insurance market. It’s the sort of thing that conservatives used to denounce as “judicial activism.” (A separate ruling yesterday from the Fourth Circuit Court of Appeals upheld the legality of the subsidies.)

I’ve been trying to figure out how to best characterize and/or mock the legal reasoning at play behind the Halbig decision, and I think it can be boiled down to one word: Moops.

I’m referring, of course, to George Costanza’s famous game of Trivial Pursuit against the Bubble Boy, in which Costanza tries to cheat his way out of losing by taking advantage of a misprint on the answer card: “Moops” instead of “Moors.”

“I’m sorry, the card says ‘Moops,’” Costanza replies, adopting an absurdly narrow and nonsensical interpretation of the rules that furthers his own interests. It’s a pretty good match on the logic, and the happy coincidence that the situation pits a whiny, lying jerk against a person in need of substantial medical care only bolsters its relevance.

And that gets to the larger point: Conservatives and Republicans are celebrating the fact that two judges indulged in some tortured legal logic in order to deny millions of people the subsidies that make their health plans affordable. The plaintiffs’ case in Halbig is a transparent attempt to sabotage the Affordable Care Act, and the people cheering on that sabotage are signaling that they’re fine with a whole lot of collateral damage just so long as Obamacare takes a hit too.

That’s a morally dubious position to maintain. It’s also a tough sell politically. For a Republican politician in a red state, refusing to set up a state-based exchange was an easy choice to make – you could be on the right side of argument politically, and the feds would step in to make sure that no one in the state would miss out on the benefits. But if the subsidies were to disappear, those same politicians would suddenly find themselves in the position of having to actually do something to mitigate the damage. Brian Beutler writes at the New Republic:

If you're a Republican senator from a purple Healthcare.gov state—Wisconsin, Pennsylvania, Nevada, North Carolina, Florida, Ohio, and others—you'll be under tremendous pressure to pass the legislative fix. If you're a Republican governor in any Healthcare.gov state, many thousands of your constituents will expect you to both pressure Congress to fix the problem, and prepare to launch your own exchange.

But because the ruling dealt with Obamacare, and because Republicans are ideologically bound to be in opposition to the law, there was no shortage of GOP legislators putting out statements supporting the Halbig ruling and, in effect, higher health costs and reduced access to health care. Some of them, like Ted Cruz, just put it right out there and said hooray for the end of “insidious” healthcare tax credits: “This decision restores power to Congress and to the people and if properly enforced, should shield citizens from Obamacare's insidious penalties, mandates, and subsidies.”

Speaker John Boehner put out a statement that didn’t make any actual sense. “Today’s ruling is also further proof that President Obama’s health care law is completely unworkable.  It cannot be fixed,” Boehner said, referring to a law that could be easily fixed by a small legislative tweak and is actually doing a pretty good job of providing health insurance subsidies. “Republicans remain committed to repealing the law and replacing it with solutions that will lower health care costs and protect American jobs,” Boehner continued, gliding right past the fact that the Republican Obamacare replacement “solutions” don’t actually exist.

The bottom line is that there are millions of people are newly and affordably insured courtesy of the Affordable Care Act’s tax credits, and they are generally happy with their coverage. And Republicans are celebrating that they could lose it all because two judges ruled that the card does, in fact, say “Moops.”