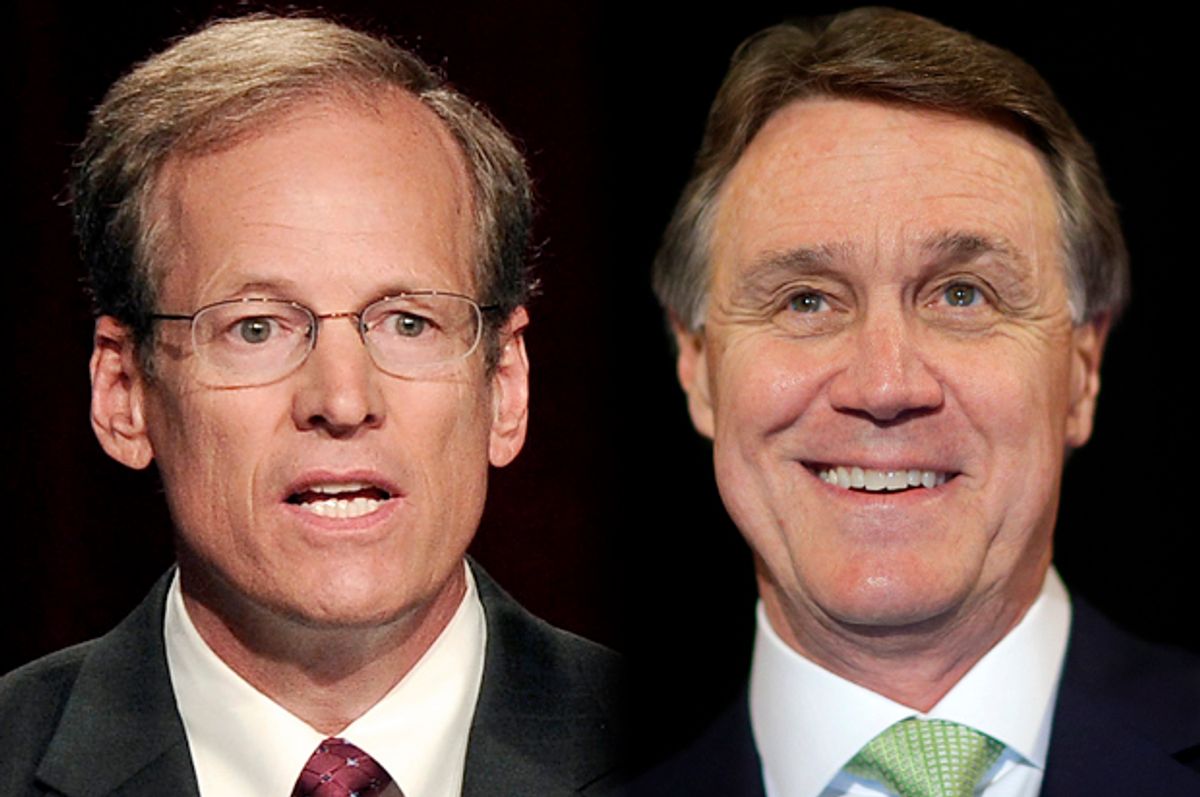 At long last, the Georgia Republican Senate primary ended last night, with businessman self-funder David Perdue barely fending off 22-year congressional appropriator Rep. Jack Kingston in a runoff. (More great, spot-on work from pollsters this primary season.) Perdue will face a viable Democratic challenger in Michelle Nunn. The most recent polling shows Nunn with a single-digit advantage over Perdue, but Perdue should expect a bump now that the GOP has finally settled on a nominee.

It's been a while since we checked in on the mess in Georgia. But don't worry, the general contours of the race remained the same as ever, through to the end: completely insane, with two fairly "establishment," business Republicans engaged in a mad dash to the rightward pole to determine who would win the title of champion demagogue of the year.

But as it was during the initial primary bout, so it was during the runoff: Immigration, and who was more super-duper-opposed to amnesty -- and the oft mentioned but rarely explained secret amnesty plot -- had been the primary focus of demagoguery.

One of Kingston's final ads depicted Perdue as a mannequin being led around the state. (THE IDEA IS THAT HE'S A PHONY.)

The narrator proclaims that Perdue, in addition to supporting "Obama's Common Core" (he doesn't), "sat on a board promoting amnesty for illegal immigrants." The text "Perdue: Amnesty" appears in big letters on the screen. "A subsidiary of the National Retail Federation supported a so-called amnesty bill when Perdue was on the NRF board," the Atlanta Journal-Constitution explained, "but Perdue says he would support no such thing in Congress." Indeed, he has made it very clear that he would not.

Then it was Perdue's turn to make a stupid amnesty attack ad about Kingston. "Jack Kingston's pro-amnesty vote is bought and paid for," the narrator tells us, before an image of hundreds of babies CGI'd onto the west lawn of the Capitol. (Crybabies had been a recurring metaphor in Perdue's ads.) "Kingston's largest backer is 100 percent openly pro-amnesty." One hundred percent. Openly. Pro-amnesty. Oh. My. God.

It is true that Kingston's most high-profile backer was the Chamber of Commerce, the business lobby that's wading into Senate primaries across the country this year to prop up "establishment" candidates. And it's also true that the Chamber of Commerce supports comprehensive immigration reform legislation that includes a path to citizenship for undocumented immigrants. But we know pretty well by now that the Chamber is willing to dish out millions and millions of dollars to prop up their endorsees even when they trash CIR, and amnesty, constantly, just as Kingston had been doing throughout the campaign.

The Chamber retaliated over the ad, telling the press that Perdue twice unsuccessfully sought the Chamber's endorsement. And of course he did. He is the former CEO of large corporations. His opponent is a 22-year congressional insider and appropriator. These are what we call "corporate Republicans," or "business Republicans." Their purpose in life is to go to Capitol Hill and look out for "big business interests." They both dearly craved the endorsement of the Chamber of Commerce, the ultimate big business lobby, which supports immigration reform for big business reasons. One of them got it, and then both turned to the public and railed about The Illegals for months. In "real life," neither probably cares about amnesty at all.

Perdue is locked into the anti-immigrant position now. There's no way he can support comprehensive immigration reform with anything even approaching a path to citizenship after waging such a vehemently anti-amnesty campaign. (Then again, he could always try. We hope he does because that would be hysterical.)

The far-right position that Perdue and other GOP Senate candidates have staked out on immigration makes Lindsey Graham's comments over the weekend seem even more delusional. He suggested that the House start from scratch on immigration reform next year and then pass it on to the Senate. Even in the highly improbable scenario that the House did pass CIR, who's to say that the Senate would pick it up? Because there are going to be fewer and fewer amnesty "squishes" in the Senate GOP conference next year.